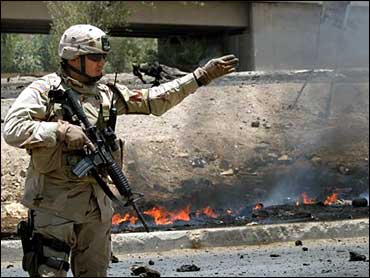 U.S. Marines and Iraqi forces have killed about 50 insurgents so far in battles that raged Saturday inside a dusty frontier town in the American military's latest campaign to stop the infiltration of foreign fighters from neighboring Syria.

Operation Spear, or Romhe in Arabic, was in its second day in Karabilah, about 200 miles west of Baghdad. Karabilah has long been considered an insurgent hotbed.

The campaign is being waged by about 1,000 Marines and Iraqi forces, backed by main battle tanks, in the volatile Anbar province. About 100 insurgents have also been captured, the military said.

"Approximately 50 insurgents have been killed since the operation began" Friday, Marine Capt. Jeffrey Pool said from Ramadi, the provincial capital. "There have been no additional reports of military or civilian casualties as a result of the operation. No aviation assets have been
damaged or destroyed."

At least 1,718 members of the U.S. military have died since the Iraq war started in March 2003, according to an Associated Press count.

Operation Dagger, or Khanjar in Arabic, aims to uncover insurgent training camps and weapons caches in the southern part of the Lake Tharthar area in central Iraq, northwest of Baghdad. The region was the focus of a major campaign in late March that killed more than 80 insurgents.

"Operation Khanjar is focused on locating hidden weapons caches and denying insurgents sanctuary in the area that is a suspected insurgent and terrorist logistical hub," Pool said.

In Karabilah, Marines and Iraqi forces backed by main battle tanks fought their way into the town. U.S. fighter aircraft on Friday dropped bombs and the tanks fired shells at insurgents holed up inside buildings.

"Marines and Iraqi soldiers continued operations through the night securing key objectives in and around the city while conducting presence patrols in order to hamper the insurgents movement," Pool added.

During their sweep, four Iraqi hostages were found "beaten, handcuffed and chained to a wall in a bunker located in central Karabilah."

No American or Iraqi military casualties were reported during Operation Spear or Operation Dagger.

Marines carried out two major operations in the Qaim area last month, killing 125 insurgents in the first campaign, Operation Matador, and 14 in the second, Operation New Market. Eleven Marines were killed in those two actions, designed to scatter and eradicate insurgents using the road from Damascus to Baghdad.

"The operations objectives, to root out insurgent and foreign terrorist presence within the city and deny them the use of Karabilah as a sanctuary, are similar to Operation Matador conducted by Marines May 7 to 14 in Western Al Anbar. However, Operation Romhe has an increased participation of Iraqi security forces," Pool said.

The new campaign began just before dawn in the desert wastes around Karabilah and Qaim, a lawless town west of Baghdad that squats at the crossroads of an insurgent smuggling route leading into Iraq from neighboring Syria.

During Friday's assault, troops captured about 100 foreign fighters and discovered at least one car bomb factory, said Col. Bob Chase, chief of operations for the Second Marine Division. He said U.S. and Iraqi troops encountered some resistance, but didn't characterize it as significant.

Iraqi troops did not participate in the earlier anti-insurgent offensives but Chase said this time they not only fought alongside Americans, but used their language skills and knowledge of the area to spot foreign fighters.

U.S. military intelligence officials believe the area in Iraq's western desert is the main entry point used by extremist groups such as Abu Musab al-Zarqawi's al Qaeda in Iraq to smuggle foreign fighters into the country. Syria is under intense pressure from Washington and Baghdad to tighten control of its porous 380-mile (610-kilometer) border with Iraq.

The area has been flush with insurgents in recent weeks. Marines carried out June 11 airstrikes that killed about 40 militants after a nearly five-hour gunfight on the outskirts of Karabilah. Insurgent in the area also killed 21 people--beheading three of them--thought to be a group of missing Iraqi soldiers. The bodies were found June 10.

At least 1,095 people have been killed since Prime Minister Ibrahim al-Jaafari's Shiite-led government was announced in late April.