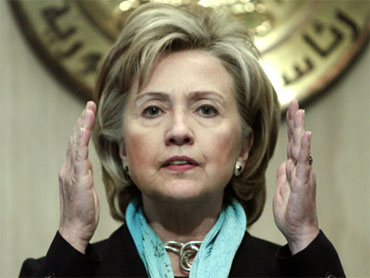 Secretary of State Hillary Rodham Clinton defended the U.S. stance toward Israeli settlement building to worried Arab allies on Wednesday, saying Washington does not accept the legitimacy of the West Bank enclaves and wants to see their construction halted "forever."

Clinton met for an hour with Egyptian President Hosni Mubarak during a hastily arranged stopover in the Egyptian capital to soothe Arab concerns that Washington is backing off demands for an Israeli settlement halt. The fears were sparked on Saturday when Clinton, with Israeli Prime Minister Benjamin Netanyahu at her side in Jerusalem, praised his government's offer as unprecedented.

She has since tried to clarify the remarks, saying that the Israeli offer does not go far enough. Still, she has indicated that the Palestinians should resume negotiations with Israel without a full settlement halt as they demand.

On Wednesday, Clinton insisted "our policy on settlement has not changed."

Of the Israeli offer, she said, "It is not what we would prefer because we would like to see everything ended forever."

"But it is something that I think shows at least a positive movement forward toward final status issues being addressed," she said.

Palestinian President Mahmoud Abbas is sticking to his refusal to resume negotiations until Israel stops building settlements. He rejected the Israeli plan to complete 3,000 housing units in Jewish settlements in the West Bank, and to continue to construct public buildings and other construction in east Jerusalem - a territory Palestinians hope will be their future capital.

After Arab criticism of her comments in Jerusalem on the Israeli plan, Clinton delayed her return to Washington after attending an international conference in Marrakech, Morocco, and flew instead to Cairo.

Appearing at Clinton's press conference on Wednesday, Egyptian Foreign Minister Ahmed Aboul Gheit said the Mubarak-Clinton talks were "very fruitful and will have clear benefits and results in the future."

"The talks were frank and clear that showed a U.S.-Egyptian common understanding on several issues," he said.

In a new twist Tuesday, Clinton made what appeared to be an inadvertent slip of the tongue in a television interview with the al-Jazeera network, referring to the goal of "an Israeli capital in east Jerusalem."

It has not been U.S. policy to favor including east Jerusalem in an Israeli capital; the Palestinians claim it as their capital, and the issue is one of the most important and delicate points that would have to be settled in any final peace deal between the two parties.

In the al-Jazeera interview, Clinton reiterated that Obama has clearly stated his desire for a halt to settlements. But she added that the Israeli offer of "restraint," to include an end to establishment of new settlements and other measures that limit settlement growth, might be close enough to the ultimate U.S. and Palestinian goal to merit embracing in the near future.

"It is nowhere near enough, but I think when you keep your eye on what we want to achieve, it is a better place to be than the alternative, which is unrestrained (growth)," she said.