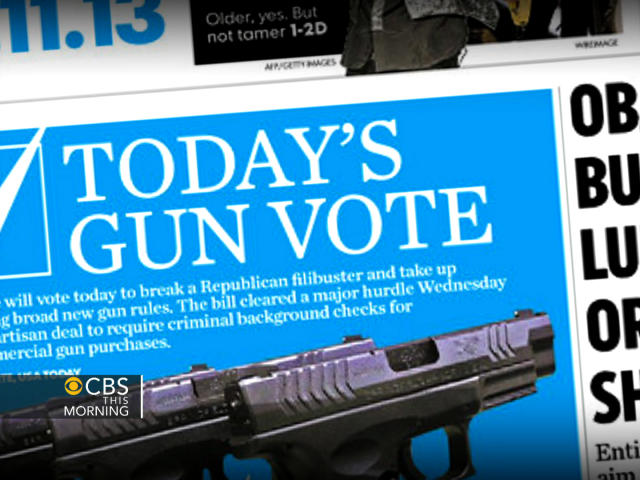 (CBS News) Congress prepares to debate new gun-control measures next week, four months after the massacre of 20 first grade students and six educators at Sandy Hook Elementary School in Newtown, Conn. Lobbyists fighting for more restrictive laws and parents of Newtown victims say the tragedy should move legislators to act, just as other instances of gun violence have pushed lawmakers and presidents to act throughout U.S. history.

"In the 1920s during prohibition, you had all of these people with submachine guns the gangsters started coming around," Brinkley said. FDR came into the Oval Office in 1933 and wanted to "start curbing" these guns by "levying heavy taxes on gun manufacturers to ban guns" -- such as so-called "Tommy" guns -- that could be used for purposes other than hunting.

In the wake of a series of assassinations -- of President John F. Kennedy, Robert Kennedy, and Martin Luther King Jr. -- Brinkley said "people wanted to do something," particularly about mail-order guns. JFK assassin Lee Harvey Oswald "had ordered his from an NRA American Rifleman magazine."

The push for new gun laws "both in 1934 and 1968 ... was trying to keep the criminals, felons, and mentally insane from having weapons," Brinkley said.

1972: The Bureau of Alcohol, Tobacco and Firearms was created as an enforcement body for the 1968 Gun Control Act

ATF was established as a division of the U.S. Treasury Department as part of what Brinkley calls Treasury's continued effort to "constantly" tax guns, "the idea being [that] a lot of fringe people won't be able to pay for guns if there's a very steep tax."

The name of the bill was related to the 1981 assassination attempt directed at then-President Ronald Reagan. While no one was killed in the shooting, Reagan's press secretary was wounded and left paralyzed by the attack.

2012-2013: The Obama administration continues to push for more restrictive gun-control laws, emphasizing background checks and a possible ban on high-capacity ammunition magazines, after several mass shootings throughout Mr. Obama's first and second term. In April , Congress is set to begin debate on changes to gun-control legislation.

The gun-related tragedies throughout Mr. Obama's tenure -- including the 2011 Tucson shooting, the 2012 shooting at an Aurora, Colo., movie theater, and the December shooting at Sandy Hook -- sparked a divisive national debate on how best to prevent gun violence.

Brinkley said based on Mr. Obama's State of the Union and inaugural addresses and current White House strategy, the president is "not going to let go of Newtown. He's decided that this is something he must accomplish on his watch."