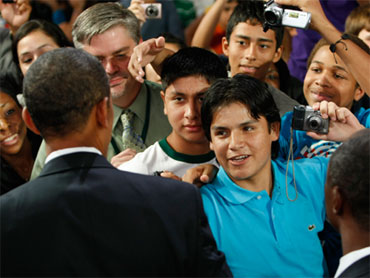 In the 1980s, the United States was the undisputed leader in having a college-educated work force. Now it is lagging behind other developed nations in the number of adults with college degrees.

The College Board has released a report showing the U.S. ranking 12th among 36 developed countries in the number of 25- to 34-year olds with college degrees. College and high school completion rankings have also dropped sharply.

"The growing education deficit is no less a threat to our nation's long-term well-being than the current fiscal crisis," Gaston Caperton, the president of the College Board, warned at a meeting on Capitol Hill of education leaders and policy makers, according to an article in The New York Times.

The report urged the Obama administration to work to "increase the proportion of 25- to 34-year-olds who hold an associate degree or higher to 55 percent by the year 2025 in order to make America the leader in educational attainment in the world."

• Improve teacher quality and focus on recruitment and retention.

According to the Times piece, William Kirwan, the chancellor of the University System of Maryland, who hosted the Washington discussion where the College Board report was released, said: "We led the world in the 1980s, but we didn't build from there. If you look at people 60 and over, about 39-40 percent have college degrees, and if you look at young people, too, about 39-40 percent have college degrees. Meanwhile, other countries have passed us by."

Canada is now the world's leader in educational attainment, with 56 percent of 25- to 34-year-olds having earned at least an associate's degree in 2007, compared with only 40 percent in the United States.

Low-income students and minorities are having an even harder time, with only 30 percent of African-American young adults and less than 20 percent of Latinos in the 25-34 age group having an associate's degree or higher.