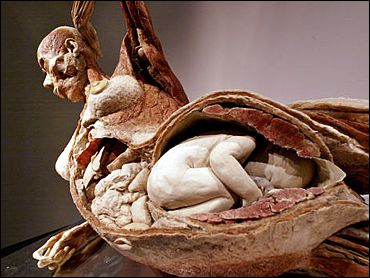 A pregnant woman lies on her side with a hand behind her head as if posing for a nude photograph. But her dead body isn't the only thing exposed. Her heart, intestines and 8-month-old fetus are visible as well.

The woman was one of more than 200 people who donated their cadavers for use in "Body Worlds: The Anatomical Exhibition of Real Human Bodies," which makes its U.S. debut Friday at the California Science Center.

Intended to teach people about human skeletal, cardiovascular and other systems, the final exhibit includes 25 bodies that have undergone a process called "plastination" in which body fluids are replaced with clear, pliable plastic.

Most have been skinned or dissected to reveal muscles, bones, nerves and organs. Some show damage done by illnesses such as cancer and lung disease.

Since debuting in Tokyo in 1996, the show has aroused controversy as well as curiosity. Its shocking display of flesh and bones has offended many observers who claim it violates the sanctity of the human body.

However, German scientist Gunther von Hagens, who created the exhibit and the preservation technique, defends his work as educational and enlightening.

"It's more than time that we show how the body really looks," he said.

In the past eight years, "Body Worlds" has toured Asia and Europe, attracting nearly 15 million visitors and a number of critics who have dubbed von Hagens "Dr. Death" and "Frankenstein" because of his work.

In Frankfurt, Germany, the Lutheran church said the display was amoral and insulting to the dead. At a London show, one visitor covered the body of the pregnant woman with a blanket because he couldn't stand seeing the fetus.

During exhibit stops, about 6,000 people signed papers donating their bodies to von Hagens' institute for possible plastination. Most hope to further medical science, he said.

Recent visitors to the California Science Center said they had mixed feelings about the coming exhibit.

Eva Edwards was fascinated until she discovered the exhibit featured real human bodies. She quickly saw a conflict between her religious and scientific beliefs.

"Religiously, we feel the body should be respected and buried," she said. "I don't really feel that scientifically."

The effect on her 9-year-old daughter was even more profound. The girl started crying when she realized the bodies in the preview pictures were real.

The body parts didn't bother 16-year-old Zahra Nankani, who was visiting the center as part of a youth conference on medicine.

"I think it's amazing to see real live body parts, and the vulnerability and intricacy of a human body," Nankani said. "Most people don't get to see this."

Visitors younger than 13 won't be permitted to see "Body Worlds" without a parent or guardian.

Jeffrey N. Rudolph, president of the California Science Center, said the exhibit underwent a rigorous review by religious leaders, medical professionals and bioethicists before it was brought to Los Angeles.

He said the panel knew it would make people uncomfortable but decided the educational value outweighed any possible controversy.

"It's not an ethical issue," Rudolph said. "It's more of a visceral reaction."

By Kristie A. Martinez

Neanderthals, humans may have longer mating history
Thanks for reading CBS NEWS.
Create your free account or log in
for more features.
View CBS News In
CBS News App Open
Chrome Safari Continue
Be the first to know
Get browser notifications for breaking news, live events, and exclusive reporting.