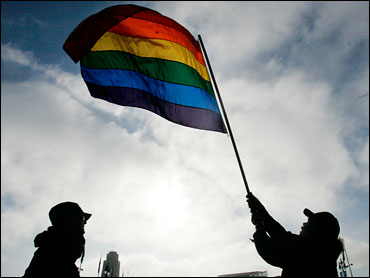 The Obama administration on Wednesday formally endorsed a U.N. declaration calling for the worldwide decriminalization of homosexuality, a measure that former President George W. Bush had refused to sign.

The move was the administration's latest in reversing Bush-era decisions that have been heavily criticized by human rights and other groups. The United States was the only western nation not to sign onto the declaration when it came up at the U.N. General Assembly in December.

"The United States supports the U.N.'s statement on human rights, sexual orientation and gender identity and is pleased to join the other 66 U.N. member states who have declared their support of the statement," said State Department spokesman Robert Wood.

"The United States is an outspoken defender of human rights and critic of human rights abuses around the world," Wood told reporters. "As such, we join with other supporters of this statement, and we will continue to remind countries of the importance of respecting the human rights of all people in all appropriate international fora."

The Associated Press reported on Tuesday that the administration would endorse the declaration.

Gay rights and other groups had criticized the Bush administration when it refused to sign the declaration when it was presented at the United Nations on Dec. 19. U.S. officials said then that the U.S. opposed discrimination on the basis of sexual orientation but that parts of the declaration raised legal questions that needed further review.

According to negotiators, the Bush team had concerns that those sections could commit the federal government on matters that fall under state jurisdiction. In some states, landlords and private employers are allowed to discriminate on the basis of sexual orientation; on the federal level, gays are not allowed to serve openly in the military.

But Wood said a "careful interagency review" by the Obama administration had concluded that "supporting this statement commits us to no legal obligations."

When it was voted on in December, 66 of the U.N.'s 192 member countries signed the nonbinding declaration, which backers called an historic step to push the General Assembly to deal more forthrightly with anti-gay discrimination. It was endorsed by all 27 European Union members as well as Japan, Australia and Mexico.

But 70 U.N. members outlaw homosexuality - and in several, homosexual acts can be punished by execution. More than 50 nations, including members of the Organization of the Islamic Conference, opposed the declaration.

Some Islamic countries said at the time that protecting sexual orientation could lead to "the social normalization and possibly the legalization of deplorable acts" such as pedophilia and incest. The declaration was also opposed by the Vatican.