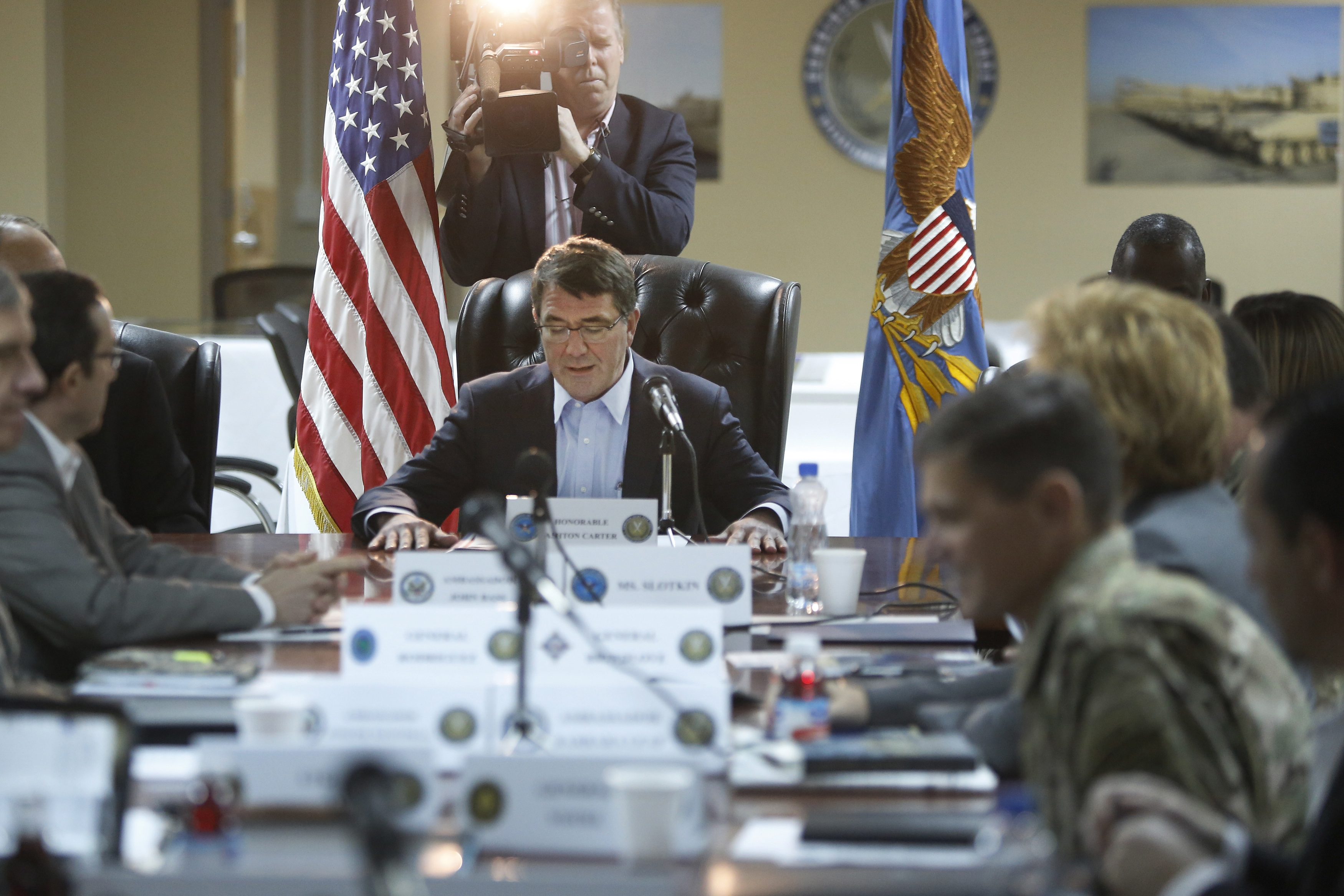 The Army general commanding the war effort in Iraq and Syria, meanwhile, told reporters that ISIS's fighters are "halted, on the defensive" in Iraq and facing a new counterattack by Iraqi forces in Anbar province to retake a town the militants seized earlier this month. Lt. Gen. James L. Terry said he is confident the Iraqi push, dubbed "Lion's Revenge," will succeed in retaking the town of al-Baghdadi.

While portraying the Iraqis as being on a path to success, Terry said ISIS, "No doubt, they're adaptive."

Carter said he assembled an array of U.S. generals, diplomats and intelligence officials not just to hear the latest on battlefield progress but also to better understanding of the intellectual underpinnings of President Obama's counter-ISIS strategy, including the ways military force is supposed to combine with political and economic measures to reverse the group's gains and eventually defeat it.

They were holding a six-hour closed-door session at this sprawling military base that hosts Terry's headquarters.

During a brief picture-taking session as the talks began, Carter said he needs a better understanding of the administration's approach to what he called the "very complicated" problem of an Islamic extremist group "spreading echoes and reflections around the world." He added, "It is a problem that has an important military dimension, but it's not a purely military problem -- it's a politico-military problem."

Seated around a large T-shaped table were about 25 senior officials, including Gen. Lloyd Austin, head of the military's Central Command; presidential envoys John Allen and Brett McGurk; the commanders of U.S. forces in Europe and Africa, and U.S. ambassadors summoned from Jordan, Kuwait, Saudi Arabia, Egypt and other Arab nations with a stake in the outcome of the fight against ISIS.

Carter called the group his "Team America." The gathering was a highly unusual way for a Pentagon chief to begin his tenure. Rather than go to Iraq and hear from U.S. officials there, Carter said he wanted a wider and deeper look at ISIS, in part because he is new in office. Aides said participants were told in advance to leave their usual talking points home and be prepared for a freewheeling discussion.

In remarks to troops at Camp Arifjan before the conference began, Carter said the key to success against ISIS is ensuring that the countries threatened by the group can preserve the gains achieved by the U.S.-led military campaign.

The meeting was convened against the backdrop of heavy Republican criticism of Mr. Obama's strategy for countering Islamic extremism and Carter's preparation for congressional testimony in early March.

It also coincides with the administration's request to Congress for a new authorization to use military force against ISIS, and comes on the heels of last week's White House summit on violent extremism.

Although Kuwait is next door to Iraq, Carter decided not to visit Baghdad on this trip, which is his first since taking office. He told reporters he needed to limit his time away from Washington at this early stage of his tenure and intends to make an Iraq visit sometime in the future. Carter spent Saturday and Sunday in Afghanistan.

In Kandahar, Afghanistan on Sunday, Carter told reporters that he believes the U.S. must rethink its approach to countering terrorism, partly in light of the emergence of ISIS, which is also known as ISIL.

"The reason to rethink the (counterterrorism) mission here in Afghanistan is first of all related to rethinking the ISIL phenomenon" and other ways in which terrorism in general has changed, he said. "That's different from the very early years when we came into Afghanistan ... because of an al Qaeda attack upon our country."

"The ways and means of terrorism changed over time and it makes sense to take account of that - that applies here, and it doesn't apply only here" in Afghanistan, he added. He did not discuss in detail the ways in which he thinks the U.S. should adapt its counterterrorism strategy.