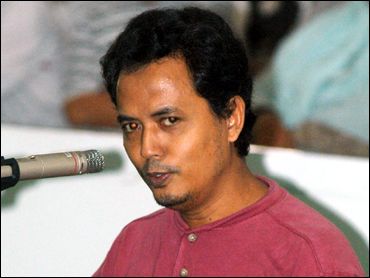 The alleged Singaporean head of the al Qaeda linked terror group Jemaah Islamiyah admitted Wednesday that the organization had planned to blow up a U.S. naval facility in the city-state.

Mas Selamat Kastari, a Singaporean citizen who was arrested in Indonesia in February, made the admission while giving testimony at the treason trial of the alleged spiritual head of Jemaah Islamiyah, Abu Bakar Bashir.

"The idea to destroy the base came from Hambali," said Kastari. "We just made plans but never implemented them," he said, referring to Jemaah Islamiyah's fugitive operations commander.

Jemaah Islamiyah is blamed for the Oct. 12, 2002 bombings on the resort island of Bali that killed 202 people, mostly Western tourists. It was the worst terror attack since Sept. 11, 2001.

Kastari did not say when the plan was hatched, but Singapore officials have said Jemaah Islamiyah operatives targeted U.S. ships in the city state in 2001.

Singapore's Changi Naval Base frequently hosts U.S. warships passing through to the Persian Gulf. The country is a close ally of the United States.

Kastari is currently on trial in Indonesia for immigration offenses. He will likely be deported to Singapore after his trial finishes.