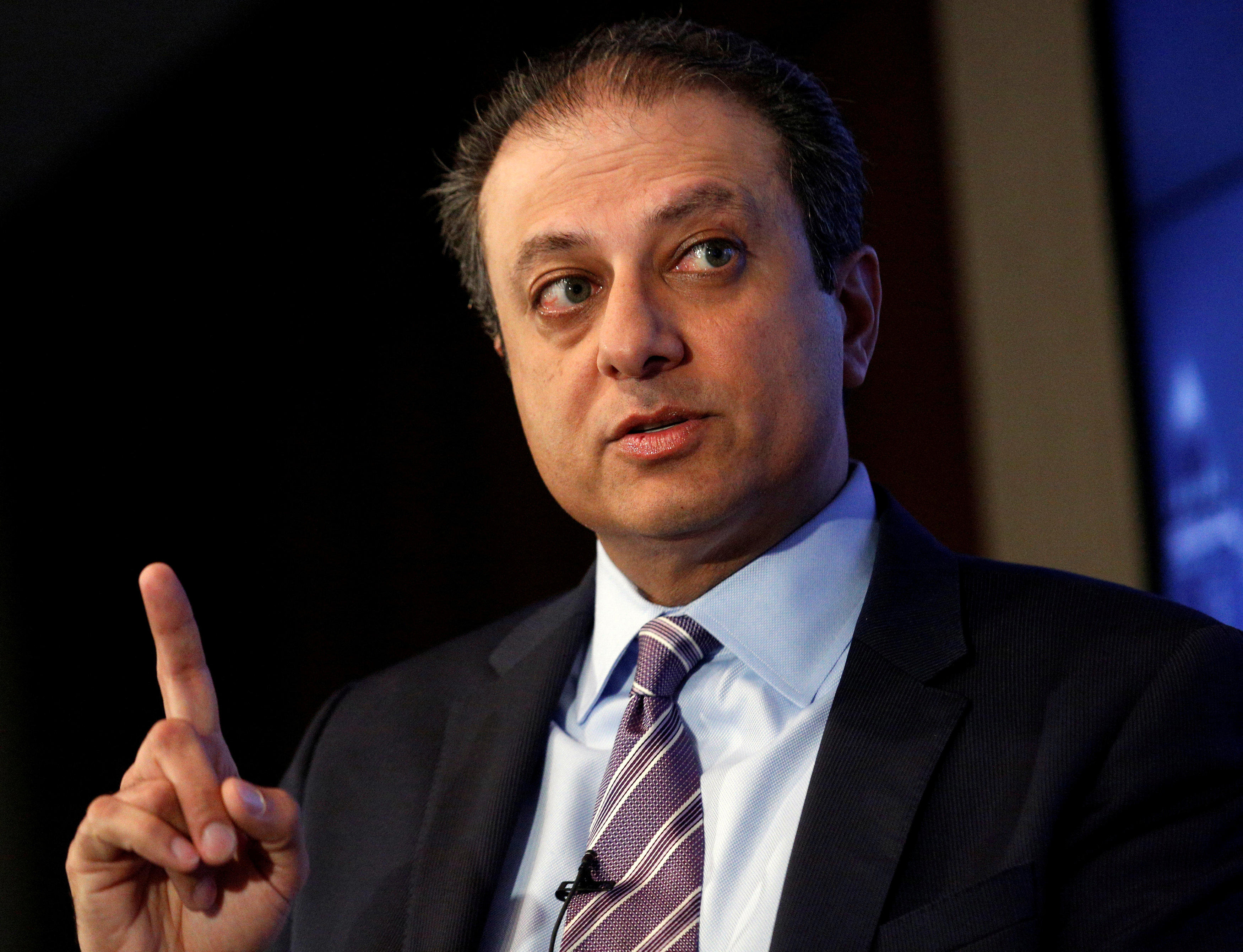 An outspoken Manhattan federal prosecutor known for crusading against public corruption said on Saturday that he was fired.

U.S. Attorney Preet Bharara made the announcement on Twitter amid reports that he wasn’t complying with Attorney General Jeff Sessions’ request on Friday to resign along with other prosecutors appointed by former President Obama.

“I did not resign,” Bharara said on Twitter. “Moments ago I was fired. Being the US Attorney in SDNY will forever be the greatest honor of my professional life.”

In a statement later, Bharara said: “Serving my country as U.S. Attorney here for the past seven years will forever be the greatest honor of my professional life, no matter what else I do or how long I live. One hallmark of justice is absolute independence, and that was my touchstone every day that I served.”

The Justice Department late Saturday confirmed Bharara was no longer U.S. attorney but declined to expound.

Bharara was not pleased when Acting Deputy Attorney General Dana Boente told him that Sessions’ request to resign applied to him, the official told Reid.

The request came months after Bharara, one of the most prominent federal prosecutors, said he’d been asked by President Trump to stay on and that he intended to.

The official said Bharara told Boente that he was going to say he was fired.

Sessions sought the resignations of 46 U.S. attorneys who were holdovers from the Obama administration.

Many of the federal prosecutors who were nominated by Mr. Obama had already left their positions, but the nearly four dozen who stayed on in the first weeks of the Trump administration had been asked to leave “in order to ensure a uniform transition,” Justice Department spokeswoman Sarah Isgur Flores said Friday.

“Until the new U.S. attorneys are confirmed, the dedicated career prosecutors in our U.S. attorney’s offices will continue the great work of the department in investigating, prosecuting and deterring the most violent offenders,” she said in a statement.

By Friday evening, U.S. attorneys around the country - including New Jersey, Rhode Island, Minnesota and Montana - had publicly announced their resignations.

It’s fairly customary for the 93 U.S. attorneys to leave their positions after a new president is in office, but the departures are not automatic and don’t necessarily happen all at once.

One U.S. attorney appointed by President George W. Bush, Rod Rosenstein of Maryland, remained on the job for the entire Obama administration and is the current nominee for deputy attorney general in the Trump administration.

A Justice Department spokesman, Peter Carr, said Mr. Trump has asked Rosenstein and Boente, who has served as U.S. attorney for the Eastern District of Virginia, to stay on.

The action was similar to one taken in 1993 by Attorney General Janet Reno, who soon after taking office in the Clinton administration sought the resignations of the U.S. attorneys appointed by President George H.W. Bush. At the time, Sessions was the U.S. attorney for the Southern District of Alabama.

Tim Purdon, a former U.S. attorney for North Dakota in the Obama administration, recalled that Mr. Obama permitted Bush appointees to remain on until their successors had been appointed and confirmed.

“The way the Obama administration handled it was appropriate and respectful and classy,” he said. “This saddens me because many of these people are great public servants and now they are being asked to leave.”

U.S. attorneys are federal prosecutors who are nominated by the president, generally upon the recommendation of a home-state senator, and are responsible for prosecuting federal crimes in the territories they oversee. They report to Justice Department leadership in Washington, and their priorities are expected to be in line with those of the attorney general.

Sessions took perhaps a veiled swipe at their work in a memo earlier this week, saying that prosecutions for violent crime have been on the decline even as the number of murders has gone up. The demand for resignations seems a way to ensure he will have a team of new federal prosecutors more likely to share his agenda.

Montana’s U.S. Attorney Mike Cotter said he received a phone call from Boente telling him “the president has directed this.”

“I think it’s very unprofessional and I’m very disappointed,” he said. “What happened today on Friday, March 10, that was so important that all Obama appointees who are US attorneys need to be gone?”

“I gotta write that (resignation) letter. It’s going to be a one-liner,” he added.