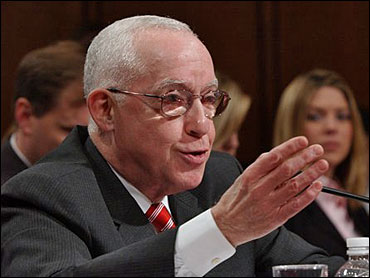 Attorney General Michael Mukasey named a prosecutor Monday to investigate whether Bush administration officials violated federal law in the firings of nine federal prosecutors. The scandal stripped the Justice Department of its leadership, damaged its credibility and sparked a historic showdown in court.

The decision to push ahead on a criminal inquiry follows the recommendation of an internal Justice Department investigation that harshly criticized Bush administration officials, members of Congress and their aides for the ousters, which many considered politically motivated.

Senators of both parties who led a congressional probe of the firing praised Mukasey's decision and cautioned President Bush against pardoning anyone involved in the scandal before as he leaves office in January.

"The American people will see any misuse of the pardon power or any grant of clemency or immunity to those from his administration involved in the U.S. attorney firing scandal as an admission of wrongdoing," said Judiciary Committee Chairman Patrick Leahy, D-Vt.

Nora Dannehy, a career prosecutor from Connecticut, was named by Mukasey to direct the probe into what role the White House played in the firings of the nine prosecutors and whether any crimes were committed during the ensuing congressional investigation.

Bringing in a career prosecutor was the lead recommendation of an internal Justice Department report released Monday, and Mukasey determined it should be someone from outside Washington.

The report unsparingly criticized Bush administration officials, Republican members of Congress and their aides for the ousters.

In it, Justice Department Inspector General Glenn Fine and Office of Professional Responsibility Director Marshall Jarrett described an almost total lack of involvement by Attorney General Alberto Gonzales and his deputy, Paul McNulty, in decisions to force out the nine federal prosecutors.

Monday's report, the result of a months' long investigation, was the latest to criticize Gonzales' management of the Justice Department during his 31 months as attorney general. Gonzales quit under fire in September 2007.

In a statement issued by his attorney, Gonzales said: "My family and I are glad to have the investigation of my conduct in this matter behind us and we look forward to moving on to new challenges."

Gonzales' attorney George Terwiller noted that the report found no unlawful conduct. "It seems rather odd," Terwilliger said, "that rather than bring the investigation to a close, the department would escalate the matter to the attention of a prosecutor."

U.S. attorneys are political appointees who serve at the pleasure of the president, but cannot be fired for improper reasons.

The report singled out the removal of U.S. Attorney David Iglesias of New Mexico - one of the nine - as the most troubling.

Republican political figures in New Mexico, including Sen. Pete Domenici and Rep. Heather Wilson, had complained about Iglesias' handling of voter fraud and public corruption cases, and that led to his firing, the report said.

Iglesias gave a subdued reaction to the Inspector General's report, which said that his firing was the most egregious example of political meddling, reports CBS News producer Stephanie Lambidakis.

"I support the findings of the Inspector General, I support the appointment of a prosecutor and I feel vindicated," Iglesias said. "My colleagues and I have always felt that there was White House involvement with Karl Rove and Harriet Miers for illegally removing the U.S. attorneys."

As for Mukasey asking for a 60-day status report from his newly-selected prosecutor, Iglesias says: "It's going to take a lot longer than 60-days. These are complicated cases. You're dealing with powerful people. I don't think there will be anything meaningful in 60-days."

Bud Cummins, a fired U.S. Attorney from Arkansas, spoke with CBS station KTHV in Little Rock. He said by phone that he is still a supporter of the administration, but adds that the White House owes an apology to 7 of the 9 fired US attorneys. He is not seeking an apology for himself, saying "life is too short to carry grudges."

"Everything (in the report) substantiates what I've said all along," Cummins told KTHV. "There was an absence of evidence about performance problems among the prosecutors. Those suggestions were pretext to cover-up and avoid explaining the firings."

"The Attorney General has some unique responsibilities, but he failed," Cummins said. "He's a nice fellow but he was in the wrong job."

Spokesmen for Domenici and Wilson did not respond to requests for comment. Both are leaving Congress at the end of the year.

Fine and Jarrett recommended a prosecutor because the White House and Justice's Office of Legal Counsel had not fully cooperated with their probe. "Serious allegations involving potential criminal conduct have not been fully investigated or resolved," they wrote.

Potential crimes described in their report include lying to investigators, obstruction of justice and wire fraud.

Investigators said they do not have the complete story of the firing of Iglesias, blaming it on the refusal of Domenici, former White House adviser Karl Rove, former White House counsel Harriet Miers, former Justice Department official Monica Goodling and other key witnesses still to be interviewed.

The president's refusal to let Rove, Miers and White House Chief of Staff Josh Bolten testify before Congress about the firings touched off a legal fight that is now before a federal appeals court. Most recently a judge ordered Miers to answer questions from the House Judiciary Committee about the firings.

Monday's report takes aim at Gonzales and McNulty, describing as "remarkable" their apparent ignorance of the reasons for the firing of prosecutor Daniel Bogden of Nevada.

Gonzales "bears primary responsibility" for the process of firing of the prosecutors and the turmoil that followed, the report said, adding that he "abdicated" his leadership role and was "remarkably unengaged."

The report concluded that Gonzales' chief of staff, Kyle Sampson, was the person most responsible for developing the plan to fire the prosecutors and said that Sampson's comments to Congress, the White House and others were misleading.

Sampson and others claimed at first that the prosecutors' poor performance inspired their firings. But the 358-page report found that Bud Cummins, the U.S. Attorney in Arkansas, was forced out to make way for Timothy Griffin, who had previously been Rove's deputy in the White House political office.

It also said the dismissal of Todd Graves, the U.S. Attorney for the Western District of Missouri, probably resulted from pressure from the office of Republican Sen. Christopher "Kit" Bond. Bond was upset that Graves did not intervene in a dispute between the staffs of Bond and Republican Rep. Sam Graves, the prosecutor's brother, the report said.

A spokeswoman for Bond did not immediately return a call for comment.

Similarly, Justice Department officials had legitimate concerns about the work of two other prosecutors who were fired, Margaret Chiara of Grand Rapids, Mich., and Kevin Ryan of San Francisco, the report said.