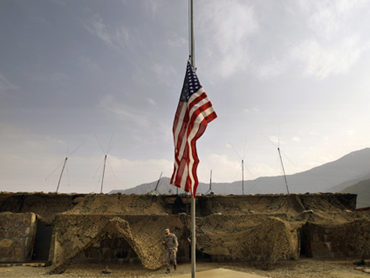 Morale has fallen among soldiers in Afghanistan, where U.S. troops are seeing record violence in the 8-year-old war, while those in Iraq show much improved mental health amid much lower violence, the Army said Friday.

Soldier suicides in Iraq did not increase for the first time since 2004, according to a new study.

Though findings of two new battlefield surveys are similar in several ways to the last ones taken in 2007, they come at a time of intense scrutiny on Afghanistan as President Barack Obama struggles to come up with a new war strategy and planned troop buildup.

There is also perhaps equal new attention focused on the mental health of the force since a shooting rampage at Fort Hood, Texas, last week in which an Army psychiatrist is charged.

Both surveys showed that soldiers on their third or fourth tours of duty had lower morale and more mental health problems than those with fewer deployments and an ever-increasing number of troops who are having problems with their marriages.

The new survey on Afghanistan found instances of depression, anxiety and other psychological problems are about the same as they were in 2007. But it also said there is a shortage of mental health workers to help soldiers who need it, partly because of the buildup Mr. Obama already started this year with the dispatch of more than 20,000 extra troops.

Efforts already under way to get more health workers to the Afghan war could be hampered somewhat by last week's shooting. The psychiatrist charged with 13 counts of premeditated murder was slated to go to Afghanistan. Some of the dead and wounded also were to deploy there to bolster psychological services for soldiers.

The new Afghanistan survey found that individual soldier morale was about the same as previous studies, but that "unit morale rates ... were significantly lower than in 2005 or 2007," said an executive summary of the report that was to be explained in a news conference Friday. The units referred to were mostly platoons of roughly a couple dozen people each.

In Iraq, some 2,400 soldiers in randomly selected platoons filled out surveys from December 2008 through March 2009 and a mental health assessment team went to the warfront for a month starting in late February to analyze the results and hold interviews and focus groups.

In Afghanistan, more than 1,500 troops in more than 50 platoons filled out the surveys from April to June, and the assessment team when through the same process from May through June.

Mental health providers also were interviewed in each country.

It is the sixth such survey, a program that was groundbreaking when started in 2003 in that it was the biggest effort ever made to measure the health of troops - and the services they receive - right at the warfront.
By Associated Press Writer Pauline Jelinek