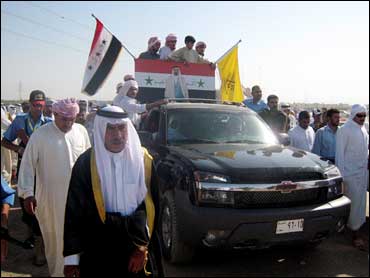 Mourners vowed revenge and perseverance Friday at the funeral of the leader of the Sunni Arab revolt against al Qaeda militants who was assassinated just 10 days after meeting with President Bush in Iraq's Anbar province.

Al Qaeda's front in Iraq claimed responsibility for the attack in a Web statement.

In eastern Diyala provice, meanwhile, a bomb exploded near a U.S. military vehicle on Friday, killing four American soldiers in, the U.S. command said. They were the first American deaths reported in Iraq since Monday.

More than 1,500 mourners marched along the highway near the home of Abdul-Sattar Abu Risha, who was killed along with two bodyguards and a driver Thursday by a bomb hidden near his house, just west of Ramadi.

Scores of Iraqi police and U.S. military vehicles lined the route to protect the procession as it followed the black SUV carrying the sheik's Iraqi-flag draped coffin.

"We will take our revenge," the mourners chanted along the six-mile route to Risha's family cemetery, many of them crying. "We will continue the march of Abu Risha."

Abu Risha was buried one year after the goateed, charismatic, chain-smoking young sheik organized 25 Sunni Arab clans under the umbrella of the Anbar Awakening Council, an alliance against al Qaeda in Iraq, to drive terrorists from sanctuaries where they had flourished after the U.S.-led invasion in 2003.

No group claimed responsibility for the assassination, but it was widely assumed to have been carried out by al Qaeda, which already had killed four of Abu Risha's brothers and six other relatives for working with the U.S. military.

U.S. officials credit Abu Risha and allied sheiks with a dramatic improvement in security in such Anbar flashpoints as Fallujah and Ramadi after years of American failure to subdue the extremists. U.S. officials now talk of using the Anbar model to organize tribal fighters elsewhere in Iraq.

Mr. Bush hailed Abu Risha's courage during his short Sept. 3 visit to al-Asad Air Base, and vowed in his nationally televised address Thursday night to help others carry on his work.

"Earlier today, one of the brave tribal sheiks who helped lead the revolt against al Qaeda was murdered," Mr. Bush said. "In response, a fellow Sunni leader declared: 'We are determined to strike back and continue our work.' And as they do, they can count on the continued support of the United States."

Many high-ranking officials were on hand for the funeral, including Iraq's interior and defense ministers and National Security Adviser Mouwaffak al-Rubaie.

"We condemn the killing of Abu Risha, but this will not deter us from helping the people of Anbar - we will support them more than before," al-Rubaie declared. "It is a national disaster and a great loss for the Iraqi people - Abu Risha was the only person to confront al Qaeda in Anbar."