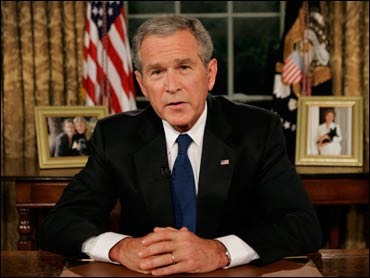 President Bush defended an unpopular war and ordered gradual reductions in U.S. forces in Iraq in a nationally televised speech from the Oval Office on Thursday night.

"The more successful we are," he said, "the more American troops can return home."

Still, Mr. Bush firmly rejected calls to end the war, saying the insurgents who threaten Iraq's future are a danger to U.S. national security. American troops must stay in the battle, Bush said, and more than 130,000 will remain after the newly ordered withdrawals are completed in July.

"The principle guiding my decisions on troop levels in Iraq is: return on success," the president said.

Mr. Bush said 5,700 U.S. forces would be home by Christmas and that four brigades - at least 21,500 troops - would return by July, along with an undetermined number of support forces. Now at its highest level of the war, the U.S. troop strength stands at 168,000.

With no dramatic change in course, the president's decision sets the stage for a fiery political debate in Congress and in the 2008 presidential campaign. Democrats said Mr. Bush's approach was unacceptable.

Sen. Jack Reed, a former Army Ranger who delivered the Democratic response to President Bush's speech, said that "once again, the president failed to provide either a plan to successfully end the war or a convincing rationale to continue it."

Reed said Democrats would work to "profoundly change our military involvement in Iraq."

Mr. Bush approved the recommendations of Gen. David Petraeus, the top U.S. commander in Iraq, to withdraw five combat brigades - at least 21,500 forces - and an undetermined number of support troops by July. The reductions represented only a slight hastening of the originally scheduled end of the troop increase announced in January.

Mr. Bush's speech was the latest turning point in a 4 1/2-year-old war marred by miscalculations, surprises and setbacks.

Almost since the fall of Baghdad, in April 2003, U.S. commanders and administration officials in Washington mistakenly believed they were on track to winding down U.S. involvement and handing off to the Iraqis. Instead, the insurgency intervened and the reality of a country in chaos conspired to deepen the U.S. commitment.

Mr. Bush said the U.S. engagement will stretch beyond his presidency, requiring military, financial and political support from Washington. He said Iraqi leaders "have asked for an enduring relationship with America. And we are ready to begin building that relationship in a way that protects our interests in the region and requires many fewer American troops."

Bush said his strategy - to leave about 130,000 U.S. soldiers in Iraq to continue fighting - bridges the desires of people who want to bring troops home and those who believe that success in Iraq is essential to U.S. security.

"The way forward I have described tonight makes it possible, for the first time in years, for people who have been on opposite sides of this difficult debate to come together," Bush said.

That appeared unlikely, however, based on the reaction of Democratic leaders who want deadlines for withdrawals.

"The American people long ago lost faith in the president's leadership of the war in Iraq because his rhetoric has never matched the reality on the ground," said House Speaker Nancy Pelosi, D-Calif. "The choice is between a Democratic plan for responsible redeployment and the president's plan for an endless war in Iraq."

Majority Democrats in Congress are unable to muster enough votes to force an end to the war. So they are hoping to win Republican support with legislation to limit the mission of U.S. forces to training Iraq's military and police, protecting U.S. assets and fighting terrorists.

"Democrats know that they do not at this point have the votes in the Senate to force the president to go faster," Schieffer told CBS Evening News anchor Katie Couric.

"Whatever political party you belong to, whatever your position on Iraq, we should be able to agree that America has a vital interest in preventing chaos and providing hope in the Middle East," the president said.

He added, "Let us come together on a policy of strength in the Middle East."

Mr. Bush acknowledged that Iraq's government has failed to meet goals for political reconciliation and security. A new assessment to be released Friday by the White House will underscore that point.

The latest conclusions largely track a comparable assessment in July, the White House said. The earlier report said the Iraqi government had made satisfactory gains toward eight benchmarks, unsatisfactory marks on eight and mixed results on the rest. A senior administration official said Thursday that only one of the benchmarks has moved from unsatisfactory to satisfactory: enacting and implementing legislation to allow former lower-ranking members of hanged President Saddam Hussein's Baath Party to hold government positions.

The official, who spoke on condition of anonymity because the report had not been made public, pointed to the tentative Aug. 26 power-sharing agreement among leading Iraqi politicians that outlined major terms on several issues, including changes in a law that prevented many former Baath Party members from holding government jobs and elected office.

"Yet Iraq's national leaders are getting some things done," Mr. Bush contended. He said the Baghdad government has passed a budget and is sharing oil revenues among the provinces even though legislation has not been approved. Changes that have begun to take hold in the provinces must be followed in Baghdad, he said.

Reporting what was shared at a preview before tonight's speech, hosted by the president and vice president at the White House on Thursday, Couric said President Bush described Nouri al-Maliki as being a "work in progress" and told reporters that the embattled Iraqi prime minister had stepped up to the place more recently, though his ability to reach across party lines is still suspect.

On Friday, Mr. Bush plans to reinforce his message in a visit to the Marine base in Quantico, Va., just outside Washington.

President Bush's claims of security progress were jarred by the assassination of a Sunni sheik who revolted against al Qaeda and fought alongside Americans.

Abdul-Sattar Abu Risha, the most prominent figure in a U.S.-backed revolt of Sunni sheiks against al Qaeda in Iraq, was killed Thursday by a bomb, dramatizing the danger faced by people who cooperate with coalition forces.

"This is a sheik who was one of the first to come forward to want to work with the United States to repel al Qaeda from al-Anbar Province," said White House spokeswoman Perino. "Remember, al Qaeda was killing some of the sheiks' children and put them in a cooler to deliver to the sheiks."

"This is the kind of enemy we're dealing with," she said.

Bush had met with the sheik 10 days ago during a visit to Anbar province. Bush said that after the sheik's death, a fellow Sunni leader pledged to continue working with the United States.

"And as they do," the president said, "they can count on the continued support of the United States."

He said Anbar, once considered lost to al Qaeda, shows what can happen across Iraq. "They show al Qaeda that it cannot count on popular support, even in a province its leaders once declared their home base."

Bush said he had directed Petraeus and Ryan Crocker, the U.S. ambassador to Iraq, to report to Congress in March with their next assessment of developments in Iraq and the level of U.S. troops needed to handle security.

"Americans want our country to be safe and our troops to begin coming home from Iraq," Bush said. He said his strategy would permit "people on opposite sides of this difficult debate to come together."

Polls show that Americans overwhelmingly disapprove of Bush's handling of the war, which has claimed the lives of more than 3,700 U.S. troops and cost about a half trillion dollars. His approval rating - both for his handling of Iraq and for his overall performance - stood at 33 percent in an Associated Press-Ipsos poll released Thursday.

In his speech, Bush directed specific messages to different audiences.

To Congress, he sought support for Petraeus' recommendations on troop levels.

To Iraqis, he said, "You must demand that your leaders make the tough choices needed to achieve reconciliation."

To Iraq's neighbors, he said efforts by Iran and Syria to undermine the government in Baghdad must end and that "the violent extremists who target Iraq are also targeting you."

To the international community, he appealed for help in revitalizing Iraq's economy and support for an expanded mission of the United Nations in Iraq.

To U.S. military personnel, intelligence officers, diplomats and civilians on the front line, he said, "You have done everything America has asked of you."