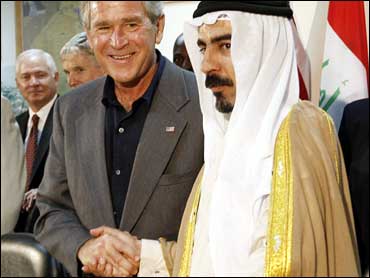 The most prominent figure in a revolt of Sunni sheiks against al Qaeda in Iraq was killed Thursday in an explosion near his home in Anbar province.

Abdul-Sattar Abu Risha was leader of the Anbar Salvation Council, also known as the Anbar Awakening - an alliance of clans backing the Iraqi government and U.S. forces.

CBS News chief foreign correspondent Lara Logan reports that when Abu Risha chose America to be his ally against al Qaeda, he became a marked man.

Motivated by the murder of his own family members, he took on al Qaeda in the most public way - using a TV commercial to recruit Sunnis for a police force in Anbar that until then, no one would join.

As the region's security improved, he flaunted his elevated status with everyone from Iraq's Prime Minister Nouri al-Maliki to GOP presidential hopeful John McCain.

And just 10 days ago, he publicly celebrated with President Bush - the relationship applauded as a model for defeating terrorism.

With the U.S. success in Anbar province showcased in Washington this week, it's hardly surprising that America's enemies would strike back. The question is what impact that will have on U.S. efforts to build similar relationships with the Sunni populations in other parts of Iraq.

Today in Ameriyah, Logan saw first-hand how the same model has turned one of Baghdad's most violent Sunni neighborhoods into a much more peaceful place. Fourteen soldiers were killed in Ameriyah during a recent one-month period. They've gone from that to not having a single attack in the last month, thanks largely to another influential Sunni Sheikh, Khaled al Obeidi - also from Anbar province.

Together they say they've driven al Qaeda from most of Ameriyah, much the same way Sheikh Sattar helped drive them Anbar. When news of today's assasination broke, Sheik al Obeidi said this would not stop him and blamed those working on behalf of Iran.

"They sabotage any project that unites Sunnis and makes them powerful," he said.

If the U.S. can't protect its new-found allies, they risk losing everything they've gained.

In Washington, meahile, Pentagon spokesman Bryan Whitman said U.S. forces provideed personal security for Abu Risha -- at one point even parking an M-1 tank outside his house. While U.S forces did train his security detail, Whitman said he currently was being protected by his own people.

A Ramadi police officer said Abu Risha had received a group of poor people at his home earlier in the day, as a gesture of charity marking the beginning of the Muslim holy month of Ramadan. The officer, speaking on condition of anonymity out of security concerns, said authorities believed the bomb was planted by one of the guests.

It was not the first time Abu Risha and his colleagues have been targeted.

In June, a suicide bomber blew himself up in the lobby of Baghdad's Mansour Hotel during a meeting of U.S.-linked Sunni tribal leaders, killing 13 people and wounding 27.

Among those killed was the former governor of Anbar and sheik of the al-Bu Nimir tribe, Fassal al-Guood - a key ally of Abu Risha. A day later, al Qaeda in Iraq claimed responsibility for the attack.