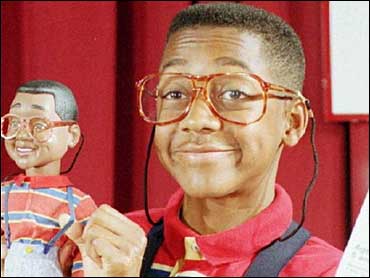 Monday night, VH-1 begins its weeklong tribute to the decade of O.J. Simpson, Bill Clinton, and Tickle-Me-Elmo. Much like its predecessors, which covered the '70s and '80s, "I Love the '90s" takes a year-by-year look at everything good and bad about the last decade of the 20th century.

To mark the new series, The Early Show is testing its anchors with a daily quiz. Monday's topic is '90s television.

Jaleel White, who played TV's ultimate nerd - Steve Urkel - for ten years on the hit sitcom "Family Matters" was the moderator along with co-anchor Harry Smith. The panelists were Rene Syler, Hannah Storm and Julie Chen.

TAKE THE QUIZ and see how well you do. Julie was by far the winner, getting 4 points. Hannah got 2 and Rene only 1.

Working on "Family Matters" was a wonderful experience for White, who started on the sitcom at the age of 12 and left at 21.

"I had my own cereal, my own doll," White says. "I can't shake any of that stuff. I can't get through airport security without somebody doing an impersonation of me."

And that is just fine with him. "What I love most is, I bring smiles to people's faces. Whenever I go, anyplace. You know, a lot of people are famous for the wrong reasons, and I get the biggest smiles out of everybody," he says.

Since "Family Matters" left the airwaves in 1998, White says he has been writing for television and film. After the show ended, he went to UCLA to study filmmaking and graduated in 2001.

"That's what I want to do. I want to create this programming," he says.

On Tuesday, tune in for a quiz on '90s scandals.