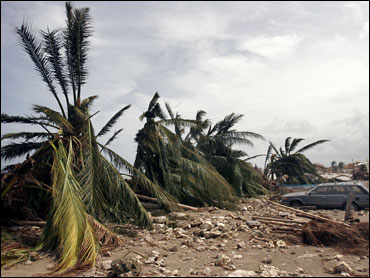 Hurricane Dean closed in on the Mexican mainland Wednesday, battering evacuated oil platforms on the Bay of Campeche and picking up some of the force it unleashed on the Yucatan Peninsula. The storm was upgraded from a Category 1 to Category 2 storm late Wednesday morning.

Dean swept across the Yucatan on Tuesday after making landfall as a ferocious Category 5 hurricane, toppling trees, power lines and houses — but sparing Glitzy resorts on the Mayan Riviera.

Driving rain, poor communications and impassable roads made it difficult to determine how isolated Mayan communities fared in the sparsely populated jungle where Dean made landfall after killing 13 people in the Caribbean.

Greatly weakened from that overland journey, Dean moved across the Bay of Campeche in the southern Gulf of Mexico, home to more than 100 oil platforms, three major oil exporting ports and the Cantarell oil field, Mexico's most productive.

In the past few days, more than 14,000 workers have been evacuated from the platforms, reports CBS News correspondent Bianca Solorzano.

The entire field's operations were shut down just ahead of the storm, reducing daily production by 2.7 million barrels of oil and 2.6 billion cubic feet of natural gas.

The sprawling, westward storm could strike just miles from a nuclear power plant, which has been shut down as a precaution, reports CBS News' Adrienne Bard.

At 11 a.m. EDT, Dean was a Category 2 hurricane with maximum sustained winds near 100 mph and was centered about 75 miles east-southeast of Tuxpan, the National Hurricane Center said. It was moving west-northwest at about 18 mph.

Torrential rains, battering waves and a storm surge of six to eight feet above normal were forecast, and some strengthening was possible over the warm waters of the Gulf before landfall.

But the center's hurricane specialist Daniel Brown said Dean was unlikely to have enough time to strengthen beyond a Category 1 or 2 hurricane before making landfall Wednesday afternoon. Outer bands of the storm system reached the mainland before dawn.

The last tourists departed Tuesday from the beaches of Tecolutla, a getaway on the western Gulf of Mexico where the storm is forecast to hit.

Zbigniew Szadkowski, 50, a physics professor from Lodz, Poland, said he wanted to see a hurricane in action but was leaving anyway with wife Anna, 51.

"I wanted to stay but my wife said no," he said.

Residents boarded up doors and windows on hotels facing the beach, and authorities issues stern warnings for the low-lying coast. "Now is not the time to be enjoying Tecolutla's beaches," town councilor Ricardo Pardinas said.

There were about 100 soldiers in the town who authorities said would be used for security or evacuation if needed. Javier Sanchez, the head of civil protection in Tecolutla, said residents were being encouraged to leave and a forced evacuation was not being ruled out. Schools were ordered closed across the Gulf coast state of Veracruz.

President Felipe Calderon said no deaths were immediately reported in Mexico, after Dean crossed the Caribbean and plowed into the Yucatan Peninsula on Tuesday.

Striking the Yucatan on Tuesday, Dean was the third most intense Atlantic hurricane to make landfall in recorded history.

With all its strength, Dean's path was fortunate, says Solorzano. The storm crossed one of the most sparsely populated areas of the coastline. Dean dumped huge amounts of rain, knocked out power and brought flooding. But for major tourist resorts, dean was just a windy rain storm.

"It wasn't minutes of terror. It was hours. I wish I was exaggerating, but I'm not," said Catharine Morales, 30, a native of Montreal, Canada, who has lived in Majahual for a year. "The walls felt like they were going to explode."

Morales weathered the storm in her new brick-walled house with her husband and 7-month-old daughter Luna. Dean blew out the windows and pulled pieces from their roof.

But they fared better than most: Hundreds of homes in the Caribbean town of Majahual collapsed as Dean crumpled steel girders, splintered wooden structures and washed away about half of the immense concrete dock that transformed the sleepy fishing village into Mexico's second-busiest cruise ship destination.

The storm surge covered almost the entire town in waist-deep sea water, said fishermen Jorge Gonzalez, 29. He found refuge in the back room of a flooded beachfront store, and had to help his dog Camilo keep his head above the rising tide.

"There came a moment when I thought this was the end," Gonzalez said.

Little was known about the thousands who rode out the storm in low-lying communities of stick huts.

But CBS News correspondent Manuel Gallegus reports it doesn't appear Dean will have much of an impact on the Lone Star State.

"At this point, Texas is on a stand-down. They've called off their emergency preparedness operations," Gallegus, on South Padre Island, said. "The Coast Guard, the National Guard, the school buses, the medical helicopters, the military aircraft, all on stand-down now."

The space shuttle Endeavour landed a day early Tuesday because of the threat NASA once feared Dean would pose to Mission Control in Houston.