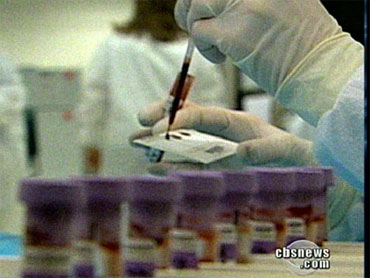 A government report released Tuesday found that essential DNA evidence in rape cases is often never sent to crime labs for testing. But what our investigation also found is that even when police departments do send rape kits to crime labs, they can go untested for months -- even years -- while rapists go free.

A 24-year-old single mother from Enid, Okla. (who we will call "Cathy") told police she was raped in July by Kory Mitchell.

"I tried to crawl away and when I got to the door, he pushed me back down," Cathy said.

"Cathy" knew Mitchell through her ex-boyfriend. What she didn't know was that Mitchell had been accused of rape over a year ago.

"I didn't know I couldn't trust him," she said.

Mitchell, who denies the charges, was not arrested for the first alleged rape because police were waiting for the lab results from the rape kit. It took 14 months for the results tying Mitchell to the crime to arrive. Finally, the results showed up on July 8, exactly one day after "Cathy" says Mitchell raped her. He has been charged with both rapes.

"I don't want him to do it to somebody else," Cathy said.

Now, a five-month CBS News investigation of 24 cities and states has found more than 6,000 rape kits from active investigations waiting months, even years to be tested.

On average, six months in Rhode Island, Alabama and Illinois. It can take nearly a year in Missouri. Up to three years in Anchorage, Alaska. One state, Louisiana, has rape kits dating as far back as 2001 waiting to be tested.

"It's absolutely astounding," said Sarah Tofte, Research Director at Human Rights Watch. "What's the point of sending a rape kit to a crime lab for testing if you can't get to it for say, eight years?"

"It worries me that this is not a high enough priority in some parts of the country in law enforcement," said Sen. Patrick Leahy.

Sen. Patrick Leahy says it wasn't supposed to be this way. In 2003, he co-sponsored federal legislation allocating three-quarters of a billion dollars to clear the rape kit backlog. But still delays remain.

"If they don't catch the person on this rape, they are going to commit another one," Leahy said.

That's what David Lisak found. An expert on rape at the University of Massachusetts, he says research shows that 71 percent of rapists are repeat offenders.

"The number of assaults that they commit can be anywhere from, in non-stranger cases, it's somewhere in the neighborhood of 3, 4, 5, 6 offenses at least per rapist," Lisak said.

Even with accused repeat offenders there are delays. Prosecutors had to wait 11 months for lab results before they could charge one man with three rapes in Missouri. And because of a backlog at the Louisiana crime lab, a sex offender was just charged with rape, from 2006. Both men deny the charges.

"We had a sense that there were perpetrators out there who were not being followed up on," said Steve Redding. He's a county attorney in Minneapolis, and started digging through old cases where the victim didn't know her attacker, and for one reason or another, the kits were never tested. He sent 35 kits to the lab. Patterns emerged. A case from 1998 matched DNA from a 2007 case.

"Do I think that the person has not committed any sexual assaults in between those nine years," Redding asked? "Not in my life as a prosecutor for 30 years.

In the end, Redding got DNA matches on eight of the 35 cases, charging all eight with rapes.

Further proof that justice can be found in these kits, if only they are tested, and tested in time.