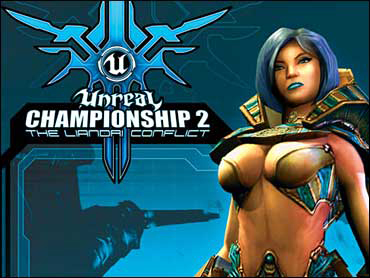 
"Bring A Knife To A Gunfight"

Sometimes, I like looking at the art for a game more than the screenshots. Why? Because it often seems like the artists who make the renders and draw their ideas decide to just do whatever they feel like.

This usually leads to lots of pictures of large weapons and entertainingly disproportionate characters. Case in point, the first image of this story.

The original Unreal Championship was, I thought, a bit lackluster, but the sequel looks promising. My worry lies in the balance between melee combat and long-range combat.

Recently, a lot of titles have started incorporating melee fighting into multiplayer and shooter gaming. I can't say if it's the popular rifle-butting that Halo included, or the Light saber dueling of Jedi Academy or even the simple "Oh Crap I'm Out Of Ammo I Have To Use My Fists" in Doom, but companies are starting to think that sticking a fat slogan along the lines of Now you can shoot people AND hit them with pointy things! on the box will boost sales.

Don't get me wrong, I love whacking people with my shotgun right before I put some buckshot in their tails, and I'm always glad to have more death-dealing options at my disposal, but it's got to be done correctly.

But hey, maybe I shouldn't be concerned. If Unreal Championship 2 can come somewhere close to the joys of Unreal Tournament I'll be a happy gamer.

Unreal Championship 2: The Liandri Conflictcontinues the Unreal franchise on the Xbox and introduces an evolutionary new gameplay style to the traditional FPS genre: acrobatic melee combat. This highly anticipated sequel also features new single-player and multiplayer gameplay, person camera mode and intense melee abilities. Unreal Championship fans can play as any one of 14 characters from the Unreal universe, each with spectacular new Adrenaline Powers that enable new offensive and defensive combos.