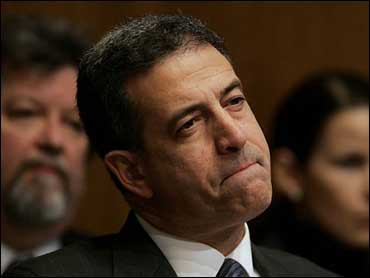 That would give President Barack Obama the power to strike individual items from budget bills.

The lawmakers from Janesville, Wis., joined Republican Sen. John McCain of Arizona on Wednesday to reintroduce the legislation.

The Supreme Court struck down previous line item veto legislation in 1998, and subsequent efforts to pass it did not gain traction.

Feingold, Ryan and McCain say their bill was tweaked to make it constitutional. They also say that a line item veto is an important way to cut wasteful spending as the country deals with a slumping economy and the president makes tough budget decisions.

Feingold is one of a few Senate Democrats voicing opposition to a pending $410 billion catchall spending bill, unhappy with its cost and changes to U.S. policy toward Cuba.

Most importantly, Democrats Evan Bayh and Feingold announced Wednesday that they are voting against the bill, and each urged President Barack Obama to veto it if it passes later this week.

The White House has signaled that Mr. Obama will sign the bill - even though it contains almost 8,000 pet projects sought by lawmakers - calling the measure last year's business.

"The omnibus debate is not merely a battle over last year's unfinished business, but the first indication of how we will shape our fiscal future," Bayh wrote in an opinion column in Wednesday's Wall Street Journal.

"I'm going to vote against it," Feingold said. "The president should veto it."

The measure contains budget increases, on average, of 8 percent for the domestic agencies it covers, far more than they received under the Bush administration. But moderate Democrats are unhappy with the additional spending, especially after many agencies received huge infusions of money under the just-enacted economic recovery bill.

"It's become increasingly clear that most of our Democrat colleagues here in Congress - Senator Bayh notwithstanding - are perfectly comfortable with the breathtaking rate of spending we've been on since the beginning of the year," said Senate Minority Leader Mitch McConnell, az Republican. "They want it to continue, without restraint and without any end in sight."

At the same time, Democratic Sens. Robert Menendez and Bill Nelson are weighing whether to oppose the legislation over a provision buried in it that would moderate rules on travel to Cuba and would make it easier for Cuba to pay for imports of food and medicine.

It is not clear whether the pockets of opposition are enough to sink the measure, which would fund 12 Cabinet departments and other agencies for the ongoing budget year. Democratic leaders hope to clear the bill - which passed the House last week - to meet a Friday deadline.

That is when a stopgap funding law that keeps the government going, mostly at 2008 levels, runs out.

Senate Majority Leader Harry Reid, a Democrat, is also trying to keep the bill free of floor amendments that would force the measure into negotiations with the House that would delay enactment.