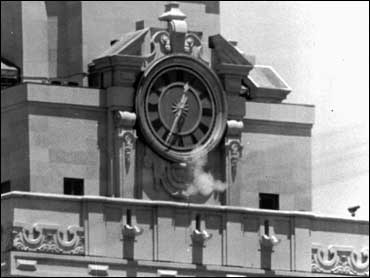 Last August, with little fanfare, the University of Texas marked the 40th anniversary of what then was the nation's worst mass shooting.

Until Monday's carnage at Virginia Tech, the Aug. 1, 1966, sniping rampage by Charles Whitman from the Austin school's landmark 307-foot tower had remained the deadliest campus shooting in U.S. history.

Whitman, 25, a Lake Worth, Fla., native and former university student, opened fire from the 28th-floor observation deck, shooting people on the streets 231 feet below.

Sixteen people were killed and another 31 were wounded before police killed him about 90 minutes later.

In 2001, a Fort Worth man died of what physicians said were complications from a gunshot wound inflicted that day by Whitman, bringing the death toll to 17.

The school marked the tragic anniversary last year with a low-key observance, flying flags on campus at half-staff.

Then this past January, university officials added a bronze plaque to a garden near the tower as a memorial "to those who died, to those who were wounded, and to the countless other victims who were immeasurably affected by the tragedy," according to an inscription on the plaque.

Among Whitman's victims was a receptionist near the top of the tower who was fatally beaten and two tourists from Texarkana were shot to death.

Besides his murderous attack from the top of the tower, Whitman earlier had stabbed to death his mother at her Austin apartment and his wife at their Austin home.

Notes that Whitman left behind indicated he killed his wife and mother to spare them the embarrassment of what he planned to do.