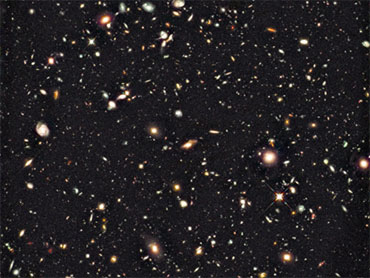 The night sky may be a lot starrier than was thought.

The study questions a key assumption that astronomers often use: that most galaxies have the same properties as our Milky Way. And that is creating a bit of a dispute among astronomers who want a more orderly cosmos.

It is one of two studies being published online Wednesday in the journal Nature that focus on red dwarf stars, the most common stars in the universe. The study that offers the new estimate on stars is led by a Yale University astronomer. He calculates that there are far more red dwarfs than previously thought, and that inflates the total star count.

A second study led by a Harvard University scientist focuses on a distant "super Earth" planet and sees clues to the content of its atmosphere — the first of this kind of data for this size planet. It orbits a red dwarf.

Red dwarf stars — about a fifth the size of our sun — burn slowly and last much longer than the bigger, brighter stars, such as the sun in the center of our solar system, said Yale astronomer Pieter van Dokkum. His study looks at how many red dwarfs are in elliptical-shaped galaxies.

When scientists had estimated previously how many stars there were in the universe, they assumed that all galaxies had the same ratio of dwarf stars as in our galaxy, which is spiral-shaped. Much of our understanding of the universe is based on observations inside our Milky Way and then extrapolated to other galaxies.

But about one-third of the galaxies in the universe are not spiral, but elliptical, and van Dokkum found they aren't really made up the same way as ours.

Using the Keck telescope in the state of Hawaii, van Dokkum and a colleague gazed into eight other distant, but elliptical, galaxies and looked at their hard-to-differentiate light signatures. The scientists calculated that elliptical galaxies have more of those dwarf stars. A lot more.

"We're seeing 10 or 20 times more stars than we expected," van Dokkum said. By his calculations, that triples the number of estimated stars from 100 sextillion to 300 sextillion.

For the past month, astronomers have been buzzing about van Dokkum's findings, and many aren't too happy about it, said astronomer Richard Ellis of the California Institute of Technology.

Van Dokkum's paper challenges the assumption of "a more orderly universe" and gives credence to "the idea that the universe is more complicated than we think," Ellis said. "It's a little alarmist."

Ellis said it is too early to tell if van Dokkum is right or wrong, but it is shaking up the field "like a cat among pigeons."

Ellis said the new study does make sense. Its biggest weakness might be its assumption that the chemical composition of dwarf stars is the same in elliptical galaxies as in the Milky Way. That might be wrong, Ellis said. Even if it is, it would mean there are only five times more red dwarf stars in elliptical galaxies than scientists previously thought, instead of 10 or 20, van Dokkum said.

Slightly closer to home, at least in our own galaxy, one dwarf star has astronomers at Harvard University taking another step in their search for life. They were able to home in on the atmosphere of a planet circling that star using the European Southern Observatory's Very Large Telescope in Chile. The planet lives up to the word alien.

Their paper reports that this giant planet's atmosphere is either dense with sizzling water vapor like a souped-up steam bath, or it's full of hazy, choking hydrogen and helium clouds with a slightly blue tint. The latter is more likely, say the researchers and others not involved in the study.

While scientists have been able to figure out the atmosphere of gas giants the size of Jupiter or bigger, this is a first for the type of planet called a super Earth — something with a mass 2 to 10 times Earth's. It is more comparable to Neptune and circles a star about 42 light years from Earth. A light year is nearly 6 trillion miles.

And while this planet is nowhere near livable — it is about 440 degrees — characterizing its atmosphere is a big step toward understanding potentially habitable planets outside our solar system, said study chief author Jacob Bean at the Harvard Smithsonian Center for Astrophysics.

"You wouldn't want to be there. It would be unpleasant," said study co-author Eliza Kempton of the University of California Santa Cruz.

Bean and Kempton looked at the light spectrum signature from the large planet as it passed in front of the dwarf star, and the result led to two possible conclusions: steam bath or haze.

The steam bath is the more interesting possibility because water is key to life, said outside scientist Alan Boss of the Carnegie Institution of Washington.

But an upcoming and still unpublished study by Kempton and Bryce Croll at the University of Toronto points more toward a hydrogen-helium atmosphere, several astronomers said.