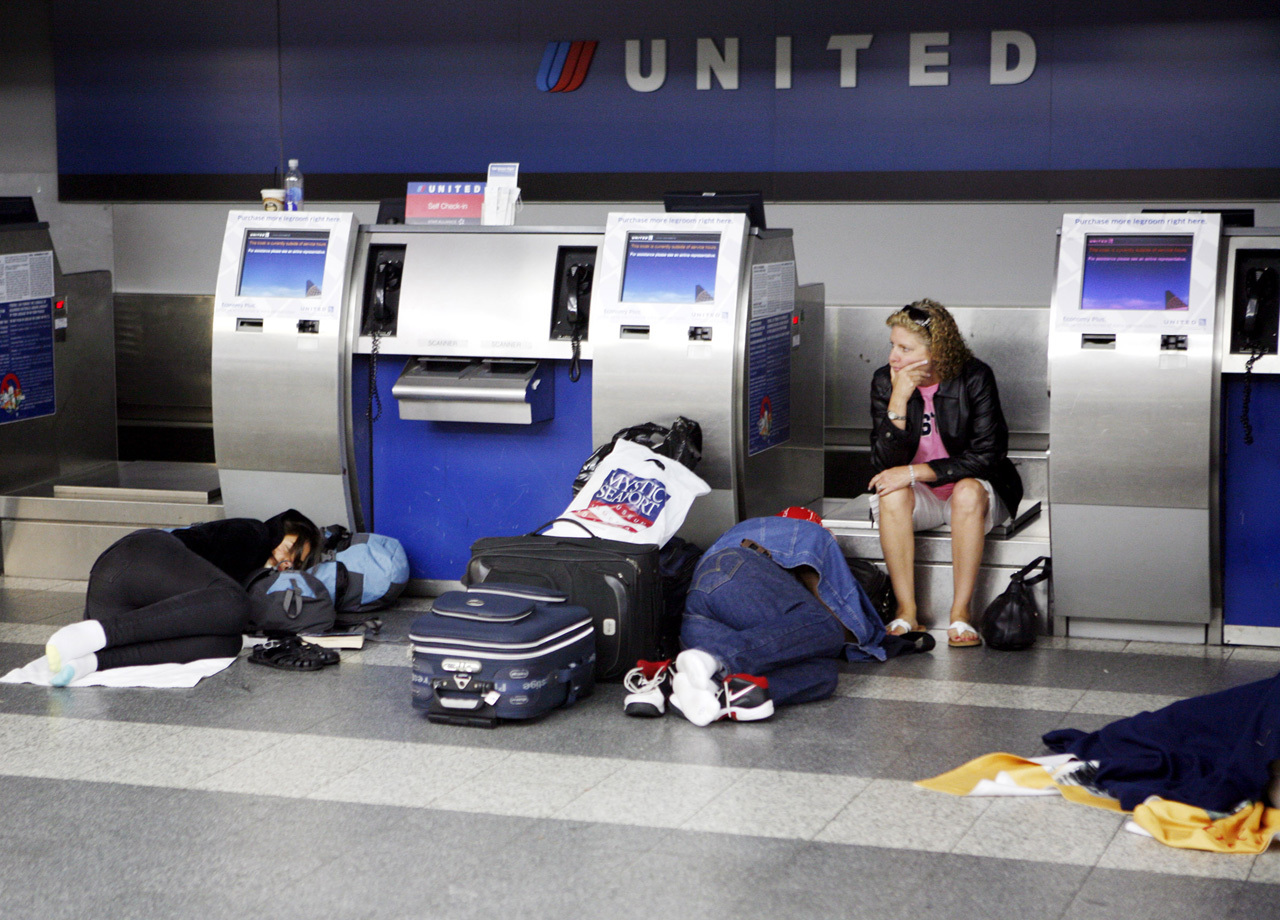 The slowdown of United Airlines flights owing to a computer outage that led to the cancellation of flights across the country - and the stranding of thousands of travelers - appears to be dissipating.

It could take several days for thousands of stranded travelers to get home after the airline's computer system shut down for several hours Friday. The unspecified "network connectivity" problem was fixed and flights resumed early Saturday, but delays could persist throughout the weekend.

United will waive all change fees and penalties for those whose flights were affected, reports CBS News correspondent Dave Browde.

But with flights nearly full, there was little room for passengers whose flights had been cancelled to rebook.

"There's literally nowhere to put them," airline analyst Robert Mann said. "There are already very few empty seats on the flights that operate."

In May United's planes were on average 86.8 percent full.

The outage started about 7:15 p.m. CDT Friday and lasted for about five hours. Long lines of passengers formed at airports in San Francisco, Los Angeles, Denver and Chicago. Some passengers ended up spending the night at airports or found hotel rooms in the cities where they were stranded.

United said its flight departures, airport processing and reservation system, including its website, were affected by the outage.

United didn't say how many passengers or flights were affected. But Los Angeles International Airport spokeswoman Nancy Castles said the outage affected about 2,500 people at that airport alone.

Nina and Mark Whitford of Brockville, Ontario, ended up in Chicago while on a layover on their flight home from Minneapolis. They said they were headed to a hotel to spend the night and were dismayed when an airline worker told them they would have to mail in their hotel receipt to get reimbursed.

"We've been waiting here for about two hours for our baggage, and nothing's come," said Nina Whitford, 35.

She said several people were still at the airport around 1 a.m. CDT Saturday, and others on their flight had rented cars to complete their trip to Canada.

Ron Schaffer, an Apple Inc. engineer, was trying to connect with a flight to Grand Junction, Colo., after flying into Denver from Orlando, Fla.

"A hundred yards of kiosks, and every one of them closed," he said, adding there were no flights listed on monitors. "Workers were trying to answer questions. They have no ability to do anything manually. They can't check baggage. You can't get baggage. You are really stuck."

Some Continental Airlines passengers also were affected by the outage.

United and Continental merged in May 2010. They still operate as separate airlines but are slowly integrating systems. United spokesman Charles Hobart said Saturday morning that Continental was able to dispatch flights normally, but some of its airport kiosks were affected. He would not comment on the total number of cancelations or passengers affected, saying the airline was still updating its information.

Airlines today place greater reliance on computers than a decade ago. Most passengers are now asked to check-in online, at airport kiosks or via their mobile phones. When the system crashes, the problems are just that much greater.

"They're infrequent, but the fact that they happen at all is puzzling. These are mission critical," Mann said. "The idea that they would fail is troubling."

While the airlines have sleek, modern check-in kiosks at the airports, the underlying reservation system behind them dates back to the 1980s, Mann said. Many airlines that went through bankruptcies in the past decade, including United, didn't invest in new systems.

When the system fails, flight plans and dispatch operations must all be done on paper.

"There are fewer and fewer people at airlines who are familiar with or able to operate with a manual system," Mann said.

Still, some people took the delays in stride.

Steve Cole, 51, of Bloxwich, England, was at the San Francisco airport waiting for a flight to Las Vegas.

"These are the things you have to expect when you're on holiday." Cole said. "I'm missing a night of gambling," he added with a grin.