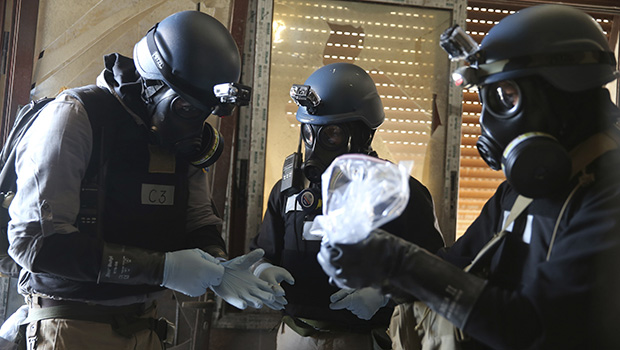 WASHINGTON -- Syrian government forces may have used poison gas in an attack on a rebel-held town just outside Damascus this week. U.S. officials say that video evidence posted by Syrian opposition groups showing victims, some wearing breathing masks and others with tubes siphoning blood from their lungs, appears to be credible.

The State Department said it is still gathering information about the assault in Moadamiya and "chemical weapons use" that is reported to have killed an estimated four to 10 civilians and injured around 30. It also noted that, over the past two months, the Assad regime has "intensified" its bombing campaign of Moadamiya at the same time that the U.S. and Russia have been negotiating the terms of a future ceasefire.

"If these allegations are confirmed, this would be the latest example of the Assad regime's atrocities against the Syrian people, and particularly against the residents of Moadamiya," a State Department official said.

The site of the reported attack is the very same suburb that was hit in a brutal chemical weapons assault in 2013 that killed hundreds and nearly led President Obama to authorize U.S. airstrikes against regime targets. Instead, the U.S. and Russia brokered a deal to destroy the regime's declared chemical weapons stockpiles. The Obama administration hailed the deal as a diplomatic success, though privately American officials acknowledged that not all chemical weapons were removed from the country. In addition, the regime has continued to use high concentrations of other toxic chemicals like chlorine gas dropped in barrel bombs to suffocate civilians.

"We continue to work with the international community, including Russia, to investigate and stop the use of chemicals as weapons in Syria," a State Department official said Wednesday in response to the graphic online videos of apparent victims of a chemical attack posted earlier this week.

Striking this rebel-held area was particularly bold given the announcement last Friday of a UN-sanctioned, U.S.-Russian brokered roadmap for a political transition in Syria. The Obama administration still plans to pursue that diplomatic process, and while U.S. officials say that Bashar al-Assad has lost legitimacy, there is no timeline for his departure.‎