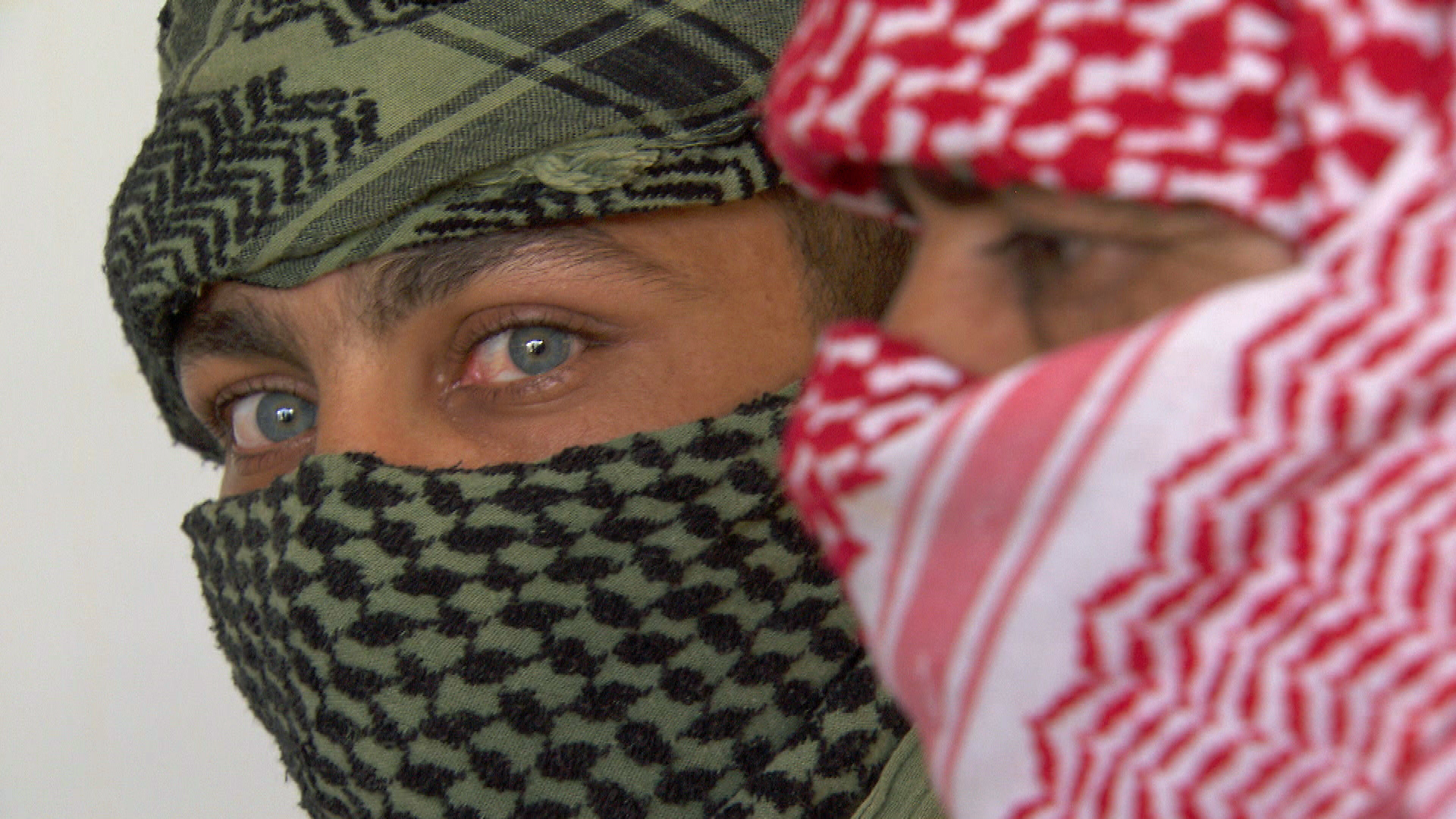 The following script is from "A Crime Against Humanity" which aired on April 19, 2015. Scott Pelley is the correspondent. Nicole Young and Katie Kerbstat, producers.

If you have young children watching right now, usually that's a good thing, but this story is not for them. The pictures you are about to see are agonizing. This will be hard to watch, but it should be seen.

Generally, mankind does not outlaw weapons. Anything a military can think of is in the arsenals of the world. But there are a few exceptions and one of them is for a weapon so hideous that virtually every country has banned, not only its use, but the mere possession of it. The weapon is sarin. It's nerve gas. And in 2013, it was unleashed on Syrian civilians in what the U.N.'s secretary general calls, "a crime against humanity." A year and a half later no one has been held responsible. For several months we have been gathering evidence. Much of what you are about to see has not been public before. None of what we found will be omitted here.

"Nobody knew what was going on. People were just praying for God to have mercy on them. Sir, I've seen things you won't even dream about in your worst nightmares."

About two in the morning, August 21st, 2013, hundreds in the suburbs of Damascus were awakened by the panic of their last breath stuck in their throats. Neighbors carried neighbors to makeshift clinics.

Victims were stripped and washed. Everything was tried but nothing could be done. There was no forcing life into lungs that could not accept it. Their nerves, electrified by sarin, fired non-stop. Muscles seized until death released them.

Kassem Eid: Nobody knew what was going on. People were just praying for God to have mercy on them. Sir, I've seen things you won't even dream about in your worst nightmares.

[Kassem Eid: I'm on a tour inside the streets of Moadamiyah.]

Kassem Eid has recorded his nightmares in Moadamiyah. Four years ago, the suburb rebelled against the dictatorship of Bashar al-Assad. Eid has shown the world the shelling and years of hunger imposed by an army blockade.

He was there in August when strange rockets pummeled the night.

Kassem Eid: And when they crashed, they didn't make the same old fashioned bombing sound. But it was, in a way, silent.

Scott Pelley: The rockets hit the ground but it didn't sound to you like they were exploding.

Kassem Eid: Yes. They were-- didn't sound like it was-- they were exploding. With the closest rocket hit almost 100 meters away from the place that I was staying in.

Kassem Eid: Yes. And within seconds, it just took seconds before I lost my ability to breathe. I felt like my chest was set on fire. My eyes were burning like hell. I wasn't able even to scream or to do anything. So I started to beat my chest really hard.

Kassem Eid: Yes. Trying to take a breath. Just to be able to take a single breath. It was so painful. It felt like somebody was tearing up my chest with a knife made of fire.

Over the years, artillery had sheared the tops off of the neighborhoods, so women and children slept in basements. Sarin, is heavier than air, it slipped past doors and crept down stairwells. Death was arbitrary. It seemed, for every corpse, there was a witness who just missed a lethal dose. A neighbor appeared at Kassem Eid's door.

"I cannot imagine how anybody can do this to people, to other people. Dying this way is one of the most ugliest ways of death people ever knew through history."

Kassem Eid: And she had two of her kids-- suffocating and vomiting this weird white stuff out of their mouths. She was begging us to help her, to get her children to the field hospital. This-- field hospital-- is just a basement in a building with almost zero medical equipments.

Scott Pelley: It's not a real hospital.

Kassem Eid: It's not a real hospital.

Kassem Eid: It felt like judgment day for me.

Sarin has no color, no odor. Often the dead drop never knowing what happened. But their eyes bear witness. The seizures draw the pupils tight. And the world goes dark--which might be a blessing.

This father had willed his daughters through months of hunger. Now he's shouting, "Do you know what they said before going to sleep? I gave her food. She said, 'Dad it's not my turn to eat, it's my sister's...,'" he goes on, "What should we do good people? What are we to do? Look at that face, look at that face."

Scott Pelley: You were being exterminated.

Kassem Eid: I know. I cannot imagine how anybody can do this to people, to other people. Dying this way is one of the most ugliest ways of death people ever knew through history.

The history of sarin begins in the 1930s. It was a Nazi weapons program. The name is an acronym of the scientists' last names. In 1997, sarin, and other chemical weapons were outlawed. And, the world set up the Organisation for the Prohibition of Chemical Weapons. Scott Cairns is a chemist and lead inspector for that organization.

Scott Pelley: A person who is exposed to sarin, what do they experience?

Scott Cairns: A number of physical symptoms and some psychological effects. You get this overwhelming sense of doom and hopelessness and fear.

Scott Pelley: And what causes death?

Scott Cairns: Typically, it's the paralysis of the respiratory system eventually. Your muscles don't work. You lose the oxygen to your brain. It just puts you into overload. It's a very horrible way to die.

As fate would have it, Scott Cairns would see evidence of that for himself. He was in Damascus with a team the day of the assault. They'd arrived days before to investigate other alleged chemical attacks.

Scott Cairns: I'd just gotten up and what I thought I'd heard was another regular bombardment of conventional weapons to the east of Damascus.

He had heard the rockets in route to the largest sarin massacre of civilians since Saddam Hussein in Iraq in 1988. Cairns demanded access. They raced in, in U.N. trucks and the shooting started.

Scott Cairns: The gunman was firing on the first two vehicles.

Scott Pelley: So, the vehicles were hit?

Scott Cairns: Oh, the vehicles were hit. The first vehicle was disabled.

Scott Pelley: Did you find out who was shooting at you?

Scott Pelley: Why do you think they were shooting at you?

Scott Cairns: They were shooting at us just to tell us, send us a message. If they wanted to kill us, they would've killed us. At no point was there any interest in the turning around and going back to the hotel.

Scott Pelley: Finding and documenting the truth was worth risking your life for.

Scott Pelley: How'd you go about your work?

Scott Cairns: Very quickly. We didn't have a lot of time. We had places where we could set up our interview stations. We could take samples. Biomedical samples from people. Blood, urine, hair.

They also collected cellphone videos and swabbed samples from mangled rockets. Days later, in a community called Zamalka, they discovered the rockets were much larger and had delivered even more gas. Never before had investigators arrived at a chemical crime scene so soon.

Scott Cairns: Well over 90 percent of the samples that we took tested positive for Sarin.

Scott Pelley: What witness sticks in your mind as the person you cannot forget?

Scott Cairns: There are several. A child of seven or eight who lost most of his family. A woman of-- in her early 30s who lost her entire family. Her husband and all her kids. A man that out of his 20 family members, he was the only one left alive. So interviewing these people was very difficult.

Our work to find witnesses took us out into the desert. The refugees we found were on the run from the regime of Bashar al-Assad.

Millions of Syrians have fled the country into desolate refugee camps like this one and over a period of weeks we have been able to find more survivors of the nerve gas attack. These people asked us to not show you their faces or tell you their names because they have family back in Syria and they are quite certain the dictatorship would hunt them down. Even at that, they told us some risks have to be taken to tell this story.

What he did could not be done by any other human being. He killed everything, even the trees."

He and his son, who is a nurse, told us that they were among those who had given first aid.

Scott Pelley: How many patients did you treat that day?

He told us, "People were being brought in on ambulances, motorcycles, pickup trucks, a tractor, and a semi. There were people rushing in their kids, crying out, 'Help him, help him, he's about to die.' I didn't have a chance to count."

This woman was three months pregnant with her son when the gas entered her lungs. She "came to" in an aid station. Her brother was carried in next.

"He was calling my name before he died," she said. "'Take care of your mother,' he told me."

Scott Pelley: How did you survive?

Woman: I lived by God's will. But I wished I had died.

Her son was born six months later. She believes he has epilepsy.

Woman: He loses consciousness; he starts shaking; his mouth foams. The same symptoms I had.

Scott Pelley: How often does he have these seizures?

She told us, "approximately three a day."

The rockets were types used by the Syrian army, and they were launched from land held by the dictatorship. U.S. intelligence believes the Syrian army used sarin in frustration after years of shelling and hunger failed to break the rebels.

With the threat of airstrikes, President Obama forced Assad to give up his chemical arsenal. But if Assad was the triggerman there is one thing odd about the timing.

Scott Cairns: I ask myself that a lot. I don't know.

Scott Pelley: We don't know why.

Scott Cairns: No. I don't think we'll ever truly know.

We also don't know, precisely, how many died but have a look around the makeshift morgues -- so many were lost, all at once, that the living had to make room for the dead.

U.S. intelligence estimates 1,429 civilians were killed; 426 of them, children. Of course, Syria is dying too. Prosecution of this atrocity will have to wait for whatever civilization emerges from the ruin. But the dead will be waiting because a crime buried without justice is never laid to rest.

A new model of architecture