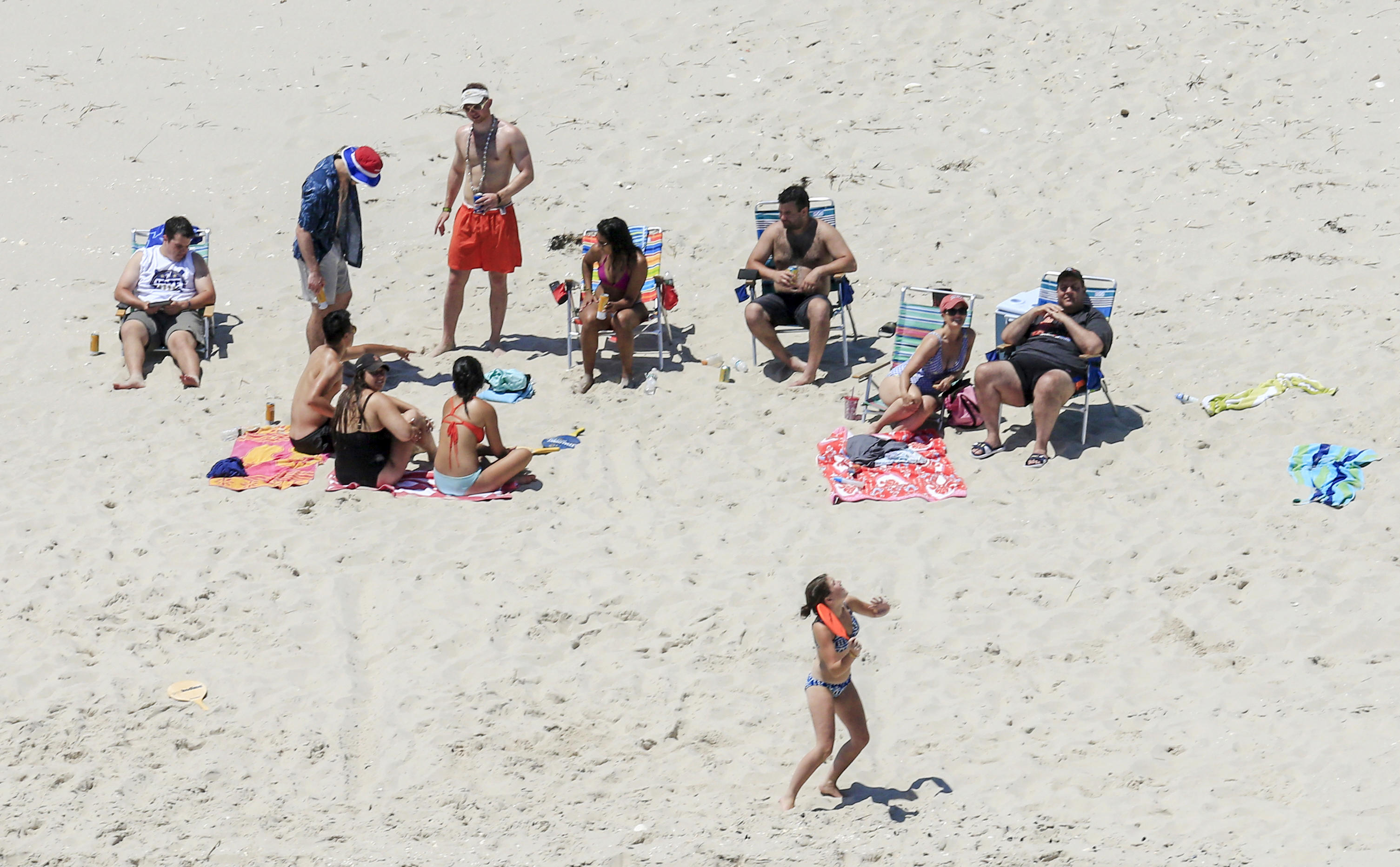 In one of them, New Jersey, a new layer of controversy emerged Sunday.

Of 46 states that had to pass a budget by Saturday, nine failed.

Illinois was entering its third straight year without a budget. Partial shutdowns in Maine and New Jersey were in their third day Monday, just a day before the Fourth of July.

New Jersey's shutdown saw Gov. Chris Christie spending part of Sunday lounging with his family on a beach at a state park he had ordered closed to the public amid a government shutdown that showed little sign of ending.

Christie closed state parks and beaches after lawmakers failed to pass a more than $34-billion budget.

The unpopular Republican governor, whose family was using the state residence at Island Beach State Park for the weekend, said later Sunday at a news conference in Trenton that he flew on a state helicopter to the residence.

The governor was photographed by NJ.com sitting with his family on a beach chair in sandals and a T-shirt before flying to talk to reporters in Trenton, where he worked without success to end the shutdown.

Liberty State Park was closed, forcing the suspension of ticket sales and ferry service from the site to the Statue of Liberty and Ellis Island. But the latter two sites remained open.

Across the state, police turned away visitors like Jennifer Bate, who came for a bike ride at Liberty State Park, CBS News correspondent Don Dahler reports.

"It's a holiday weekend," Bate said. "What about all the kids that have birthday parties and paid to rent to have a barbecue here? It's not fair."

During the news conference, Christie was asked if he had gotten any sun that day, to which he said he hadn't, NJ.com reported. The governor's spokesman agreed that Christie didn't get any sun; he said Christie was wearing a baseball hat.

On Saturday, Christie defended his use of the state property during the shutdown that affected the public, which is being kept out of state parks with signs blaming Democratic Assembly Speaker Vincent Prieto. Christie said, "That's the way it goes. Run for governor, and you can have the residence."

Christie said Sunday he's "frustrated" by the shutdown and is open to making a deal to reopen government.

Few lawmakers were around the statehouse Sunday, and Christie said that unless he sent state police to retrieve them he could not force them to be there.

Christie, for at least the second time, referred to himself as "Mr. Reasonable" and said he would consider the Democratic budget along with legislation to overhaul the state's biggest health insurer, Horizon Blue Cross Blue Shield. Without the Horizon legislation he has called for, he said he would line item veto about $350 million of the Democratic priorities.

"It should end today. Send me a budget," he said. "I'm ready to work, but I can't work if I don't have any money. These guys have to get their act together."

Also on Sunday, Democratic Senate President Steve Sweeney, who's allied with Christie, called for a meeting with lawmakers and Horizon's CEO to try to hash out a way forward.

Christie also ordered the Legislature to return Monday for a special session after ordering it to do so Saturday and Sunday.

Democrats are splintered over the impasse, with Prieto opposed to the plan and Sweeney in favor.

The term-limited governor blames the shutdown on Prieto, who continues to hold open a vote on the Assembly floor on the $34.7 billion budget that remains deadlocked with 27 yes votes, shy of the 41 needed to succeed. Democrats who are abstaining say they worry about Christie line item vetoing education funding from the budget.

Christie ordered the shutdown of nonessential state services, like parks and motor vehicle offices, on Friday after he and lawmakers failed to agree on terms.

Christie had demanded that lawmakers pass Senate-approved legislation to make over Horizon Blue Cross Blue Shield, but on Sunday said he'd reopen the government under either scenario.

Over the weekend, the public began feeling the effects of the shutdown.

Among those affected were Cub Scouts forced to leave a state park campsite and people trying to obtain or renew documents from the state Motor Vehicle Commission.

Remaining open under the shutdown are New Jersey Transit, state prisons, the state police, state hospitals and treatment centers as well as casinos, race tracks and the lottery.