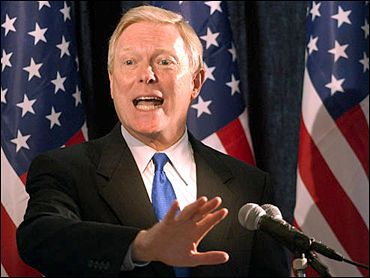 In a letter to Gephardt, D-Mo., Andrew Stern and Gerald McEntee accused Joyce Aboussie of promising to seek the reversal of an executive order that granted those employees collective bargaining rights. The union officials urged Gephardt to fire the St. Louis-based Aboussie from the campaign and issue a written retraction of her threats.

Gephardt's campaign said in a statement the congressman strongly supports collective bargaining for public employees. He had no comment on the accusations.

Aboussie, a longtime aide to Gephardt, said she was not authorized by Gephardt or the campaign to discuss the unions' endorsements with anyone in Missouri.

"In a candid discussion of Missouri politics, I expressed my belief that people in Missouri Democratic politics were upset by the SEIU/AFSCME endorsements of Howard Dean," she said in a statement Wednesday. "If anyone felt threatened by what I said, I apologize."

Gephardt is counting on a solid victory in Missouri in the Feb. 3 Democratic presidential primary. Although Gephardt did not receive the endorsements of the SEIU and AFSCME, he has consistently carried labor's fight during his 27 years in the House and has the backing of more than 20 international unions.

The unions' decisions to back Dean were considered a blow to the Gephardt campaign, which is counting on a big push from organized labor to deliver crucial victories in Midwestern states, starting with Iowa.

Dean and Gephardt have gone back-and-forth with narrow leads in Iowa, considered a must-win for Gephardt. The contest between the two men there has grown increasingly tense, with Dean faulting Gephardt for voting to approve the Iraq war and the congressman claiming the former governor has not staunchly defended Medicare.

Holden, who has close ties to Gephardt and Aboussie, granted collective bargaining rights to thousands of state workers in an executive order two years ago.

In their letter, Stern and McEntee said Aboussie warned them that if they worked for Dean in Missouri, she would prod at least 22 state legislators to write Republican leaders calling for repeal of the collective bargaining order. Republican state legislative leaders have tried and failed to challenge Holden's order in the courts and in the legislature.

"It's bad enough to deliver an ultimatum to any group of people," the AFSCME and SEIU presidents wrote. "But for a senior aide of yours — who has worked for you for more than 20 years — to do so at the expense of Missouri's state employees is deplorable."

The two unions are collective bargaining's staunchest backers in Missouri.

However, another Missouri labor leader defended the Gephardt campaign, saying SEIU and AFSCME were motivated by presidential politics.

"This isn't tiddlywinks; it's politics, and everybody's committed to doing what they need to do," said Bob Kelley, president of the greater St. Louis Labor Council, AFL-CIO.

"The bottom line is, it's politics, pure and simple," said Kelley, a longtime Gephardt backer. "And I have to tell you, I will take Joyce's influence on Missouri politics over either AFSCME or SEIU."

Holden, who supports Gephardt, said in a statement, "It is my hope that all my friends who believe in the rights of workers can resolve their differences."