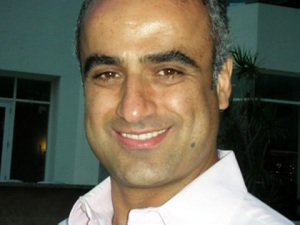 Aksal, a 48-year-old from North Bergen, was seated next to a woman he didn't know  who fell asleep during the flight, according to prosecutors. When she woke up, Aksal allegedly had one hand in her shorts and another in her shirt. Aksal was breathing heavily and whispered to the victim, "kiss me," according to the FBI complaint.

Alarmed, the woman slammed the armrest down and told Aksal to get off of her, prosecutors said, according to CBS New York. She then told a member of the flight crew what happened. The passenger sitting on the other side of Aksal corroborated the victim's story, the station reported.

Aksal was isolated on the plane after the alleged incident and arrested as soon as the flight landed. According to the complaint, Aksal admitted to groping the woman during an interview with law enforcement officers but claimed that it was consensual.

CBS New York reported Aksal has been ordered held without bail as a possible flight risk. If convicted of the sexual abuse charge, Aksal could face life in prison and a $250,000 fine.