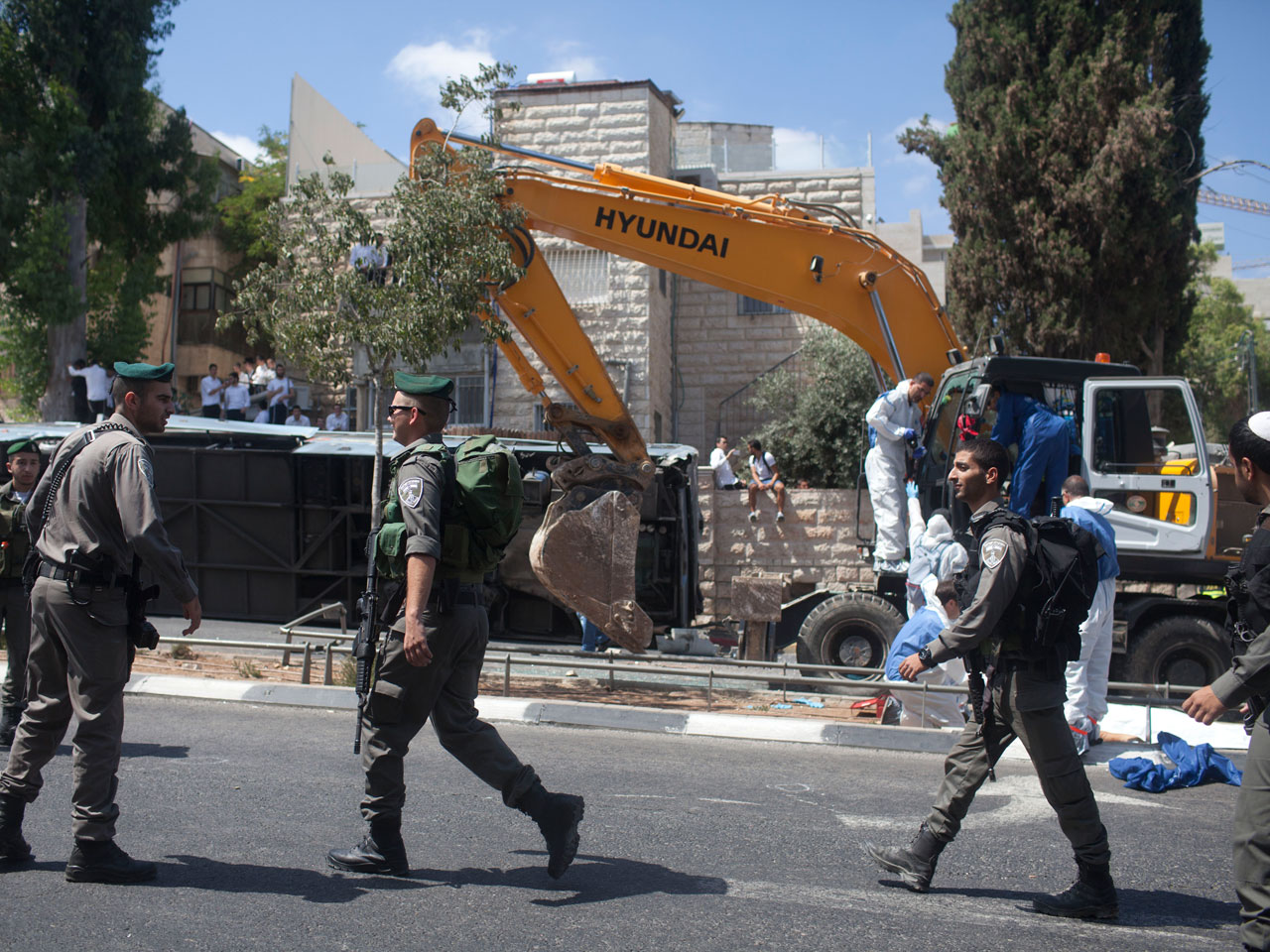 GAZA CITY, Gaza Strip - An Israeli-declared temporary cease-fire and troop withdrawals slowed violence in the Gaza war Monday, though an attack on an Israeli bus that killed one person in Jerusalem underscored the tensions still simmering in the region.

Several cease-fires have broken down during the nearly monthlong war - including Friday when an internationally negotiated truce collapsed amid violence and mutual recrimination between Israel and Hamas.

But with Hamas rocket fire tapering off over the last 24 hours and Israel's ground operation in Gaza winding down, violence in a war that officials say has killed more than 1,880 Palestinians and more than 60 Israelis appeared - for the moment - to be waning.

The lull was broken by the Jerusalem assault, which saw a man ram the front end of a construction excavator into an Israeli bus. Police described the incident as a "terrorist attack," indicating Palestinian involvement.

The attack occurred on a main thoroughfare near Jerusalem's light-rail line. The area is located near the unofficial line between Jewish West Jerusalem and east Jerusalem, the section of the city captured by Israel in 1967 and which is home to most of the city's Arab population. Israeli media said the attacker came from an Arab area of the city.

Israel's Channel 10 TV showed cellphone video of what it said was the attack, with the yellow excavator slamming its large shovel into the bus. Police spokesman Micky Rosenfeld said a police officer in the area opened fire and killed the attacker. A pedestrian also was killed, said Jerusalem district police chief Yossi Piranti.

In the past, Palestinian attackers have gone on deadly rampages with bulldozers in Jerusalem traffic.

"Because of the quick reaction of the police an even graver incident was avoided," Piranti said.

Shortly after the excavator attack, Israeli media reported that a gunman on a motorcycle shot and seriously wounded an Israeli soldier. Police searched for the shooter in east Jerusalem.

"We believe there is a great likelihood this was a terrorist attack," Piranti said.

Before the attacks, a seven-hour Israeli cease-fire in Gaza went into effect. And while Israel continued hitting at selected Palestinian targets, the level of the fighting was much lower than in previous days.

However, the Israeli military said the cease-fire would not apply to areas where troops were still operating and where they would respond to any attack.

Fifty feet below the tanks and a field of potatoes, Israeli forces discovered a tunnel cutting a direct course to a nearby kibbutz. It's more than two miles long, stretching from Gaza almost a mile into Israel.

Israeli Army Captain Daniel Elbo gave D'Agata a tour of what his government calls the "terror tunnels," and he said the militants thought of everything.

Outside the tunnels, the southern strip town of Rafah, which saw heavy fighting Sunday, was excluded from the truce, the military said.

Shortly after the cease-fire started at 10 a.m. (0700 GMT), an Israeli strike hit a house at the Shati refugee camp in the northern Gaza Strip, killing three people and wounding at least 30, Gaza health official Ashraf al-Kidra said. The Israeli military said it targeted an "operative threat" and rocket fire in the strike "around 10 a.m."

"We do not trust such a calm and call on our people to take caution," Zuhri said.

Meanwhile, the British Foreign Office said it was "urgently investigating" claims that a British aid worker had been killed in the Gaza town of Rafah. It declined to comment further.

Israel launched the military operation in Gaza on July 8 in response to weeks of heavy rocket fire. It has since carried out more than 4,600 airstrikes across the crowded seaside area. On July 17, it sent in ground forces in what it said was a mission to destroy the tunnels used by Hamas to carry out attacks inside Israel.

Hamas has fired more than 3,200 rockets into Israel during the war, with some intercepted by Israel's Iron Dome defense system and many of the crude missiles landing in open areas away from cities.

Since the war began, Palestinian health officials say at least 1,888 Palestinians have been killed. Most of the Palestinian casualties have been civilians, while all but three of the 64 Israelis killed have been in the military. Israeli Prime Minister Benjamin Netanyahu has come under increasing international pressure to halt the fighting because of the heavy civilian death toll in Gaza.

The Gaza police said Israeli navy boats also approached the northern coast of the strip and soldiers tried to land in the area. On the ground, there were clashes in the southern town of Rafah and southeast of Gaza City, they said. The Israeli military had no immediate comment.