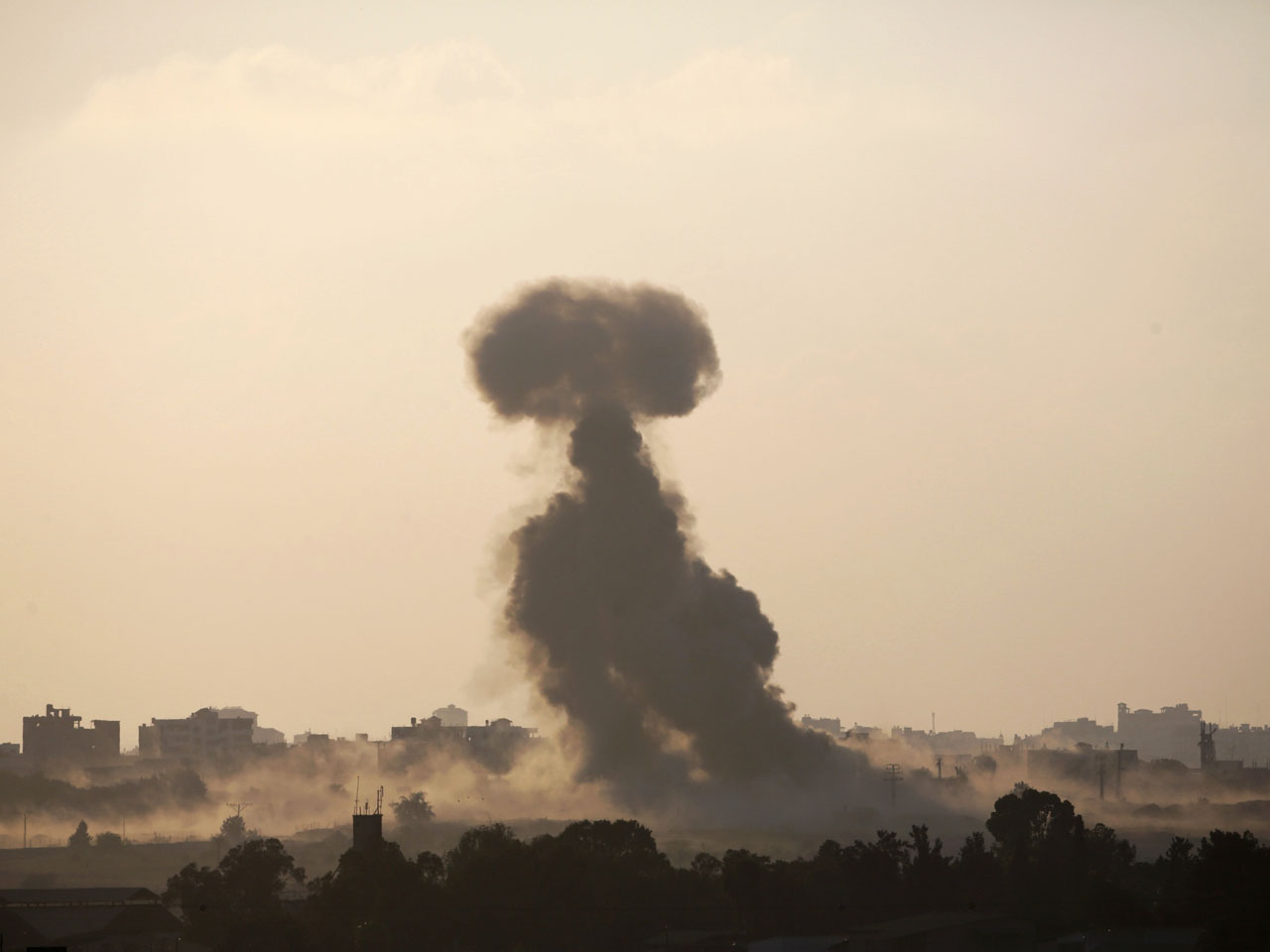 GAZA CITY, Gaza Strip -- An Israeli airstrike killed a militant leader in the Gaza Strip on Monday, just hours ahead of an expected seven-hour truce announced by Israel that was meant to open a "humanitarian window" for aid.

However, the Israeli military said the cease-fire, which was to start at 10 a.m. local time (3 a.m. EDT) would not apply to areas where troops were still operating and where they would respond to any attacks.

The Islamic Jihad group - a close ally of Gaza's militant Palestinian Hamas rulers - said its commander in the northern part of the strip, Daniel Mansour, died when the Israeli strike hit his home just before dawn Monday.

Israel has been drawing down its ground operation since the weekend but has kept up its aerial, offshore and artillery bombardments of the strip. The Gaza war, now in its fourth week, has left more than 1,800 Palestinians and more than 60 Israelis dead.

Hamas spokesman Sami Abu Zuhri said the group was skeptical about the Israeli truce announcement. "We do not trust such a calm and call on our people to take caution," Zuhri said.

Israel launched its military operation in Gaza on July 8 in response to weeks of heavy rocket fire, carrying out hundreds of airstrikes across the crowded seaside territory. It then sent in ground forces on July 17 in what it said was a mission to destroy the tunnels used by Hamas to carry out attacks inside Israel.

Since the fighting erupted, Hamas has fired more than 3,000 rockets into Israel, many of them intercepted by Israel's Iron Dome defense system.

U.N. officials say more than three-quarters of the dead in the war have been civilians, including 10 people killed Sunday at a U.N. school that has been converted into a shelter in the southern Gaza Strip town of Rafah.

U.N. Secretary-General Ban Ki-moon called the attack a "moral outrage and a criminal act" and demanded a quick investigation, while the U.S. State Department condemned the strike in unusually strong language. The U.S. said it was "appalled" by the "disgraceful" attack.

According to witnesses, Israeli strikes hit just outside the main gates of the school on Sunday. The Red Crescent, a charity, said the attack occurred while people were in line to get food from aid workers. Gaza health official Ashraf al-Kidra said in addition to the dead, 35 people were wounded.

Robert Turner, director of operations for the U.N. Palestinian refugee agency in Gaza, said the building had been providing shelter for some 3,000 people. He said the strike killed at least one U.N. staffer.

"The locations of all these installations have been passed to the Israeli military multiple times," Turner said. "They know where these shelters are. How this continues to happen, I have no idea."

The Israeli military said it had targeted three wanted militants on a motorcycle in the vicinity and was "reviewing the consequences of this strike."

Lt. Col. Peter Lerner, an Israeli military spokesman, confirmed the bulk of ground troops had been pulled out of Gaza after the military concluded it had destroyed most of the tunnel network.

He said Israel had detected some 30 tunnels that were dug along the border for what he called a "synchronized attack" on Israel.

"We've caused substantial damage to this network to an extent where we've basically taken this huge threat and made it minimal," he said. The army had thousands of troops in Gaza at the height of the operation.

In southern Israel, armored vehicles could be seen rolling slowly onto the back of large flatbed trucks near the Gaza border, while soldiers folded flags from atop a tank and rolled up their belongings and sleeping bags.

Lerner said, however, that the operation was not over and that Israel would continue to target Hamas' rocket-firing capabilities and its ability to infiltrate Israel.

While Israeli Prime Minister Benjamin Netanyahu has vowed to press on against Hamas, he is coming under international pressure to halt the fighting because of the heavy civilian death toll.

U.N. shelters in Gaza have been struck by fire seven times in the latest Israeli-Hamas round of fighting.

UNRWA, the U.N. agency that assists Palestinian refugees, says Israel has been the source of fire in all instances. But it also has said it found caches of rockets in vacant UNRWA schools three times.

Israel accuses Hamas of using civilian areas for cover and says the Islamic militant group is responsible for the heavy death toll because it has been using civilians as "human shields."

Israeli artillery shells slammed into two high-rise office buildings Sunday in downtown Gaza City, police and witnesses said. Al-Kidra said more than 50 Palestinians were killed, including 10 members of one family in a single strike in the southern Gaza Strip.

Israel said that it attacked 63 sites on Sunday and that nearly 100 rockets and mortars were fired at Israel.