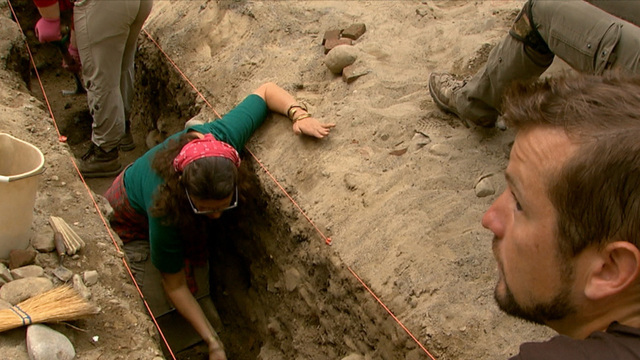 There are more than 100,000 public and private schools in the country, but the very first one was founded 370 years ago. Archaeologists in Boston are now trying to find it, CBS News' Michelle Miller reports.

When searching for hidden history in downtown Boston, you have to dig deep.

It is an urban archaeological exhibition done under the supervision of 30-year-old City Archaeologist Joseph Bagley.

"It's one of the last places where we can find something from the 1600s," Bagley said. "It's also the site of the Boston Latin School, which is the first school in the entire country."

The school was built in 1645, and its alumni include some of the nation's most revered patriots: Samuel Adams, John Hancock and ...

"Ben Franklin, who was the most famous dropout of the school," Bagley said.

It is safe to say it is the Founding Fathers' school.

Over the past 30 years, there have been dozens of these types of excavations around Boston.

There are about a million artifacts in Bagley's lab, from Revolutionary War cannonballs to a spearhead which predates the Pilgrims. According to Bagley, it is between 5,000 and 7,000 years old, making it older than the pyramids in Egypt.

"It was one of the most important things that was established in Boston in the first five years of the city's history," Bagley said.

Unearthing a piece of America's past, which helped shape its future.