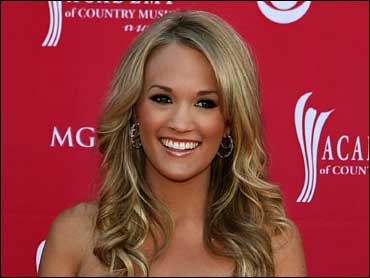 Carrie Underwood and Kevin Eubanks have been named the world's sexiest vegetarians in PETA's annual contest.

Results were released Tuesday by the People for the Ethical Treatment of Animals.

Underwood, 24, a Grammy-winning country singer, also won the title in 2005. Eubanks, 49, leader of NBC's "Tonight Show" band, is a newcomer to the winner's circle.

Eubanks leapt ahead of his competitors with help from Jay Leno, who encouraged viewers to vote for Eubanks and "bring honor" to the late-night NBC talk show.

"I'm gonna keep this campaign going," Leno said during a recent show after sharing a photo of a shirtless Eubanks with his audience. Leno said the shot, in which Eubanks is holding a backpack and posing against a woodsy backdrop, wasn't doctored.