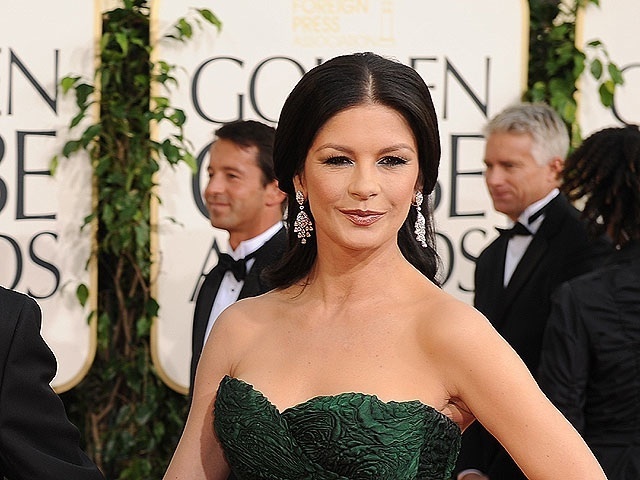 Actor Michael Douglas' courageous and very public battle to fight a cancer diagnosis may have taken a toll on his wife. Oscar-winning actress Catherine Zeta-Jones. It was announced Thursday, has been treated for bipolar II disorder, a condition made worse by stress.

When Douglas was diagnosed with stage four throat cancer in August 2010, Zeta-Jones was by his side. Douglas battled back from the debilitating disease and is now tumor-free, CBS News Correspondent Bill Whitaker reported.

The actress has also faced stressors outside her husband's illness.

Last April, her 31-year-old stepson, Cameron Douglas, was sentenced to five years in prison on drug charges, despite her begging the court for leniency. In addition, Douglas' ex-wife is waging a bitter court battle, seeking earnings from his 2010 "Wall Street" sequel.

Mike Fleeman, senior editor of People magazine, told CBS News, "During the cancer struggle of Michael Douglas, she made many references to feeling low, having to rebound, 'This is going to hit me in a few months'; again, innocuous enough at the time, but when you look at it now, it is very telling."

The star's publicist issued a statement Wednesday about Zeta-Jones' illness. It read, in part, "After dealing with the stress of the past year, Catherine made the decision to check into a mental health facility for a brief stay to treat her bipolar II disorder."

Dr. Mark Hyman Rapaport, of Cedars-Sinai Medical Center in Los Angeles, said, "One thing that isn't clear to people is the fact how brave individuals with bipolar disorder are. They slog through it, but feel as if they're carrying an extra 50 pounds of weight on their back, and they just power through it."

Until, Whitaker noted, they seek help, as Zeta-Jones did.

She explained, "We think of the highs and lows, the real mania. Bipolar II is characterized with more depressive episodes. That's where it kind of fits. And there's at least one episode of a hypomanic episode, which is not the very high out-of-control mania that we might come to expect. But much more elevated mood or rapid speech, or thoughts that are kind of all over the place. So it's that mania, but kind of mania-like. Not really so extreme."

Hartstein said the stress the actress has faced in recent months is a likely part of why Zeta-Jones checked herself into the mental health facility.

"Stress in and of itself isn't enough but it is a trigger," Hartstein said. "We don't know what her predisposition was to bipolar illness before. The fact is, has she had any mental health problems? We don't know. Family history will increase the likelihood of this being a problem. The environment can play a role, and then the biological. The two in combination, the stress is going to exacerbate the symptoms."

"The Early Show" co-anchor Erica Hill noted six million people in the U.S. are thought to suffer from some sort of bipolar disorder. What are the signs?

Hartstein said a person with a bipolar disorder does not have typical highs and lows.

"We all have ups and downing during our day or during our week," she said. "... We first want to look at the depression versus the hypomania. Are we having highs and lows that are extreme? Are we having an elevated mood (that's) out of character? Are we not getting enough sleep? You can really, three hours of sleep, not because you have to, but because you feel fine and rested. And are you having rapid speech? Those are just some of the symptoms that we want to look for. There are more, but those are some hallmarks."

"The two in combination seem to be the best and most effective way to treat it," she said.

Hartstein added, "It's a long-term illness like any other long-term illness. So if you continue to treat it using psychotherapy, using medication, you can live a full and healthy and productive life, and learn the things that are going to help manage your stress, so that when that stress comes, you can really be OK and manage those symptoms."

Hill remarked that Zeta-Jones' decision to come forward with news of her illness may inspire others who suspect they're also in need of treatment.

Hartstein added, "Asking for help if you're worried is really the first step."

Hill added, "And the hardest."