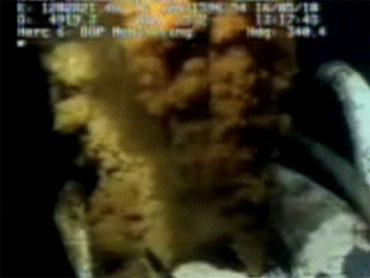 From the bottom of the sea, a mile deep, oil can be seen gushing from the blown-out well in the Gulf of Mexico. BP only released this video Tuesday, under pressure from Congress and CBS News.

The video showed oil and gas erupting under pressure in large, dark clouds from its crippled blowout preventer safety device on the ocean floor. The leaks resembled a geyser on land. The five-minute clip apparently was recorded late Saturday and Sunday afternoon from aboard a remotely operated submarine.

Barbara Boxer is one senator who pressed BP to give up the video, reports CBS News correspondent Sharyl Attkisson.

"It's hardly holding back any oil - I mean just still a massive situation," Boxer said.

Also on Tuesday, Interior Secretary Ken Salazar was grilled by skeptical lawmakers and acknowledged his agency had been lax in overseeing offshore drilling activities and that may have contributed to the disastrous oil spill.

"There will be tremendous lessons to be learned here," Salazar told a Senate panel in his first appearance before Congress since the April 20 blowout and explosion on the Deepwater Horizon rig.

His appearances before two of the three Senate panels holding hearings Tuesday on the giant oil spill came as federal officials kept a wary eye on the expanding dimensions of the problem. The government increased the area of the Gulf where fishing is shut down to 46,000 square miles, or about 19 percent of federal waters. That's up from about 7 percent before.

Government scientists were anxiously surveying the Gulf to determine if the oil had entered a powerful current that could take it to Florida and eventually up the East Coast. Tar balls that washed up on Florida's Key West were shipped to a Coast Guard laboratory in Connecticut to determine if they came from the Gulf spill.

Coast Guard Admiral Thad Allen told the Senate Commerce Committee the growing size and scattershot nature of the oil spill was creating "several challenges" in containing it and cleaning it up. He called it more complicated than any spill he's ever seen.

"What we're basically trying to do is protect the whole coast at one time," Allen said.

Salazar, testifying before the Senate Energy and Natural Resources Committee, promised an overhaul of federal regulations and said blame for the BP spill rests with both industry and the government, particularly his agency's Minerals Management Service.

"We need to clean up that house," Salazar said of the service. While most of the agency's 1,700 employees are reliable and trustworthy, he said, there were "a few bad apples."

President Barack Obama, who has decried the "cozy relationship" between government regulators and the energy industry, has proposed splitting the agency into two parts to separate regulatory duties from those who collect royalty fees from oil and gas companies.

Sen. Jeff Bingaman, D-N.M., the committee chairman, said the panel's mission was to decipher "the cascade of failures that caused the catastrophic blowout." In addition, he said, Congress needs to figure what must be done to make sure it never happens again.

While the cause of the accident at the well has yet to be pinpointed, information uncovered so far raises the question of where the Minerals Management Service was, Bingaman said.

"It is long past time to drain the safety and environmental swamp that is MMS," declared Sen. Ron Wyden, D-Ore. "This agency has been in denial about safety problems for years."

Sen. John Barrasso, R-Wyo., pointed to an AP investigation that found that rig that exploded was allowed to operate "without safety documentation required by government regulations" and that the government conducted fewer oil rig inspections than it initially claimed and less than its policy requires.

BP said Tuesday it was collecting about 84,000 gallons a day from a mile-long tube drawing oil from the blown-out well to a ship on the surface. But it cautioned that increasing the flow through the tube would be difficult.

Jane Lubchenco, administrator of the National Oceanic and Atmospheric Administration, told the Senate Commerce Committee it is still unclear whether any of the oil from the spill has reached the powerful Gulf current that would take it to the Florida Keys and possibly beyond.

But if that were to happen, said Lubchenco, "it would likely be significantly weathered and degraded and possibly diluted" and be in the form of tar balls not fresh oil. She said tar balls already found on the Florida Keys may have stemmed from the original BP rig explosion on April 20 and not the flow of oil from the well and pipes at sea bottom.

That assessment gave little solace to Sen. Bill Nelson, D-Fla., who said the possibility that oil could be flowing in a current that moves toward the keys and within a mile of southern Florida's beaches is "the nightmare"' he has long feared from offshore oil drilling.

Salazar said there are "robust regulations" on offshore drilling that need to be enforced and some - such as those on the blowout protector that failed - that need to be improved. But, he insisted, "the conclusion that this is an unregulated industry is not correct."

And Salazar, a former senator from Colorado, put some of the blame on Congress. A law specifying that approval of a deepwater drilling permit must be approved within 30 days "is an impediment to being able to do the kind of assessment that's needed to be done," he said. The MMS has been criticized for rushing through BP's permit for the Deepwater Horizon well without an additional broad environmental impact review, something that would have taken much longer than a month.

Salazar denied reports that MMS had approved a number of new oil drilling applications in deep waters of the Gulf since the Deepwater Horizon explosion and spill. He said no new deep water drilling has begun since April 20, and no wells will be drilled until a safety report is completed on the BP spill later this month.

Deputy Interior Secretary David Hayes told the committee that about a dozen applications were approved after April 20, but were suspended on May 6 before work began.

Obama plans to establish a presidential commission to look into the disaster, modeled on those for the 1986 explosion of the space shuttle Challenger and the 1979 nuclear accident at Three Mile Island in Pennsylvania.

Salazar cautioned against overreaction, noting that the Gulf waters produce nearly a third of the nation's oil. He said the Challenger disaster delayed the space program for 2 1/2 years and Three Mile Island "shut down the nuclear industry for 30 years."

White House spokesman Bill Burton said an executive order on the presidential commission would come out soon, possibly this week.

Acting U.S. Fish and Wildlife Service Director Rowan Gould says the spill's effects could be felt for decades and may never be fully known because so many affected creatures live far offshore.

Federal officials said they don't know whether the spill is to blame for the 189 dead sea turtles, birds and other animals that have been found along Gulf coastlines since the oil spill started. Officials said they don't know how many were killed by oil or chemical dispersants. Barbara Schroeder of NOAA's fisheries program said necropsies have not detected oil in the bodies of the sea turtles.