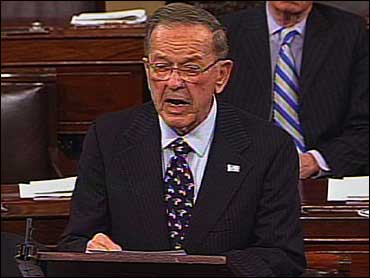 "Uncle Ted" Stevens, an old-style Senate giant and the chamber's longest-serving Republican, delivered his swansong address and yielded the floor for the final time Thursday. He was saluted by his colleagues as a staunch friend and teacher.

Family members and aides wept openly in the gallery as Stevens, who turned 85 this week, spoke of having "no rearview mirror" and looking forward to a time when he might be vindicated. He lost his bid for a seventh term this week after his convictions in federal court on charges of lying about gifts on Senate financial disclosure forms.

"I only look forward and I still see the day when I can remove the cloud that currently surrounds me," Stevens said.

The speech was a poignant coda to a four-decade Senate career that began not 10 years after his home state, Alaska, achieved statehood. It came as the 110th Congress finished business with a sizable caucus of senators over age 80 whose regard for each other transcended their party affiliation.

Perhaps a quarter of the Senate filed into the chamber to hear the speech, with Republican Leader Mitch McConnell turning his chair all the way around to face Stevens. Those gathered in the galleries and on the Senate floor gave the outgoing senator a standing ovation, a violation of Senate custom. But no one objected.

"More than anyone else, you have taught me the meaning of representing my state," said another retiring senior senator, Pete Domenici, R-N.M., 76.

Stevens lost his re-election bid this week to Anchorage Mayor Mark Begich, a Democrat, and is appealing his felony convictions. He has said he's not seeking a pardon from President Bush. (Click here to see complete Election results from Alaska.)

His farewell address came during the final proceedings of the 110th Congress, a sometimes surreal intersection of outgoing lawmakers and their successors preparing to take their seats next year.

Scattered around the Senate floor were some of those not returning. Among the farewells was one from another Republican departing under the cloud of scandal, Sen. Larry Craig of Idaho, who pleaded guilty in a men's airport sex scandal but has denied doing anything wrong.

Stevens was one of the Senate's most colorful characters, known for wearing a necktie bearing the Incredible Hulk during appropriations fights and - especially - over his efforts to allow gas and oil exploration in the Arctic.

Other senators rose to share stories of his gruff and tough style that belied a caring and patient friend beneath.

Sen. Pat Roberts, R-Kan., said that as a House member he was put off years ago by Stevens' "obstreperous, if not outrageous behavior" during a Republican retreat. Roberts recalled thinking: "'That Ted Stevens fellow is one of the most unique people I've ever met and I'd just as soon not meet him again."'

It was not to be. Elected to the Senate years later, Roberts recalled encountering Stevens, who walked up and jabbed a finger in the new senator's chest.

"He said, 'I know who you are,"' Roberts recalled of Stevens' remark. "And I said, 'Well, I sure as hell know who you are."' And he said, "'You allegedly know something about agriculture, (former Sen.) Bob Dole told me about you, said you were a standup guy.' I said, 'Thank you."'

Underneath, Roberts said, Stevens is a teddy bear, even though he's also been labeled other things.

"Under this great gruff facade - i.e., the mad penguin - here is a passionate, caring, wise and, yes, a man with a very good sense of humor which I have enjoyed immensely," Roberts said.