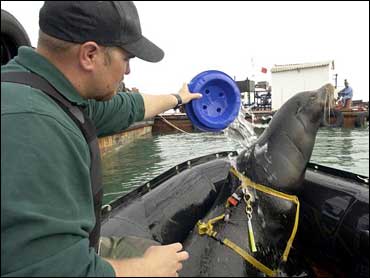 Make way for Zachary, the 19-year-old sea lion, one of the U.S. Navy's new secret weapons in any war against Iraq.

Brought to the Persian Gulf to swim alongside naval vessels and key facilities in this kingdom, Zachary and the other whiskered sea mammals are here to test their effectiveness in guarding against attack, by providing early warning of enemy saboteurs.

"If there is somebody down there who shouldn't be there, the sea lions will find them," said Lt. J.G. Josh Frey, a spokesman for the Navy's 5th Fleet.

The need for the stealthy sea lion was highlighted after the Oct. 12, 2000, attack on the USS Cole. The bombing, blamed on al Qaeda, occurred when a seemingly harmless dinghy eased up to the destroyer and blew a hole in its hull, killing 17 sailors and injuring 39.

A sea lion patrol, had it been there, might not have been able to detect the Cole attackers because they were above the surface, but the bombing demonstrated the vulnerability of navy ships to small-scale assault.

The U.S. military has used intelligent sea creatures for three decades, including dolphins that patrolled Persian Gulf waters during the late 1980s. But it is the first time sea lions are being used in a "real world environment," Frey said.

Thomas LaPuzza, a spokesman for the Space and Naval Warfare Systems Center in San Diego, the sea lions' base, said the deployment is a temporary test program to see how sea lions, along with other technologies, fare on the job.

The sea lions would eventually return to California and have not been issued operational orders yet, LaPuzza said.

The Navy chose the mammals for their ability to see in very low light, directional underwater hearing, and their capacity for repeated deep dives to up to 650 feet.

"They are a lot more agile in tight places in the water than dolphins," said Brenda Bryan, a civilian who is the head trainer in Bahrain.

Turns out, the sea lions have media savvy too. On a recent day in Bahrain harbor, Zachary the sea lion showed off for the cameras, jumping in and out of a dinghy and frolicking in the water.

Prompted by a signal from his handler, Zachary flopped into the water, rolled over a couple of times, and poked his head up, blinking his black eyes and waiting for the next instruction.

A handler whacked the side of the inflatable boat with a stick, and with a quick thrust of his powerful flippers Zachary easily lifted his 385 pounds out of the water and into the bow.

If they find one, the sea lion will come to surface to raise the alarm, Frey said. The handlers can then give the sea lion a clamp attached to a line that the animal can fix to the suspect's leg, marking him with a surface buoy and letting troops on the surface haul him in like a fish.

"The sea lions are ... protecting our ships and sailors and Marines in the port, and our coalition partners as well," said Cmdr. Jon Wood, a special operations officer at the Navy's Central Command in Bahrain.

The Navy started using marine mammals in the early 1960s, when scientists began investigating whether the ultra-sleek shape of dolphins had hydrodynamic qualities that could be used to improve underwater missiles.

Military researchers then began looking into how sea mammals' highly developed senses - like dolphins' sonar - could be harnessed. During testing in the 1960s, dolphins and sea lions quickly proved reliable carriers of messages, tools and other equipment. Plus they could be trusted to operate unaccompanied in open waters.

Dolphins were used in the 1970s during the Vietnam War. In the late 1980s, six Navy dolphins patrolled the Bahrain harbor to protect U.S. ships from enemy swimmers and mines and escorted Kuwaiti oil tankers through potentially dangerous waters.

Whales also have been tested for Navy use. A pilot whale successfully found and attached a recovery device to a dummy torpedo at 1,654 feet.

For now, the sea lions are spending their days getting accustomed to the warm waters of the Gulf. The sea lions are operated by Explosive Ordnance Disposal Mobile Unit Three and Navy Special Clearance Team One, both out of San Diego - where the water is a few degrees cooler.

"They have adapted really quickly and really well," Bryan said, adding that the sea lions are eating heartily and happily and aren't losing weight.