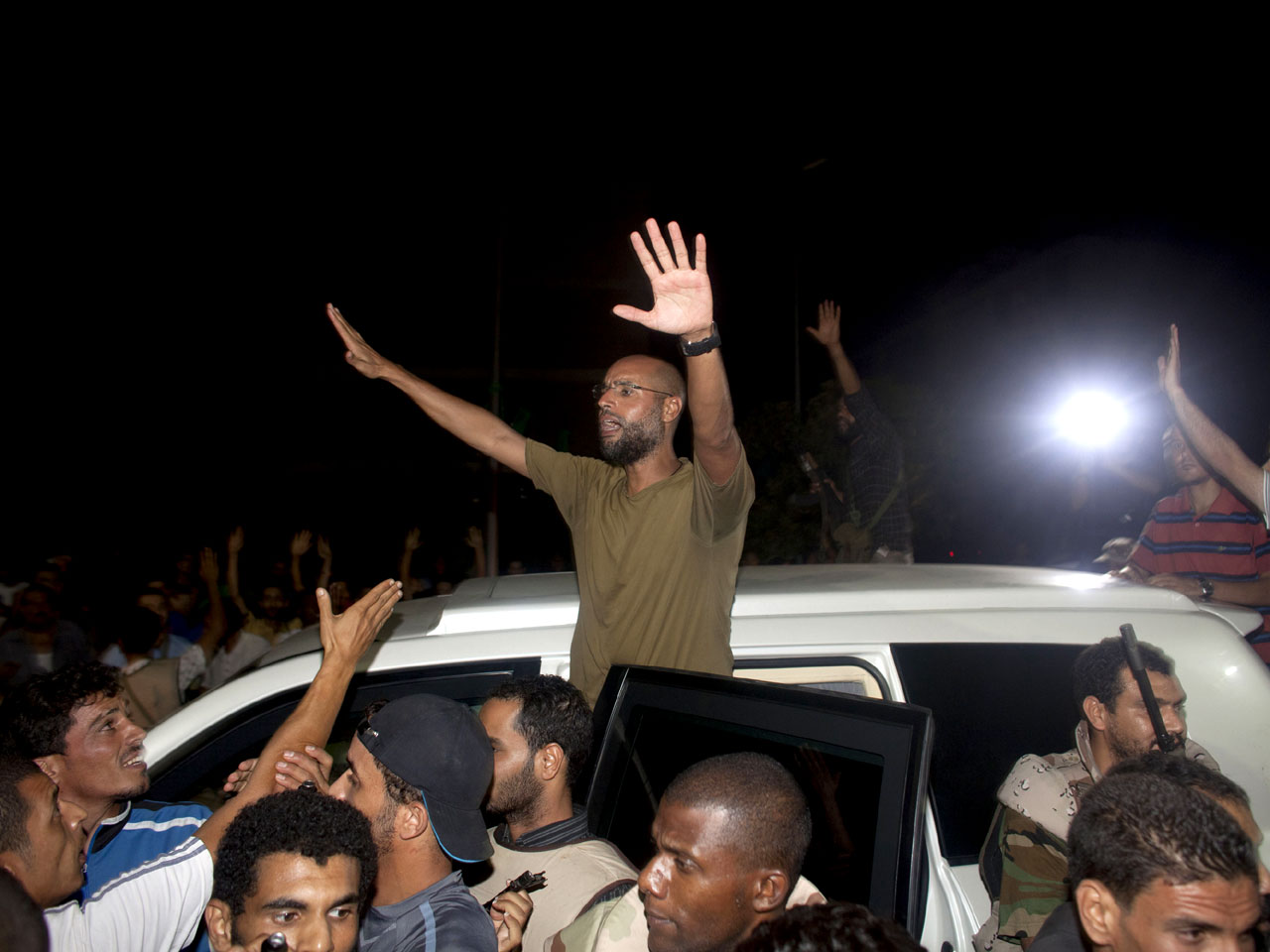 TRIPOLI, Libya - Libyan leader Muammar Qaddafi's son and one-time heir apparent, who was reported arrested by rebels on Sunday when they advanced on the capital Tripoli, is free.

Saif al-Islam turned up early Tuesday morning at the Rixos hotel, where about 30 foreign journalists are staying in Tripoli under the close watch of regime minders. He then took reporters in a convoy of black, armored SUVs on a drive through parts of the city under the regime's control.

Associated Press reporters were among the journalists who saw him and went on the tour. He told the reporters: "We are going to hit the hottest spots in Tripoli."

They then drove around streets full of armed Qaddafi backers, controlled by roadblocks. They visited several sites where Qaddafi supporters were gathered. The convoy ended up outside his father's Bab al-Aziziya compound and military barracks, where at least a hundred men were waiting in lines for guns being distributed to volunteers to defend the regime. They also toured the Qaddafi stronghold neighborhood Bu Slim.

Rebels appear to have taken control of large parts of the capital since they entered on Sunday night and Qaddafi's grip on power seemed to be slipping fast. But it was known that the area around the Rixos hotel and nearby Bab al-Aziziya were still under the regime's control.

In addition to Saif al-Islam, the rebels have claimed they also captured two other sons of Qaddafi, but that has not been independently verified.

There was no explanation from either Saif al-Islam or the rebel leadership council in the city of Benghazi as to why Saif al-Islam had been reported arrested, something that was confirmed by the International Criminal Court in the Netherlands. Saif al-Islam and his father are both wanted by the ICC for crimes against humanity.

Given that the ICC had confirmed the arrest, his bizarre appearance raised the possibility that he had escaped rebel custody.

When asked about the ICC's claim that he was arrested by rebels, he said: "The ICC can go to hell," and added "We are going to break the backbone of the rebels."

At Bab al-Aziziya he shook hands with his supporters, who waved green flags and posters of his father. He blamed NATO for bringing rebels into the capital through the sea.

He claimed NATO and the West distorted Libyan communications.

"They sent text messages to the Libyan people through the Libyana network. They stopped our broadcast transmission. They perpetuated an electronic and media war in order to spread chaos and fear in Libya. Also they brought gangs from the sea and by car to Tripoli," Saif said.

Libya state television went off the air on Monday, prompting speculation it had fallen to the rebels.

"And you have seen the Libyan people -- women and men: citizens, rise up and break the backbone of the rebels," he said. "Now we will go and turn around things in Tripoli city in order to see that the situation is all right."

A mood of joy mixed with trepidation settled over the capital as Monday wore on, with the rebels still fighting pockets of fierce resistance from regime loyalists firing mortars and anti-aircraft guns. Rebel spokesman Mohammed Abdel-Rahman, who was in Tripoli, said the "danger is still there" as long as Qaddafi remains on the run.

"The real moment of victory is when Qaddafi is captured," Mustafa Abdel-Jalil, head of the rebel National Transitional Council, told a news conference in the opposition's de facto capital of Benghazi, hundreds of miles east of Tripoli. He said the rebels have no idea where Qaddafi is and whether he is even in Tripoli. An Obama administration official said the U.S. had no indication that Qaddafi had left Libya.

Qaddafi's forces remained active, firing off a short-range Scud missile Monday near Sirte, Qaddafi's hometown and one of the few remaining cities still under his control, said U.S. military officials, who spoke on condition of anonymity to discuss military operations. It was unclear where the missile landed or if anyone was hurt.

NATO has vowed to keep up its air campaign until all pro-Qaddafi forces surrender or return to their barracks. The alliance's warplanes have hit at least 40 targets in and around Tripoli in the past two days - the highest number on a single geographic location since the bombing started in March, NATO said.

A day after the rebels rode into the city of 2 million, the situation remained volatile. Even though rebels claimed they were in control of most of Tripoli, they still appeared to be on the defensive, ducking for cover during frequent clashes with regime fighters. Throughout the day, the rebels sent reinforcements to the city from the north, south and southeast, and a rebel field commander said more than 4,000 fighters were part of the final push to bring down the regime.

The Obama administration official said the U.S. believes 90 percent of the capital is under rebel control, while regime loyalists still control Sirte and the southern city of Sabha. The official spoke on the condition of anonymity because they were not authorized to speak publically.