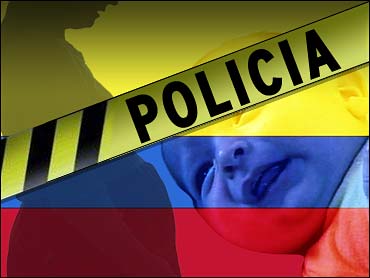 Police said Tuesday they have arrested a woman in the abduction of an unborn baby who was cut from its mother's womb while she was unconscious.

Sol Angela Cartagena said she was with her 2-year-old daughter when she had a drink at a hospital cafeteria in Girardot, southwest of Bogota, and suddenly felt lightheaded.

"When I woke up I was in the countryside with my 2-year-old daughter beside me," the woman told RCN TV, adding that someone had performed a Caesarean section on her and taken her baby.

Carlos Cespedes, a gynecologist, confirmed that someone had removed Cartagena's baby. Apparently Cartagena had been drugged, causing her to black out before the operation. It was unclear where it was performed, but authorities said Cartagena was lucky to be alive.

"This is the strangest thing I've seen in my professional career, and I believe this patient had all the luck in the world in not dying before getting to the hospital," he said.

Police officer Gustavo Silva said the woman who allegedly stole the baby was found due to tips and that prosecutors are now handling the case. People who had seen the unidentified woman with a baby wrapped in a sheet called authorities because they knew she had not been pregnant and they did not know where the baby had come from.

The baby was dehydrated but otherwise reported in good condition.

No other details on the case were available.

Colombia has the world's highest kidnapping rate, with more than 3,000 abductions a year, but authorities said they knew of no other case here where an unborn child was abducted.