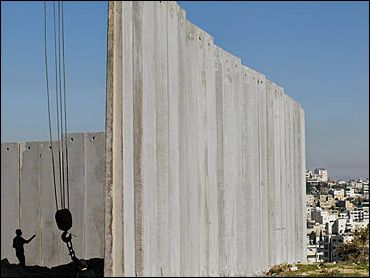 The U.N. General Assembly overwhelmingly adopted a resolution Tuesday demanding that Israel comply with a world court decision and tear down the barrier it is building to seal off the West Bank.

The vote was 150 in favor, 6 opposed including the United States, and 10 abstentions.

The assembly's vote, like the opinion of the International Court of Justice, is not legally binding, but both have symbolic value as international statements of support for the barrier's destruction.

The 191-member world body voted after lengthy negotiations between the Arab League and the European Union which resulted in a revised text that was accepted by both groups.

The court, as well as the resolution, demand that the barrier be dismantled and reparations be paid to Palestinians harmed by its construction.

Israel has refused to recognize the world court ruling, saying it has no authority to deal with the issue and has ordered construction to go on.

The Israeli Supreme Court, however, has ordered the army to change the route of the barrier in a 20-mile stretch near Jerusalem, saying it was causing too much hardship on the local Palestinian population.

Israel's U.N. Ambassador Dan Gillerman called the resolution "one-sided and totally counterproductive" and said construction of the barrier will continue in compliance with the requirements of international law as decided by Israel's Supreme Court.

"It is simply outrageous to respond with such vigor to a measure that saves lives and responds with such casual indifference and apathy to the ongoing campaign of Palestinian terrorism that takes lives. This is not justice but a perversion of justice," he said.

The Palestinians say the current route of the wall amounts to a land grab because parts of the barrier are being built on West Bank land that Israel conquered in the 1967 Middle East war. Israel says the fence is needed to keep out suicide bombers.

At the time, Israel said that it would not abide by the World Court's decision, reports CBS News Correspondent Robert Berger, because it does not acknowledge the court's authority to rule on the barrier.