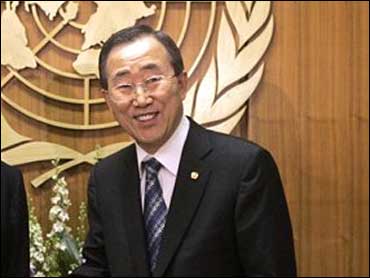 U.N. Secretary-General Ban Ki-moon was headed to Baghdad Thursday for talks Iraq's prime minister just as his government disclosed that it has been indirectly talking to Sunni insurgent groups over the past three months to persuade them to lay down their arms.

Ban is in Baghdad for only one day of meetings with Prime Minister Nouri al-Maliki, whose forces are working with the U.S. military in a major operation to curb violence in the Iraqi capital and the surrounding territory, U.N. officials said.

The meeting got off to an ominous start when an explosion hit the Green Zone as Ban and al-Maliki addressed reporters. Both men were not believed to be hurt.

The blast, from a mortar or rocket, landed near al-Maliki's office. Small chips of debris floated down from the ceiling above the U.N. chief after the big explosion rattled the building.

It is the first visit by the top U.N. official in nearly a year and a half.

The U.N. officials, who spoke on condition of anonymity because they were not authorized to release the information, would give no other details about the visit.

"The new Secretary General is making a point with his travels — that he is willing to play an activist role in diplomacy," said CBS News foreign affairs analyst Pamela Falk from the U.N. Thursday. "And given how many international crises are brewing right now, his role is being welcomed by most nations."

The top U.N. official was last in Baghdad when Ban's predecessor, Kofi Annan, visited the capital in November 2005.

Saad Yousif al-Muttalibi of the Ministry of National Dialogue and Reconciliation said talks with Sunni insurgent groups were initiated at the request of the insurgents and have been taking place inside and outside Iraq over the past three months.

He refused to identify the groups, but said they did not include al Qaeda in Iraq or Saddam Hussein loyalists. Members of the former president's outlawed Baath party took part, he added.

Speaking to The Associated Press in a telephone interview Thursday, al-Muttalibi said the negotiations were deadlocked over the insurgent groups' insistence that they would lay down their arms only when a timetable for the withdrawal of U.S.-led coalition troops in Iraq is announced.

The government's response was that such a move could only be taken when security is restored.

Future rounds of negotiations are planned, he said, but did not elaborate.

Al-Muttalibi's comments came one day after he expressed optimism in an interview with the British Broadcasting Corp. that Prime Minister Nouri al-Maliki's government was making progress in talks with insurgent groups, predicting some factions might be close to laying down their arms.

"One of the aims is to join with them in the fight against al Qaeda (in Iraq)," he told the BBC.

Reports have periodically surfaced in the past three years of talks between Iraqi and U.S. authorities and representatives of Sunni insurgent groups, but details of the contents of these negotiations and whether they made any progress always have been sketchy.

Groups said to have taken part in such talks often denied their participation in statements posted on the Internet.