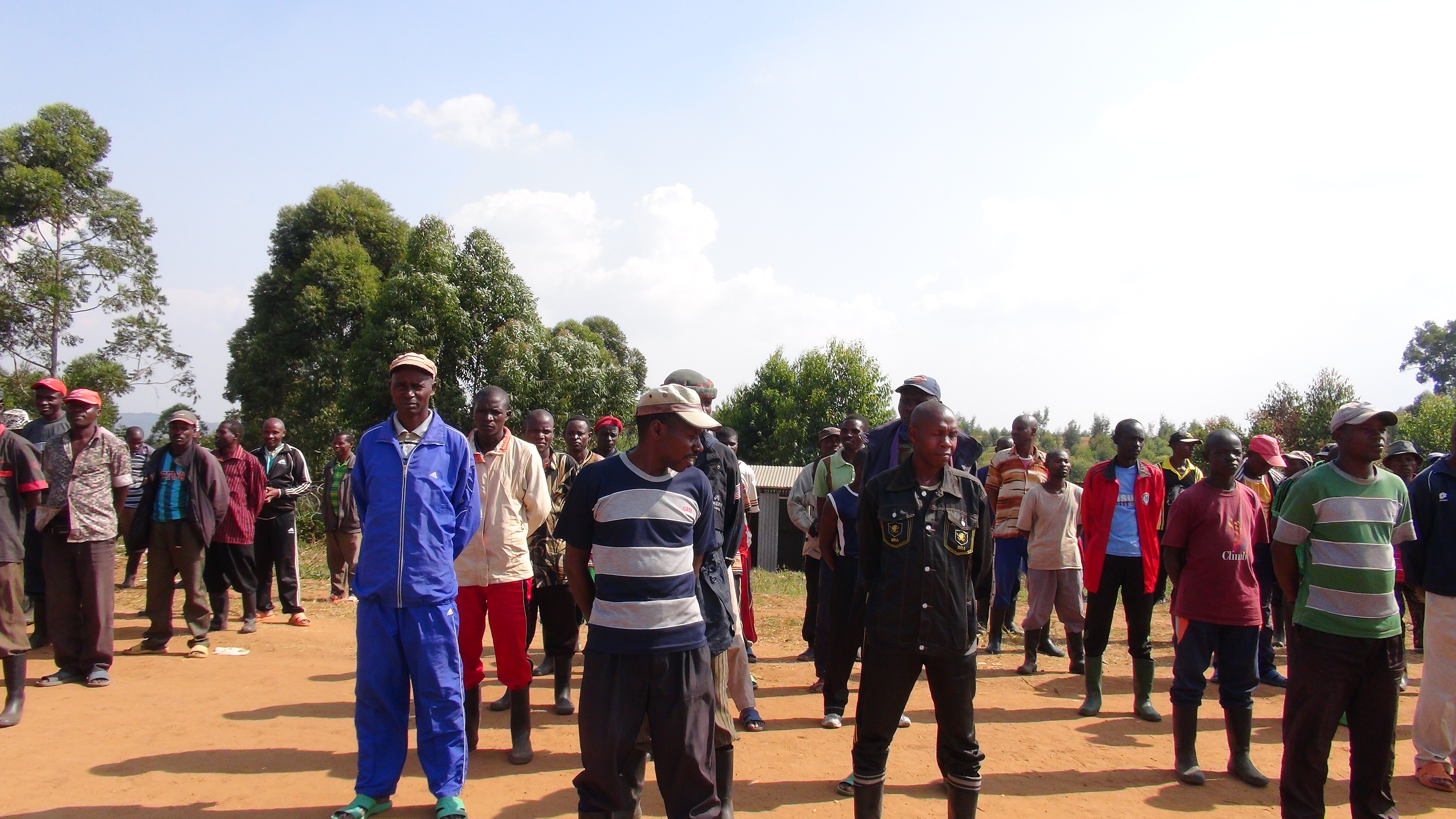 Twenty years after the genocide in Rwanda, the rebel militia that fled the country in the wake of the massacres is asking to return home.

The FDLR, a Hutu army founded by members of the militias that perpetrated the genocide against the Tutsis, continues to take refuge in neighboring Democratic Republic of Congo, where they have committed a litany of human rights abuses against Congolese villages and plagued the U.N. mission in eastern Congo as it has tried to eradicate armed groups and stabilize the war-torn region.

Facing the threat of military force from the U.N., the FDLR -- the French acronym for the Democratic Forces for the Liberation of Rwandan -- agreed to a voluntary surrender process, facilitated by the U.N. and the Congolese government. In May, 186 FDLR rebels laid down their arms, in the hope that their senior command would reach an agreement with the U.N. to clear a path back to Rwanda.

Several previous efforts to peacefully disarm the rebels have failed, but the FDLR claims this time is different; that the voluntary disarmament is a genuine effort to place their fate in the hands of the international community.

"It's our right, we have to go back," Colonel Wilson Irategeka told CBS News. But Irategeka has not yet surrendered, saying he needs to remain in the bush to direct the disarmament. The colonel says he moves constantly from village to village to avoid being killed by Rwandan forces.

Iratageka says the FDLR has been misrepresented and insists most within the group did not participate in the genocide and only want to live peacefully, both in Congo and in Rwanda.

"The Congolese local villages, they are family we have no problem with them," 40-year-old ex-combatant Kezi Francois Xavier tells CBS News. "The [Congolese] troops go around doing bad things and accuse FDLR of doing them."

Xavier is married to a Congolese woman and lives at a camp for surrendered combatants in eastern Congo with his wife and three children.

Abdallah Wafy, a high-ranking U.N. official based in Goma, DRC, echoes Irategeka's claims that categorizing the entire group as responsible for the genocide is misleading.

"Many people are not aware... today, about 300 or less [FDLR members] are the people who were there when the genocide happened. Others in the FDLR, they can't be presumed to be genociders."

Experts in the region say the FDLR is historically manipulative, untrustworthy, and prone to theatrical gestures when threatened with military force.

Sasha Lezhnev, associate director at the ENOUGH Project, says there is little be gained from giving the benefit of the doubt to a group that has historically relied on evasive tactics.

"This looks like the latest in the FDLR series, it's a repeat," he says. "The same cycle occurred in 2004 and 2005 when it looked like they were going to be hit militarily. They promised to disarm and didn't -- here we go again. It's a complete waste of time."

U.S. Special Envoy to the region, Senator Russ Feingold, has said, even in the event of a peaceful surrender, "there will be no political dialogue," a frequent request of the FDLR in discussions regarding the terms of their surrender.

"There's absolutely no chance that the Rwandans will agree to political talks with the FDLR," Lezhnev of ENOUGH explains. "The Rwandan government sees the FDLR as the Nazi party."

However, "there are other things that possibly could be negotiated, including some sort of quiet negotiation with moderate Hutu leaders to have some sort of forum... I think the Rwandan government realizes privately, quietly that they do have to take some steps," Lezhnev says.

Rwandan President Paul Kagame's government has so far refused to negotiate with the group's leadership, and there are significant doubts -- and fears within the FDLR -- that without political dialogue, their long-awaited homecoming will be to hostile ground.

"In the last ten years we expatriated 30,000 ex-combatants [to Rwanda]," Wafy of the U.N. says, adding that the difference now is that the FDLR wants "to be repatriated with a political process."

Colonel Irategeka says they insist on an internationally-brokered dialogue because "to return Rwandans to Rwanda like it has been done [by the U.N. so far] is impossible because everybody is scared... because those who returned, many are jailed. Those who are not jailed, they are watching over them. There is no liberty, there is no democracy."

Those fears are well-founded, according to University of Michigan political science Professor Christian Davenport, who has conducted extensive field work in Rwanda.

In Rwanda, "everyone exists in a situation where the current government has impunity to disappear whomever they wanted and arrest everyone," Davenport says.

The FDLR's vision of a shared government between Kagame's Tutsi-dominated RPF party and the historically Hutu FDLR is an unrealistic goal given the current state of governance in Rwanda, says Davenport, who says Kagame has had "complete impunity to eliminate" his political rivals during his 14 years of rule.

In recent years, former top aides in Kagame's government have spoken publicly about political assassinations orchestrated by the Rwandan government and long jail sentences for Rwandans charged with offenses such as "spreading rumors against the state," insulting the president, and "genocide denial."

But the FDLR, who insist they will shed their military identity but continue as a political party if they are allowed back in their homeland, might be willing to accept less than true two-party rule, Davenport says.

Given the political landscape, the group's desire to return to Rwanda could signal a new level of desperation, and a recognition within the FDLR's leadership that they are running out of options.

"It seems to be a highly desperate move," Davenport says, "When it comes to political opponents, it appears as though all bets are off with regards to Kagame's government."

As the surrendered combatants and their families await news of their future at U.N. camps, international calls for a military solution to Congo's FDLR problem mount.

At a meeting of the U.N. security council in August, Rwanda's U.N. ambassador called military intervention "the only viable option" and claimed that the group "continues to recruit and train combatants."

U.S. Ambassador to the U.N. Samantha Power reiterated the need for continued military pressure on the FDLR, especially she said, given their "track record of committing atrocities at the same time that it claims to be demobilizing."

But military operations raise two primary concerns for regional analysts: that the FDLR could stage retaliatory attacks against Congolese civilians and that the strikes themselves could cause collateral damage because of the combatants' tendency to live among civilians.

"The FDLR are here living with their wives and children," the U.N.'s Wafy says, "Maybe we need the Marines or special forces with special equipment to engage and neutralize them... I'm not quite sure with our blue helmet and the blue flag [of the U.N.], we can neutralize them."

On October 3, the U.N. Security Council assessed the progress of the disarmament effort and again called for the "swift neutralization," noting that the pace of the voluntary surrender had stalled and calling on the U.N. mission and government in Congo to "undertake military action" against FDLR leaders and members who have not yet surrendered.

Last week, Brazil's Lt-General Carlos Alberto dos Santos Cruz, a U.N. commander in Congo, urged the security council to back military action to protect civilians in Congo despite the risk of "collateral damage."

"I am absolutely convinced that the best way to protect civilians is being proactive rather than reactive," Alberto dos Santos Cruz said.

According to Colonel Irategeka, a peaceful surrender as a precursor to their return home remains the only option for his men and their families. The FDLR leader says he and his men would be defenseless against a U.N. attack.

"In case they come to kill our population, at that time we will have disarmed ourselves so if they kill, then they kill, we cannot fight against the U.N."

The International Women's Media Foundation supported Julia Steers and Nicole Tung's reporting from the Democratic Republic of the Congo.