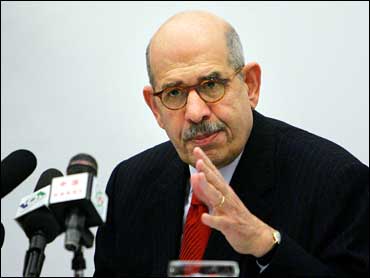 The chief U.N. nuclear inspector returned Wednesday from a one-day trip to Pyongyang saying that North Korea was "fully committed" to an agreement that requires it to shutter its main nuclear reactor and let in inspectors as soon as the U.S. drops financial sanctions.

Mohamed ElBaradei, head of the Vienna-based International Atomic Energy Agency, dismissed concerns that he was snubbed when a meeting with North Korea's chief nuclear envoy, Kim Kye Gwan, was canceled.

Kim "was sick. He fell ill after coming back from New York," ElBaradei told reporters. "It is not true that he was too busy."

He described the talks on how North Korea will close its main atomic reactor at Yongbyon as "quite useful."

"They said they are fully committed to the Feb. 13 agreement, that they are ready to work with the agency to make sure that we monitor and verify the shutdown of the Yongbyon facility," he said. He added that officials in Pyongyang also "reiterated they are committed to the denuclearization of the Korean peninsula."

ElBaradei's trip was a significant first step toward renewed relations between the IAEA and the North, which kicked out the agency's inspectors in late 2002, but he cautioned that "the agreement is still quite fragile, precarious, so I hope all parties will see to it we continue to solidify that agreement."

Assistant Secretary of State Christopher Hill, the top American nuclear negotiator, said after arriving in Beijing that ElBaradei's trip was a "good sign."

International talks are planned in Beijing on Monday to look at progress in enacting a milestone deal last month under which North Korea has 60 days to shut down and seal the Yongbyon reactor in exchange for economic aid and political concessions.

The IAEA is supposed to monitor and verify the shutdown. The Yongbyon reactor is believed to have produced enough plutonium to produce about a dozen nuclear bombs, including the device North Korea detonated in a test on Oct. 9.

ElBaradei said North Korea "was very clear they are ready to implement the Feb. 13 agreement once the other parties implement their part of the deal."

Meanwhile, the Bush administration announced steps Wednesday that could enable the release of North Korean assets frozen in a Macau bank, an action sought by Pyongyang as part of a nuclear arms deal. In a two-step decision, the Treasury Department also said it is severing ties between Banco Delta Asia and the U.S. financial system because of its alleged money laundering for North Korea.

The frozen accounts in the Banco Delta Asia, including $24 million in North Korean assets, have been a sore spot for the North Korean government.

The U.S. had alleged that the bank helped North Korea distribute counterfeit currency and engage in other criminal activities. The allegations scared banks around the world from dealing with Banco Delta Asia.

The Treasury Department also is expected to help overseas regulators identify account holders at higher and lower risks of involvement in illicit activities. This risk assessment in turn could be used by Macau to release money that has been frozen.

Hill said he was likely to meet ElBaradei in Beijing on Thursday.

Delegates from those countries were set this week to meet with their counterparts to discuss economic and energy cooperation, peace and security in Northeast Asia and the denuclearization of the Korean Peninsula as part of working group sessions established under the landmark pact. Those meetings were to take place through the weekend.

South Korea's chief nuclear negotiator Chun Yung-woo said after flying into Beijing on Wednesday that the talks were not aimed "at producing any breakthrough" or a new agreement.

The North Korean nuclear crisis began in 2002, when Washington alleged that Pyongyang had a uranium enrichment program in addition to its acknowledged plutonium program. North Korea then withdrew from the Nuclear Nonproliferation Treaty and expelled ElBaradei's inspectors.

The North is to eventually receive 1 million tons of heavy fuel oil for abandoning all its nuclear programs. U.S. officials have stressed this must include an alleged uranium enrichment program, which the North has never publicly admitted having.