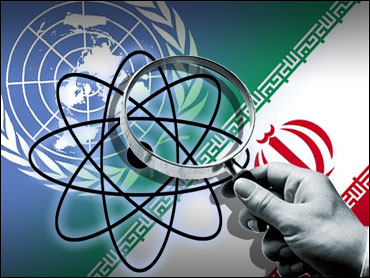 Iran will not respond to incentives to halt its nuclear program before mid-July, at least two weeks past the date sought by the U.S. and its partners, U.N. Secretary-General Kofi Annan said Thursday after meeting with Iran's foreign minister.

"I don't think they will give an answer before the G-8 meeting in St. Petersburg," Annan told reporters after a meeting with Foreign Minister Manouchehr Mottaki. The Russian meeting of the world's eight industrialized democracies is to run July 15-17.

"I expect their answer to come after that meeting, but I can't tell you specifically on what date," Annan said.

The U.S. has said that Secretary of State Condoleezza Rice and diplomats from the other five nations offering Iran the incentives agreed by phone that they expect an answer around the time of a meeting of G-8 foreign ministers on June 29 in Moscow.

The United States reiterated that Iran should respond by next week.

The Bush administration is reluctant to set a specific deadline, but U.S. National Security Adviser Stephen Hadley said that it would be "helpful and useful if we could get a response and know where the Iranians are" before the June 29 meeting.

U.S. Ambassador to the U.N. John Bolton said June 29 would be "an ample period of time, very reasonable time in which Iran could respond."

"I think we've made it clear that if the Iranians don't choose the path that's been presented to them, the alternative path is one of increasing isolation, that we'd be prepared to move very quickly in the Security Council," Bolton said.

"I hope it will give its official answer before too long," Annan said.

Iran's president said Wednesday his country would take until mid-August to respond to the incentives, prompting President Bush to accuse Tehran of dragging its feet.

Annan said his talk with Mottaki was "very useful."

"Iran maintains that its interest in nuclear energy is purely for peaceful purposes, and I have stressed to Iranian leaders, including Mr. Mottaki, that it is very much in their interest to convince the world of that by cooperating fully with IAEA," Annan said, referring to the U.N.'s nuclear watchdog agency.

Iranian officials say "everything can be discussed at the table, and that I presume includes the question of enrichment," he said.

The international offer seeks to persuade Tehran to suspend uranium enrichment in return for incentives including an offer by the United States to provide Iran with peaceful nuclear technology, lift some sanctions and join direct negotiations with Tehran.
Iran insists that its intentions are purely peaceful. The United States and its allies suspect its enrichment activities, which can produce fissile material for a warhead or fuel for a nuclear reactor, are cover for a weapons program.

Iranian officials have made tough vows never to surrender their "right" to enrich uranium. But they have not directly rejected a suspension and have said they see some good and some bad in the package.

A delay in Tehran's response may stem from internal divisions; hard-line clerics are pressing the Iranian government to reject the deal outright.