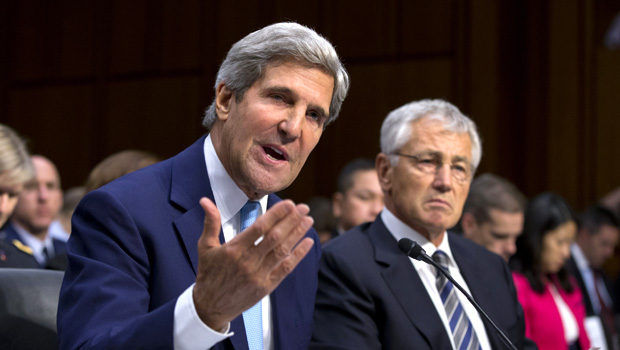 President Obama, in the end, had no choice but to plead with Congress for limited authorization to launch a limited air strike to wage a limited war for a limited duration with limited aspirations, limited military targets, limited strategic aims, and limited collateral damage ... all to limit potential unintended consequences.

The authorization Obama sent to Congress might be rewritten with more limitations added. And Obama is OK with that "so long as we are accomplishing what needs to be accomplished."

If the president wants to accomplish what needs to be accomplished, he better move the polls. The Washington Post and the Pew Research Center found deep skepticism that could harden into immovable opposition.

Meanwhile, Syria is moving weapons trying to thwart an attack.

Even though Obama left it to Secretary of State John Kerry last week to sound like Dirty Harry, it was the president who lived out Inspector Harry Callahan's aphorism: "A man's got to know his limitations."

The limits were not those legally constraining a president from swift, unilateral military action on behalf of U.S. national security interests. Many presidents have acted without Congress. According to a Justice Department analysis provided to President Bush after 9/11, presidents had launched 125 military campaigns without congressional approval.

What limited Obama was his reluctance to immediately and militarily enforce his "red line" rhetoric against the chemical-weapons use by Syria's Bashar al-Assad. Even before Obama announced he would seek congressional authorization for military strikes, the administration began to erase the president from the entire "red-line" equation. It was all about international norms, not Obama. That's why the White House thought it was wise for British Prime Minister David Cameron to take the lead. When Parliament refused, Obama was alone with his red line.

It was and remains an uncomfortable operational marriage. Hence the move to Congress to share the burden, embrace the rhetoric, and own the military consequences of action or inaction.

During the beginning of the process, Kerry told the Senate Foreign Relations Committee on Tuesday that it wasn't even Obama's rhetoric, despite the obvious evidence. Kerry said Obama was merely drawing a red line "anyone would draw." Except "anyone" is not president of the United States. Obama is. He drew the red line. At least one Democrat, Rep. Charles Rangel of New York, now considers Obama's "red line" an embarrassment.

There was another limitation Obama confronted, one far less understood but, in my view, the most important of all. Obama faces a continuing-resolution vote at the end of the month to keep the government open. That vote is a table-setter for all the tough budget and debt votes Obama and Congress will confront--the first skirmish before the larger fights over raising the debt ceiling to avoid default and the fate of sequestration 2.0.

If the White House had not gone to Congress on Syria, the CR vote would have become Obama's legislative Waterloo. It would have become the bipartisan crucible for every grievance associated with the Syria campaign. Kerry spelled them out with me on "Face the Nation" even as he rejected the contention that lawmakers were already in a bipartisan lather. According to Kerry, the risk of not going to Congress was that we would "have the debate after an attack be all about our constitutional process or did the president abuse his power or was it correct and have weeks of--of sort of being torn apart about that."

The "being torn apart" dynamic would have visited itself first on the CR vote. Democrats and Republicans would have used it to punish Obama and register their outrage over being ignored or circumvented. Losing a vote on keeping the government open because Congress was in an uproar--full-throated and bipartisan--about Syria would have doomed Obama in the sequester and debt-limit fights. And it would have virtually eliminated any chance of passing immigration reform, rendering Obama's second term a legislative nullity.

Going to Congress does not guarantee Obama victory in Syria or anywhere else. Victory in Syria is so impossible to define that Obama isn't even seeking it. His only goal is to "deter" Assad from using chemical weapons again and "degrade" his capacity to even consider the option with military strikes that are, according to Kerry, "limited in duration and scope." If Obama wins the vote in Congress, he will have created a legislative coalition of limitations. Whatever coalition Obama assembles globally will be a rhetorical one--except for France, which will likely bug out if Congress rejects Obama's military plans. That is a far cry, historically, from President Bush's much-maligned "coalition of the willing" in Iraq.

Limits define previous Obama policy in Syria. The administration now reluctantly admits that Syrian opposition forces have not received a single weapon since Syria was found to have crossed the red line the first time. The U.S. has delivered MREs and medical kits--neither of which, amazingly, proved potent against Syrian artillery, tanks, and automatic weapons.

Even, so House Speaker John Boehner, R-Ohio, and Majority Leader Eric Cantor, R-Va., support Obama. There is no evidence they will whip the vote and every suggestion Boehner and Cantor want to avoid blame if it fails. That's why, after Boehner announced his support, spokesman Brendan Buck said that to win the upcoming vote Obama had "to make his case to the American people and their elected representatives." Further, Buck said that Obama must "take the lead on any whipping effort."

Obama won't have much chance to do that in Sweden or at the G-20 Summit in St. Petersburg, Russia. But Vice President Joe Biden will make the case privately while Kerry, Defense Secretary Chuck Hagel, and others carry the ball publicly. The administration received a significant boost late Tuesday when the American Israel Public Affairs Committee urged support for the Syria resolution. That buttresses White House arguments that Israel has a stake in the Syria debate and that gives Obama vital lobbying pull with fence-sitters of both parties.

In the end, Obama wants to share the burden and limit the blame in Syria. So do Boehner and House Republicans.

This is what limited action on behalf of limited means with limited duration yields. But it doesn't mean both sides won't be able to accomplish what needs to be accomplished.