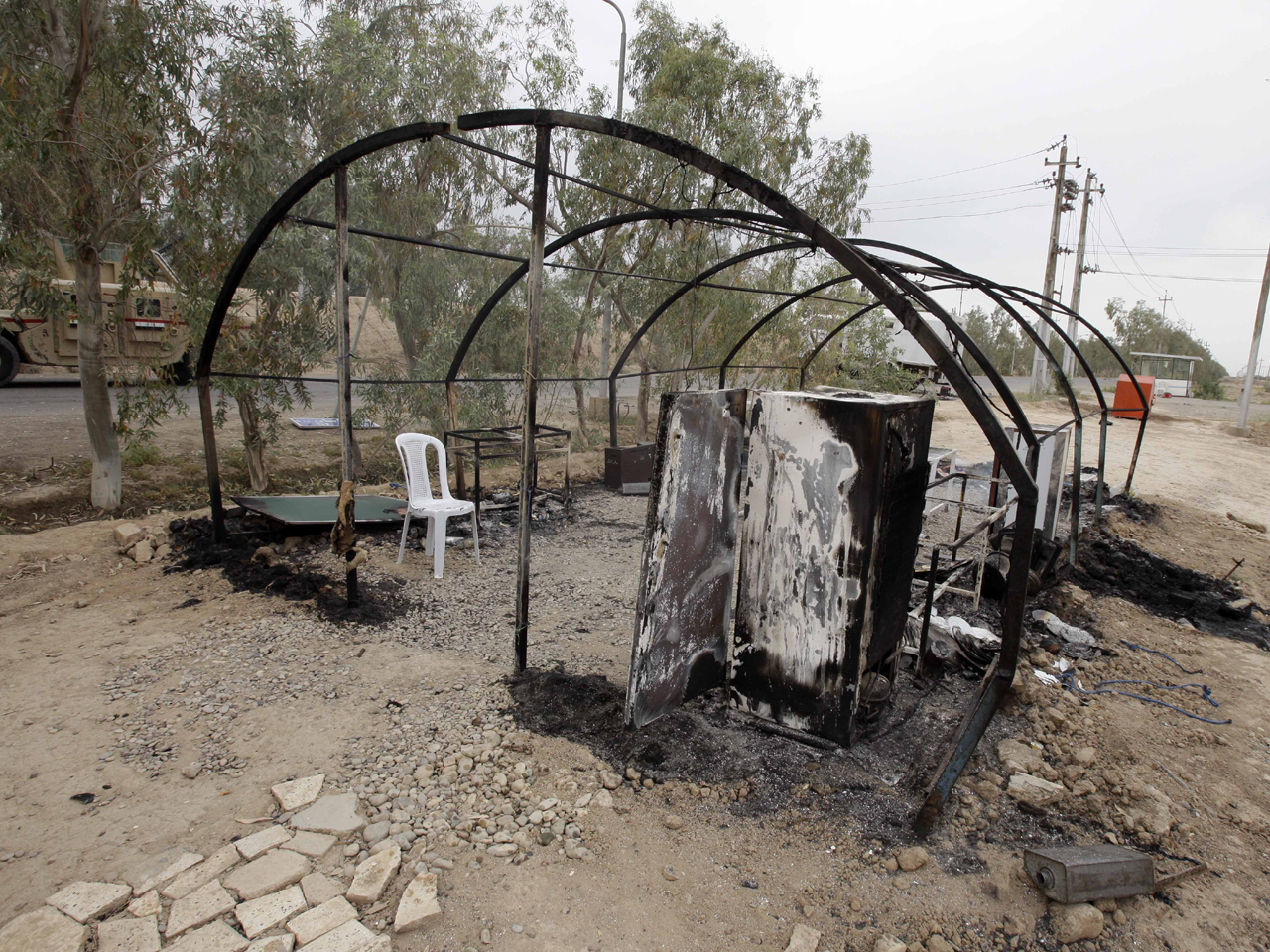 BAGHDAD - An Iraqi army raid last week on Camp Ashraf left 34 Iranian exiles dead, according to a U.N. spokesman who on Thursday offered the first independent death toll for the attack that drew sharp rebukes from Baghdad's Western allies.

The April 8 raid targeted the People's Mujahedeen Organization of Iran, which seeks to overthrow Iran's clerical leaders. The group won refuge at Camp Ashraf years ago during the regime of Saddam Hussein, who saw them as a convenient ally against Iran. But since then, the exiles have become an irritant to Iraq's new Shiite-led government, which is trying to bolster ties with Iran.

The attack was the climax of days of building tensions between the Iraqi army and the Ashraf residents, who feared they were about to be attacked after nervously watching soldiers bulk up their forces outside the camp. The Iraqi general who led the raid said it was in response to Ashraf residents pelting his troops with rocks and throwing themselves in front of military cars.

The U.N. visit was critical because the Ashraf residents and the Iraqi government have issued wildly different accounts of the raid and the reasons behind it.

U.N. human rights spokesman Rupert Colville in Geneva said a team of U.N. observers saw 28 bodies still at the camp during a Wednesday visit to the compound in eastern Diyala province. Most of the bodies appeared to have been shot and some were women, he said. Three of the bodies appeared to have been crushed to death, a Western diplomat in Baghdad said — likely from being run over by a car.

"It's clearly a very serious incident and we are trying to get more information," Colville said. He said six bodies are "elsewhere" but did not clarify where.

Both Iran and the U.S. consider the People's Mujahedeen Organization of Iran to be a terrorist threat, although the European Union removed the group from its terror list several years ago.

After Saddam fell, U.S. troops took control of Camp Ashraf, disarmed its fighters and confined the resident to their 30-square-mile camp. In return, the military signed an agreement with the camp's 3,400 residents giving them protected status under the Geneva Conventions.

But it's not clear whether the residents still have those legal protections.

Iraqi allies in Washington and London and U.N. officers in Geneva sharply criticized last week's raid, but Iran praised it.

Kerry called the raid "deeply disturbing" and "simply unacceptable." He called on the Iraqi government to conduct a full and serious investigation and said the U.S., U.N. and European Union must help broker a peaceful solution between the two sides.

"Corrective action is imperative," Kerry said in a statement. "The (Iraqi) investigation must hold accountable the responsible parties and ensure that there will be no sequel to these horrific events."

The U.N. inspection of the camp came five days after the human rights agency first demanded to be allowed in. The Iraqi army and police have blocked access to the camp for more than a year, following a similar raid in July 2009.

A U.S. Army medical team also entered the camp last weekend to provide humanitarian aid but has refused comment on what it looked like inside. Journalists have not been allowed in.

Until the U.N. visit, the only official casualty count in the raid came from the morgue at Baqouba public hospital, where officials said they received 12 bodies from the camp.

Ashraf resident Shahriar Kia said the 12 bodies at the morgue were likely among about 50 wounded residents who were taken to the hospital for treatment hours after the raid, who later died. He demanded that the U.N. publicly release its findings. The group's political movement, the Paris-based National Council of Resistance of Iran, urged the U.S. and the U.N. to protect and monitor the camp.

"This atrocity is a clear case of crime against humanity, war crime and crime against international community and could be repeated at any moment," said Maryam Rajavi, president-elect of the resistance group.

Iraqi government spokesman Ali al-Dabbagh did not immediately respond Thursday to the U.N. findings. Earlier this week, he said the Iraqi government voted to help move the Ashraf residents outside the country of by the end of the year because "Iraq is not the choice for them."

Al-Dabbagh did issue a statement Thursday that welcomed what it described as U.S. support to the government's efforts to find "another option for Ashraf camp residents to live in rather than Iraq."

The Ashraf residents and their lawyers in Washington dispute that, and demand that the American military continue to protect them and intervene on their behalf with the Iraqi government.

The International Committee of the Red Cross in Geneva, which oversees whether nations are complying with the Geneva treaties, has declined to make a public pronouncement on the issue.