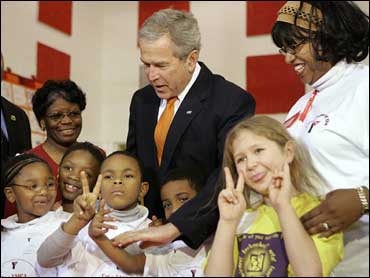 British and American children are among the worst off in the industrialized world, according to a U.N. report Wednesday that ranked the two countries at the bottom of 21 wealthy countries in children's well-being.

The UNICEF report showed that national wealth alone did not guarantee a high ranking, with countries that lagged in income sometimes scoring ahead of richer ones. Countries in northern Europe generally led the pack.

CBS News reporter Larry Miller reports that the highest ranking the U.S. managed was coming in 12th, for education.

Overall, the only country deemed worse for youngsters by the report is Britain, which came in only slightly behind the U.S. across the six categories measured: material well-being, health and safety, education, peer and family relationships, behaviors and risks, and young people's own subjective sense of well-being.

"The United Kingdom and the United States find themselves in the bottom third of the rankings for five of the six dimensions reviewed," UNICEF said in a summary of the report.

The U.S. was last among the 21 nations for health and safety, measured by rates of infant mortality, low birth weight, immunization, and deaths from accidents and injuries.

Meanwhile, Britain was last in family and peer relationships ranking, which measured such things as the rate of single-parent families and whether families ate the main meal of the day together more than once a week. It was also last in behaviors and risks, which considered factors such as the percentage of children who ate breakfast, were overweight, used drugs or alcohol or were sexually active.

The British government said information used in the U.N. study was outdated and did not take note of recent improvements to education, living and health standards. Some of the statistics went back as far as 2000 or 2001.

"In many cases the data used is several years old and does not reflect more recent improvements such as the continuing fall in the teenage pregnancy rate or in the proportion of children living in workless households," said a spokeswoman for Department for Education and Skills, on customary condition of anonymity.

"It is shocking that we are doing so badly at bringing up our children," Brooke said. "Every child should be entitled to live in a stable, loving family environment."

The Netherlands topped the combined list, placing in the top 10 for all six categories studied.

"In Holland, you can buy and smoke marijuana at licensed coffee shops. Every city there has a red-light district for prostitution. Yet, abuse of sex, booze and drugs is not a problem there," reports Miller. American and British children run the highest risk of problems with sex, drugs and alcohol.

The report concluded that there was no obvious relationship between levels of child well-being and per-capita gross domestic product.

"The Czech Republic, for example, achieves a higher overall rank for child well-being than several much wealthier countries including France, Austria, the United States and the United Kingdom."

Marta Santos Pais, the study's director, said future reports would devote even more energy to assessing how children perceive their own well-being and needs.

"Very often we base our assessment and governments shape their policies on the basis of what adults feel the policy measures are achieving," she said. "It's always important to see how the beneficiaries of those policies are assessing the impact of the policies."