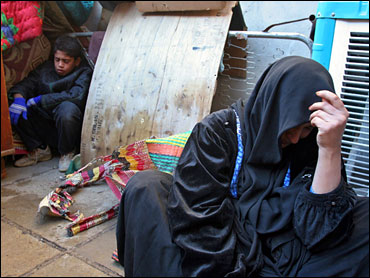 At least 101 Iraqis died in the country's unending sectarian slaughter Wednesday, and the United Nations reported that 3,709 Iraqi civilians were killed in October, the highest monthly toll of the 44-month-old war and one that was sure to be eclipsed when this month's dead are counted.

The United Nations Assistance Mission for Iraq also said citizens were fleeing the country at a pace of 100,000 each month, and that at least 1.6 million Iraqis had left since the war began.

President Bush and Iraqi Prime Minister Nouri al-Maliki announced they will meet Nov. 29-30 in Jordan to discuss the deteriorating security situation in Iraq. "We will focus our discussions on current developments in Iraq, progress made to date in the deliberations of a high-level joint committee on transferring security responsibilities, and the role of the region in supporting Iraq," they said in a statement.

Although collecting accurate statistics in a war zone is impossible, these figures, compiled with the help of the Iraqi health authorities, give some idea of the overall scale and shape of the violence, CBS News correspondent Elizabeth Palmer reports. One hundred and ten children were killed in the past two months and 351 women, according to this report, are being singled out for abuse by religious extremists.

Life for Iraqis, especially in Baghdad and cities and towns in the center of the country, has become increasingly untenable. Many schools failed to open at all in September and professionals — especially professors, physicians, politicians and journalists — were falling to sectarian killer at a stunning pace.

Three hundred teachers have been killed since the start of the year. About 2 million Iraqis have either left, or been forced from their homes, since the invasion, and 1.5 million have left the country already, Palmer reports. And many of those leaving are the best and the brightest.

Lynchings have been reported as Sunnis and Shiites conduct a merciless campaign of revenge killings. Some Shiite residents in the north of Baghdad neighborhood of Hurriyah claim that militiamen and death squads are holding Sunni captives in warehouses then slaughtering them at the funerals of Shiites killed in the tit-for-tat murders.

"Because the U.N. Assistance Mission for Iraq is on the ground throughout Iraq, they have a more accurate birds-eye view of the deteriorating conditions," said CBS News foreign affairs analyst Pamela Falk from the U.N. "The human rights report covers areas that have not been available from other agencies or the press, including arbitrary detentions and torture."

The U.N. report was released as assassins killed a bodyguard of Iraq's parliament speaker one day after a bomb exploded in the hot-tempered politician's motorcade as it drove into a parking lot inside the fortified Green Zone in central Baghdad. It was a major security breach in the heavily guarded compound that houses the U.S. and British embassies and the Iraqi government.

The U.N. figure for the number of killings in October was more than three times the 1,216 tabulated by The Associated Press and nearly 850 more than the 2,867 U.S. service members who have died during the war.

The U.N. report said Iraq's heavily armed and increasingly brutal Shiite militias were gaining strength and influence and that torture was rampant, despite the Iraqi government's vow to reduce human rights abuses.

"Hundreds of bodies continued to appear in different areas of Baghdad — handcuffed, blindfolded and bearing signs of torture and execution-style killing," said the report by the U.N. Assistance Mission for Iraq, or UNAMI. "Many witnesses reported that perpetrators wear militia attire and even police or army uniforms."

Wednesday's death count included 76 bodies found dumped in four cities, 59 of them in Baghdad alone, according to police, who said at least 25 people had been gunned down.

The two primary militias in Iraq are the military wings of the country's strongest Shiite political groups on which Prime Minister Nouri al-Maliki is heavily dependent. He has repeatedly rejected U.S. demands that he disband the heavily armed groups, especially the Mahdi Army of radical anti-American cleric Muqtada al-Sadr.

"I think the type of violence is different in the past few months," Gianni Magazzeni, the UNAMI chief in Baghdad, told a news conference. "There was a great increase in sectarian violence in activities by terrorists and insurgents, but also by militias and criminal gangs."

He noted that religious clashes have been common since Sunni Arab insurgents bombed a major Shiite shrine on Feb. 22 in Samarra, north of Baghdad.

UNAMI's Human Rights Office continued to receive reports that Iraqi police and security forces have either been infiltrated by or act in collusion with militias, the report said.

It said that while sectarian violence is the main cause of the civilian killings, Iraqis also continue to be the victims of terrorist acts, roadside bombs and drive-by shootings, while some have been caught in the cross fire between rival gangs.

The U.N. said its figures for civilian deaths were based on reports from the Iraqi Health Ministry, the country's hospitals and the Medico-Legal Institute in Baghdad. The previous monthly record was 3,590 for July.

Iraqi government spokesman Ali al-Dabbagh called the U.N. report "inaccurate and exaggerated" because it was not based on official government reports.

Asked in a telephone interview if any such report existed, al-Dabbagh told the AP that one "was not available yet but it would be published later."

Access to the U.N. news conference was blocked for many because the main entrance to the Green Zone was closed as U.S. forces checked for a bomb in the area, a U.S. military official said on condition of anonymity because he was not authorized to release the information.

The bomb attack on the motorcade of Speaker Mahmoud al-Mashhadani, a hard-line Sunni Arab nationalist reviled by many Shiites, was the fourth assassination attempt against a high-ranking Iraqi government official in recent days.

Last summer, Shiite and Kurdish parties organized an unsuccessful bid to oust al-Mashhadani as parliament speaker after he called the U.S. occupation of Iraq "the work of butchers."

On Nov. 1, al-Mashhadani had to be physically restrained from attacking a Sunni lawmaker. The speaker had been holding a nationally televised news conference when he lashed out at the legislator, Abdel-Karim al-Samarie, for alleged corruption and failure to attend sessions. He called him a "dog" — a deep insult in Iraq and other Arab societies.

At least 92 journalists have been killed in Iraq since the U.S.-led war began in March 2003, according to an Associated Press count, based on statistics kept by the New York-based Committee to Protect Journalists.

Thirty-six other media employees, including drivers, interpreters and guards, have been killed — all of them Iraqi except for one Lebanese.

The U.S. military reported the deaths of two U.S. soldiers Tuesday. One was killed by a roadside bomb and the other died from non-combat causes. So far this month, 49 American service members have been killed or died.