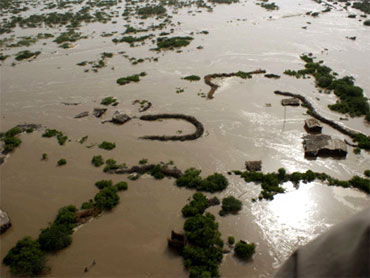 Hundreds of thousands of Pakistanis fled floodwaters Friday after the surging River Indus smashed through levees in two places, but many refused to leave the danger zone while others took shelter in an ancient graveyard for Muslim saints.

The new flooding came after the Taliban issued a veiled threat against foreign aid workers helping out in the crisis, a development likely to complicate the massive relief effort. More than 8 million people are in need of emergency assistance across the country.

The floods began in the mountainous northwest about a month ago with the onset of monsoon rains and have moved slowly down the country toward the coast in the south, inundating vast swaths of prime agricultural land and damaging or destroying more than 1 million homes.

About 175,000 people are believed to have fled their homes overnight in the southern city of Thatta after the levee protecting the city was breached, said Manzoor Sheikh, a senior government official. Authorities were trying to repair the levee, about 75 miles (125 kilometers) southeast of the major coastal city of Karachi.

"The situation is getting worse," said local disaster official Hadi Baksh Kalhoro. "The water is flowing into a nearby canal endangering Thatta city."

A second breach occurred in the Soorjani levee in the same region, said Gulab Shah, who is helping relief efforts.

"It is beyond control now," he said. "Thousands of people are sitting with their cattle and belongings and their lives are in danger. They are not willing to leave."

An Associated Press reporter saw dozens of people taking shelter in the Makli Hill burial ground, one of the largest such sites in the world. The graveyard, which is not believed to be in danger, houses the ornate tombs of hundreds of Muslim saints dating from the 14th century.

Protesters blocked a nearby highway with burning tires. They said they heeded evacuation orders, but now had no food, water or shelter.

U.N. spokesman Maurizio Giuliano said about 1 million people have been displaced in Thatta and Qambar-Shadadkot districts since Wednesday.

The United Nations, the Pakistani army and a host of other local and international relief groups have been rushing aid workers, medicine, food and water to the affected regions, but are unable to reach many people.

The Pakistani Taliban on Thursday hinted they might attack the foreign aid workers. The militant network has a history of attacking aid groups, including agencies under the U.N. umbrella.

Militant spokesman Azam Tariq said the U.S. and other countries were not really focused on providing aid to flood victims but had other motives he did not specify.

"Behind the scenes they have certain intentions, but on the face they are talking of relief and help," Tariq told The AP by telephone from an undisclosed location. "No relief is reaching the affected people, and when the victims are not receiving help, then this horde of foreigners is not acceptable to us at all."

The United States - which has launched scores of missile attacks against militant targets in the far northwest over the last 2 1/2 years - hopes to improve its highly unpopular image in Pakistan through its aid efforts. It has deployed 19 civilian and army helicopters to ferry aid and victims.

"We will obviously take these threats seriously as we did before, and take appropriate precautions, but we will not be deterred from doing what we believe we need to do, which is help the people of Pakistan," he told a news conference at U.N. headquarters in New York.

Other aid organizations noted that Pakistan has long been a high-risk environment for foreigners, and said their security plans took such concerns into account.

Underlining the fragile security environment, a bomb at a restaurant in the northwestern town of Mansehra killed one person Friday, local police chief Mohammed Sajjad said. He said police were investigating who planted the bomb and why.
By Associated Press Writer Shakil Adil. Nahal Toosi in Islamabad, Riaz Khan in Peshawar and Ashraf Khan in Karachi contributed to this report