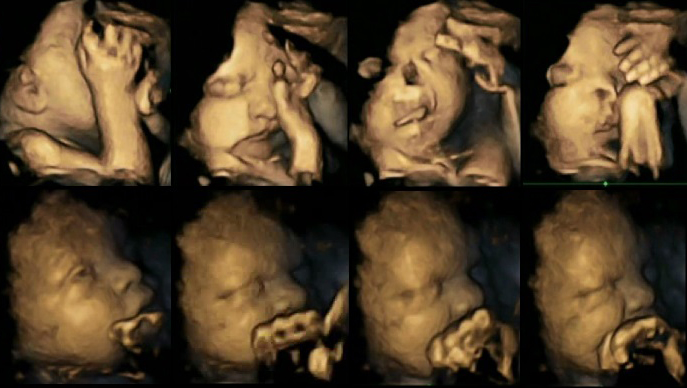 The impact of a mother's smoking can be seen on the face of her unborn baby, new research suggests.

Scientists at Durham and Lancaster Universities in England performed high-definition 4-D ultrasound scans on fetuses between 24 weeks and 36 weeks gestation and spotted distinctive differences in those whose mothers smoked. They say their findings add to the evidence that smoking may harm a developing fetus.

"Technology means we can now see what was previously hidden, revealing how smoking affects the development of the fetus in ways we did not realize," co-author Brian Francis, a professor at Lancaster University, said in a press statement.

The study, published in the journal Acta Paediatrica, involved 20 pregnant women; four were smokers who averaged about 14 cigarettes a day, and 16 were non-smokers. Each woman underwent four ultrasound scans over a three-month period.

The researchers say the fetuses whose mothers smoked showed a much higher rate of mouth movements, suggesting that their central nervous systems, which control such movement, did not develop at the same rate and in the same manner as the fetuses of non-smokers.

All of the babies involved in the study were born healthy. The Centers for Disease Control and Prevention warns that smoking during pregnancy increases the risk of preterm delivery and low birthweight, which can lead to a range of health problems.

Previous studies have found that infants exposed to smoking in utero have delayed speech processing abilities, and the researchers say the ultrasound scans may shed light on that aspect of development.

"This is yet further evidence of the negative effects of smoking in pregnancy," Francis said.

The researchers say more studies are needed, including a look at the impact fathers' smoking may have on their unborn children.