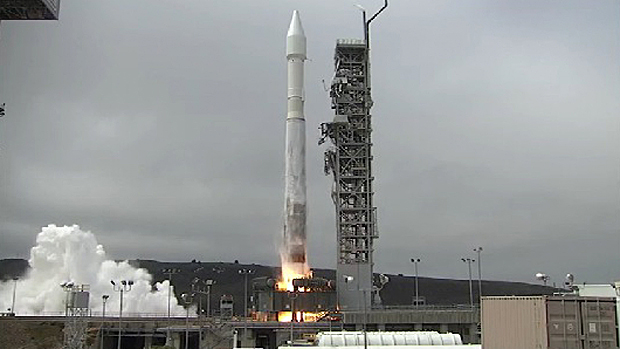 An Atlas 5 rocket blasted off from California and streaked into orbit Wednesday carrying the most powerful remote sensing satellite ever built for the commercial market, a spacecraft capable of zooming in on a baseball field and detecting home plate from an altitude of nearly 400 miles.

With a rush of flame and a billowing cloud of smoke, the 189-foot-tall Atlas 5 thundered to life at 2:30 p.m. EDT (GMT-4; 11:30 a.m. local time), vaulting away from launch complex 3E at Vandenberg Air Force Base northwest of Los Angeles.

Powered by a Russian-built RD-180 first-stage engine, the rocket streaked away to the south over the Pacific Ocean toward a polar orbit where DigitalGlobe's WorldView-3 satellite will be able to image the entire planet as it rotates below.

The RD-180 shut down about four minutes after liftoff, the first stage fell away as planned and a hydrogen-fueled Aerojet Rocketdyne RL10A engine ignited to complete the boost to orbit.

The Centaur stage shut down 16 minutes after launch and a little more than three minutes after that, the 6,200-pound WorldView-3 satellite, built by Ball Aerospace & Technologies Corp., was released into a planned 383-mile-high orbit where it will take the spacecraft 97 minutes to complete one trip around the planet.

Capable of resolving surface features as small as one foot across, WorldView-3 features a state-of-the-art multi-spectral imaging system, a high-speed data downlink operating at 1.2 gigabits per second and control moment gyroscopes that will allow ground controllers to quickly re-orient the spacecraft for on-demand observations.

From an altitude of nearly 400 miles, WorldView-3 offers unprecedented resolution for a commercial satellite.

"Imagine you're in San Francisco," said Neal Anderson, vice president of technology at DigitalGlobe. "With the capabilities of this satellite we could see home plate in Dodger Stadium in Los Angeles. Not only can we see home plate, we can see the players in the field. And if we knew which teams were playing and what color uniforms they were using, we could tell you which team is in the field and which team is batting. We could even count empty seats. And if the stadium scoreboard was big enough, we could tell you the score."

WorldView-3 is the sixth and most powerful satellite in a constellation operated by DigitalGlobe of Longmont, Colorado.

"At DigitalGlobe, we feel very strongly that WorldView-3 is not just an expansion of our constellation, but it's really a major step forward in our ability to fulfill our purpose of 'seeing a better world,'" said company spokeswoman Nancy Coleman.

Government licensing and a recent easing of restrictions on resolution for commercial satellites mean space-based imaging is "really getting into the realm of aerial imagery from airplanes," Jeff Dierks, the program manager at Ball Aerospace, told Spaceflight Now.

Data from WorldView-3 and other satellites in DigitalGlobe's constellation are sold to government agencies, land developers, relief agencies, the oil and gas industry, agricultural concerns, city planners and a wide variety of other users.

"When we scan across an area of the ground, we're actually taking 29 separate images in 29 different color wavelength bands," Anderson said of WorldView-3's sensors. "That allows us on the ground to process the data and turn it into all manner of different products for our customers.

A new shortwave sensor aboard WorldView-3 will even allow the spacecraft to see through haze and smoke. But Dierks said the popular computer program Google Earth "is probably the use most people are familiar with."

"If you've looked up your house on Google Earth, the image taken from space on there was probably taken with one of the WorldView spacecraft," Dierks said.

It will take engineers about two months to activate, calibrate and check out WorldView-3's systems.

This was the 48th Atlas 5 launch and the 87th overall for United Launch Alliance, a partnership between Boeing, builder of the Delta family or rockets, and Lockheed Martin, developer of the Atlas. It was only the 10th commercial launch of an Atlas 5, with the rest used primarily for U.S. military payloads and NASA spacecraft.