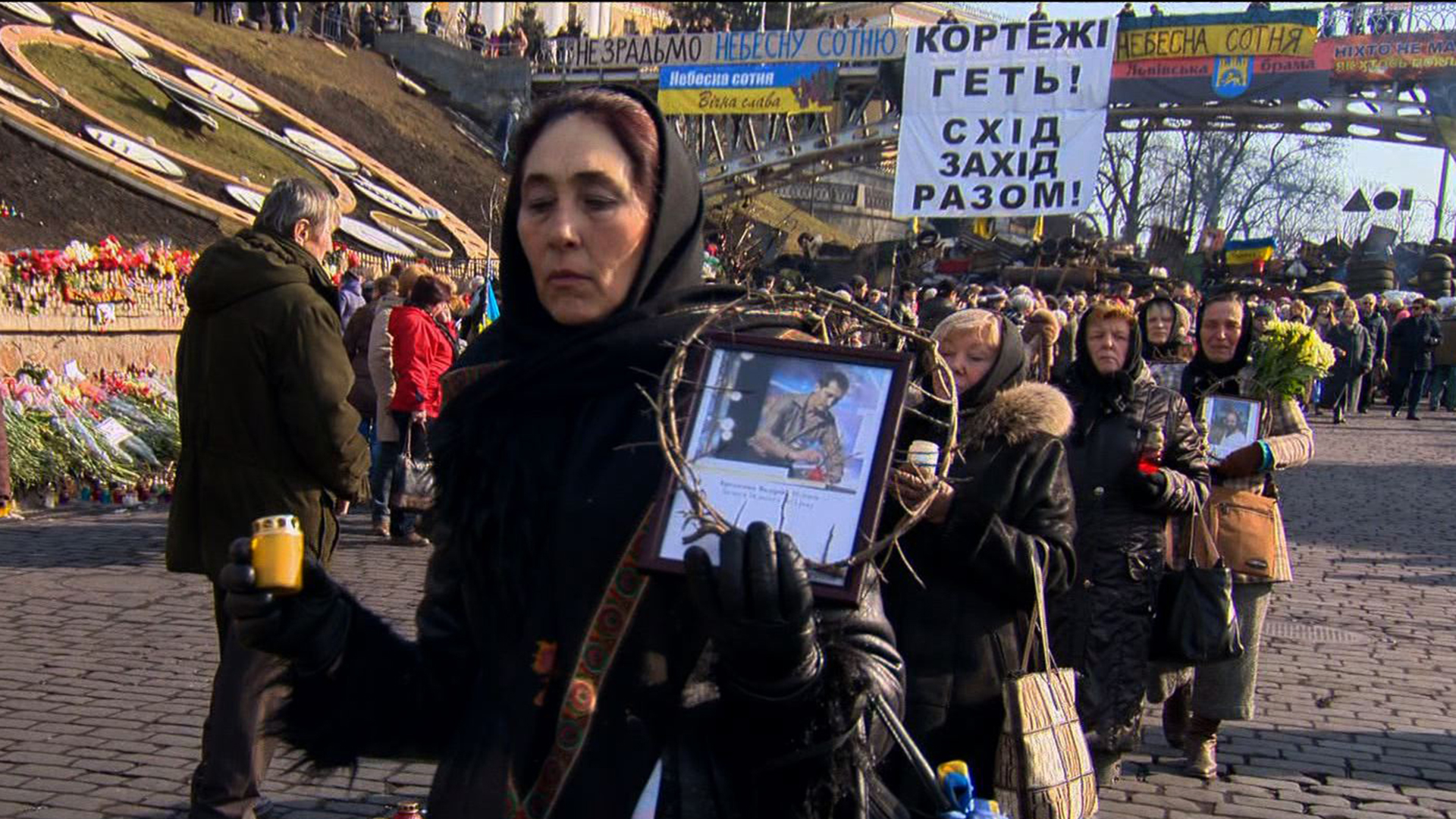 The following script is from "The Heart of the Revolution" which aired on March 9, 2014. Clarissa Ward is the correspondent. Randall Joyce, producer.

Ukraine has been dominating the news for weeks. Nearly 100 protesters were killed in a revolution that toppled the president, after he reneged on a promise to sign a trade agreement with Europe that would bring the country closer to the West and reduce its dependence on Russia. Russia responded to the revolution angrily, seizing control of Ukraine's southern Crimea region and ratcheting up tensions reminiscent of the Cold War.

Our story tonight is about the people behind Ukraine's revolution. What we found was surprising. They are an unusual collection of characters from very different worlds. They came together in Kiev's central square, a place that became a battleground and the heart of the revolution.

This is Independence Square, known as the Maidan, a sprawling community of tents and barricades and European Union flags. Tens of thousands of Ukrainians have been camped out here for three months, braving sniper fire and sub-zero temperatures to topple their government. But this revolution isn't over.

We were surprised to find this past week protesters digging in and building up the barricades. They're here to take a stand against Russian interference and to ensure that the demands of the revolution are met. Already paid for in blood, this real estate is just too valuable to give up.

Sviatoslav Yurash: I think this whole square will remain a very powerful symbol for generations to come.

18-year-old Sviatoslav Yurash is one of an army of young organizers who keep the square running. He's in charge of the media operation. He walked us past the burned out hulk of the building where he lived and worked before government forces attacked it.

Every day people pour in from across the country to lay flowers at the spots where demonstrators were gunned down.

At times, it almost seems the protesters are re-enacting revolutions of the past. One major intersection is now guarded by a medieval-looking catapult. Soup is cooked in wood-fired boilers that look like steam locomotives. This woman has been ladling out that soup for months now.

Clarissa Ward: How long will you stay here?

Woman, translated: However long it takes.

These people see themselves as guardians of Ukraine's revolution. It's hard work. Squads of volunteers clean up debris from recent battles while others chop wood. Night and day self defense units in camouflage uniforms patrol the square. For many, tents are the only shelter against the cold.

Clarissa Ward, entering tent: Can we have a look inside?

Sviatoslav Yurash: Of course we can.

Clarissa Ward: There are people sleeping.

Sviatoslav Yurash: Every day for the last three months, there have been people here sleeping, eating, they've been working, they've been essentially doing everything they can to help the Maidan continue.

We were struck by how well organized and well supplied the Maidan is -- most people don't realize this but Ukraine's revolution was not your average populist movement. It was supported by some of the most powerful people in the country, like billionaire Petro Poroshenko, one of a handful of incredibly wealthy and influential businessmen known as the oligarchs -- though he bristles at that term because unlike other oligarchs, Poroshenko didn't make his money privatizing state industries after the collapse of the Soviet Union, he made it through chocolate.

Petro Poroshenko: I'm not expert on oligarch. My-- but-- because-- to explain you. But--

Clarissa Ward: You don't consider yourselves an oligarch?

Petro Poroshenko: For sure. Not-- but people not consider for me. Because-- many of the--

Clarissa Ward: But you're the seventh-richest man in Ukraine?

Seeing billionaires on the barricades may come as a surprise, but for Petro Poroshenko, the rampant corruption of Yanukovych's regime was simply bad for business.

Clarissa Ward: Why do you think the oligarchs started to support the Maidan protest movement?

Petro Poroshenko: First of all, this is about the values. The values, the justice, the absence of the corruption, the fair system of the courts when everybody can defend themselves. If you're asking me, "What is that?" In one word it is just modernize my country.

Clarissa Ward: Where does the money come from to fund this protest movement?

Petro Poroshenko: There is no sponsor of Maidan, please believe.

Clarissa Ward: So you're saying you haven't given any money to this movement?

Petro Poroshenko: No. This is not true. But I was together with many people. I am not giving more money than the maybe hundreds of thousands people, please believe.

Clarissa Ward: Surely you can't be implying that this revolution could've happened without the support of this country's uber-elite businessmen, the so-called oligarchs?

Petro Poroshenko: Not at all. That was not the movement led by the politician. This is not true. And this was not a movement-- organizing by the oligarch, which is completely not true. People-- this is first time in our history, people go in the street by millions of the people demanding not rising up salary not lowering up taxes, or not moving something. They're demanding the modernization of the country.

Clarissa Wrd: How much time did you spend in the square during those months?

Petro Poroshenko: Almost all the time. So if you-- if you want the people-- being with you, you should be together with the people. That's important.

With his high profile role in the revolution and a seat in parliament, Poroshenko is widely regarded as a likely candidate to be prime minister.

If Poroshenko is the CEO of the revolution, then retired heavyweight champion Vitali Klitschko is its face. He now leads a parliamentary block. When Secretary Of State John Kerry flew to Kiev this past week to meet with the country's top leaders, Klitschko was right beside Poroshenko.

Klitschko is used to being the center of attention. He has won 15 heavyweight championship fights. But now he's going for a different title: president. The election is in May. It may be his toughest fight yet.

Vitali Klitschko: In sport, we have a clear rules. If you break rules, you will be disqualified.

Clarissa Ward: But in Ukrainian politics there are no rules?

Vitali Klitschko: In the Ukraine, no rules.

Clarissa Ward: No rules and violence?

Vitali Klitschko: No rules and violence.

This is what Ukraine's parliament looked like before the revolution, when Klitschko became a party leader.

When the protests began, Klitschko tried to be a voice of moderation. At one point he was even attacked by more extreme elements of the movement.

But it was the government's bloody crackdown that really shocked him. More than 70 protesters were killed in one day, the center of Kiev was on fire.

Vitali Klitschko: We never expect the police will use guns.

Clarissa Ward: Shooting their own people.

Vitali Klitschko: Yeah, and shooting we own people, and using snipers.

Clarissa Ward: What was your reaction when you saw that?

After the horror of the killings came another shock. President Yanukovych fled the country to Russia and protesters who had endured a brutal winter in the square were told that $37 billion was missing from government accounts. They got a glimpse of where some of that money may have gone when Yanukovych's private home was opened to the public.

Yurash was one of the first to get inside.

Clarissa Ward: I mean, this is what your revolution was about, in a sense, this opulence, this complete lack of respect, almost.

Sviatoslav Yurash: This complete lack of taste as well, on top of that.

Clarissa Ward: On top of that.

Sviatoslav Yurash: -- this is all stolen money. This is all bribe. This is all corruption. This is nothing that he earned. This is a man who is sitting two times in prison, one of them for stealing hats, and now he builds this Versailles for himself.

The house has become an instant tourist attraction with entrepreneurs outside the gates hawking maps of the estate. Documents found on the scene indicate that Yanukovych spent $30 million on the chandeliers alone. A private elevator adorned with Swarovski crystals can't have been cheap either. Some activists want this to be turned into a museum of state corruption. There is certainly a lot to see, including a boat that was used for dinner parties and a private zoo.

Remarkably, there was almost no looting when the house was taken over. When we sat down for a chat in the lavish main hall, flower arrangements from the last days of the old regime had just begun to wilt.

Clarissa Ward: For an ordinary Ukrainian person, what's their reaction to this?

Sviatoslav Yurash: Shock and outrage. We all knew Yanukovych was corrupt. We all knew he stole money. But the quantity of it is mind boggling in every way.

Yanukovych is now gone. But his allies in Russia are not letting go. As the world saw first hand when Russian forces moved into Ukraine's southern Crimea region.

Clarissa Ward: You fought Viktor Yanukovych and you won. Are you ready to get in the ring with Vladimir Putin?

Vitali Klitschko: Some new kind of Soviet Union. But without Ukraine, it's impossible to do it.

Clarissa Ward: But you've said before no fight, no win.

Vitali Klitschko: No fight, no win.

Clarissa Ward: So are you ready to fight?

When the billionaire Petro Poroshenko flew down to Crimea on his private jet to negotiate, he was chased away by an angry pro-Russian mob. This may be the revolution's biggest challenge yet, a showdown with a much more powerful neighbor.

Clarissa Ward: Do you want to see America take stronger action against Russia?

Petro Poroshenko: My answer would be America should use all instruments which held in their disposal to stop--

Petro Poroshenko: --to stop the war.

On the Maidan, there are now religious services for the dead every day and constant cries from the crowd that "heroes never die." But many Ukrainians are tired of fighting. The victory of this revolution has come at a horrifyingly high price.

Vitali Klitschko: Is difficult, because I feel-- some part of responsibility for the people I take over as politician. People go behind-- behind me, and people died. I still alive.